Viewpoint: Making the Union a Personal Choice Gives Ground to the Boss 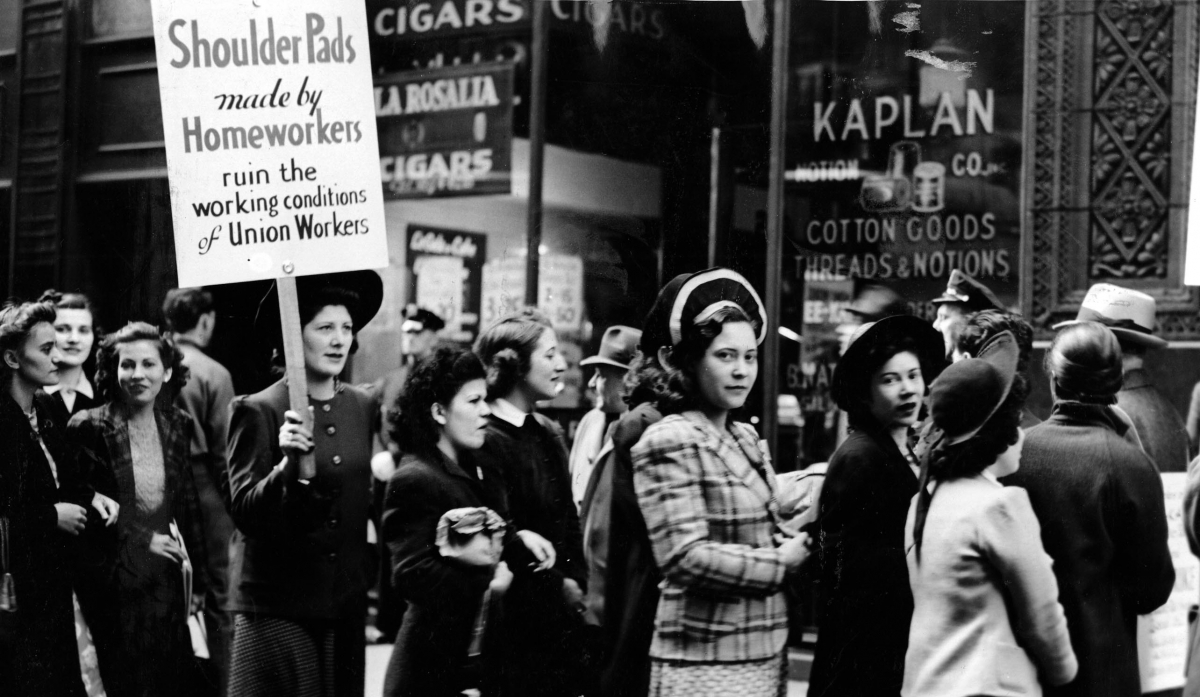 Traditionally labor has rejected the idea that individuals should have the option to undercut the rest of us. These Garment Workers (ILGWU) Local 142 members picketed in New York's garment district for union-made shoulder pads, 1930. Photo: The Kheel Center for Labor-Management Documentation and Archives (CC BY 2.0)

Now that the open shop is the law of the land in the public sector, it’s natural for unionists to ask, “Why should we represent the freeloaders?” and consider giving up exclusive representation, opting instead to bargain for and represent only actual members of the union.

But employers love this position—because for the last century and half, it’s been their position.

From the open-shop movement of the early 1900s to the anti-union Taft-Hartley Act in 1947 to opposing public-employee unionism in the 1960s, employers have always rejected the idea that unions represent more than a collection of individual workers.

The Janus decision is not simply a hit on dues collection or who contributes for arbitrations. Though employers love to starve unions of cash, what’s really in dispute is control of the workplace.

Eliminating agency-fee provisions is a way to destroy solidarity. We shouldn’t take the boss’s bait by scaling back who we represent.

FALLBACK FROM THE FALLBACK

Unionists, it’s important to remember, did not come up with the agency-fee framework.

Instead, unions traditionally set their sights much higher and claimed to represent workers in an entire industry—or even the entire working class.

This was true of the relatively conservative American Federation of Labor in the early 1900s, the radical Industrial Workers of the World, and the Congress of Industrial Organizations from the 1930s through the 1970s.

This wasn’t just an ideological choice; it was the only way to set industry-wide standards for wages and conditions.

Labor rejected the idea that individuals should have the option to undercut the rest of us by selling their labor at less than the union rate. Those who crossed picket lines were deplored as scabs.

By insisting on a closed shop, which required hiring only union members, unions weren’t mainly securing dues payments—we were challenging management for control of the workplace itself.

Unionists of this era also rejected the idea that class struggle was confined to a single enterprise. Instead, unions sought to speak for all workers in a given industry, bargaining agreements that covered hundreds of thousands of workers. By the 1950s, such major industries as mining, steel, and trucking had master agreements covering hundreds of employees and hundreds of thousands of workers. By the late 1960s, 400,000 truck drivers were covered by the Teamster National Master Freight Agreement.

Winning such a contract often required striking many employers at once—there’s power in numbers. For instance, 500,000 steel workers struck for months in 1959, crippling industry across the United States and forcing President Eisenhower to intervene.

Employers, meanwhile, argued that joining or not joining the union, and crossing or not crossing the picket line, were individual choices. They landed a major blow against solidarity and union power when they outlawed closed shops in the Taft-Hartley Act of 1947.

The agency-fee arrangement was labor’s fallback after Taft-Hartley, a weaker substitute for the closed shop. Workers could not be required to join the union—but they could be required to pay the cost of certain core representation, such as bargaining and grievance processing. Subsequent Supreme Court decisions further eroded these fees.

‘SPEAK FOR YOURSELF,’ EMPLOYERS URGE

Now we are told that we should fall back from our fallback position and give up one more vestige of control over the workplace—the union’s claim to represent everyone.

Historically, labor made its greatest gains when our tactics broke free of the single-employer framework imposed by labor law—when we acted on behalf of, and in the interests of, the whole working class. Unions occupied or blockaded plants, disrupted entire cities, and prevented anyone from scabbing on the union by crossing the picket lines.

In an era of weakness and decline, it’s easy to forget the power labor once held. Today under 7 percent of private sector workers belong to unions.

But embracing the employer’s ideas rarely helps. We’ve been down that road before—the labor-management cooperation schemes of the early 1990s, born of weakness and desperation, proved to be a dead end for unions. Pragmatic acceptance of the Janus framework promises a similarly dismal result.

The big breakthroughs are never based on little ideas or accepting present realities. Think of the most exciting labor events of the last couple decades—the Wisconsin uprising, the recent red-states teacher rebellions, the Fight for 15, or the Verizon strike.

These struggles insisted that labor is bigger than a collection of individuals, and that our demands are made on behalf of the entire working class.

Joe Burns is the author of Reviving the Strike and Strike Back: Using the Militant Tactics of Labor’s Past to Reignite Public Sector Unionism Today.