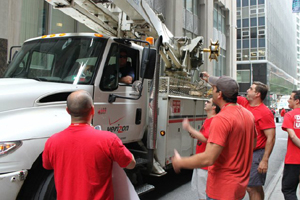 Joe Burns argues that for unions to win again, they need to wage strikes that shut down production. A test case is underway: will the 45,000 CWA and IBEW members who have struck Verizon be able to stop enough work to cause the company pain? Photo: Verizon East 2011 Mobilization.

In a refreshingly straightforward style, Joe Burns argues persuasively that the cause of union decline is our inability to wage a successful strike. That is, one which shuts down production and compels the employer to accede to union demands.

His new book, Reviving the Strike, details the decades of anti-union legislation, National Labor Relations Board decisions, and Supreme Court rulings that have outlawed everything that works: sympathy strikes, bans on replacement workers, secondary boycotts, and other muscular tactics that gave unions a fighting chance.

Every tactic unions have substituted for the production-stopping strike has proved inadequate. Corporate campaigns that focus on investor pressure and media shame tactics aren’t able to bring enough real pressure on decision-makers. Coalitions with community and faith groups, positive as they are, have not proved sufficient to tame multinational corporations and financiers. One-day “publicity strikes” are easy for employers to weather. New organizing to increase union density has proved largely unsuccessful, because employees won’t join ineffective organizations.

To save itself, Burns argues, labor must now defy or circumvent the legal limits and stop production.

Burns, a former union officer and current union negotiator and attorney, builds his case from the long list of heroic labor defeats of the past 30 years, illustrating our inability to even maintain the status quo while operating within the bounds of the current legal framework. Workers are paying the price. Real weekly wages have fallen, health care costs have soared, and the number of workers participating in defined-benefit pensions has plummeted.

Yet, against all odds, workers and their unions continue to fight back against the intolerable demands of their employers. Burns describes five struggles in which unions dared to fight outside the box—defying injunctions, building solidarity, sitting in, and organizing civil disobedience (Pittston Coal, Hormel P9, Staley, the Charleston 5, Republic Windows and Doors). Though some of these strikes ended in defeat, they illustrate the possibilities of old-fashioned militancy and ultimately prove that you cannot win if you do not fight.

A Strike Played by the Rules—and Won

Another example, not included in Burns’s analysis, is the 2010 strike of 1,500 registered nurses and professional/technical staff represented by PASNAP at Temple University Hospital in Philadelphia—my hospital.

We, too, found our employer’s demands intolerable for ourselves and unsafe for our patients. In addition to the usual laundry list of wage, health care, and pension givebacks, the hospital illegally eliminated the longstanding dependent tuition benefit and insisted on a non-disparagement clause, which would discipline members and fine the union for making any negative public statement about Temple.

Our 28-day strike tested the bounds of, but remained squarely within, the “system of labor control,” Burns’s shorthand for the legal framework that limits union activity.

Our picket lines were big and loud, but we never stopped a scab from entering the hospital and we were never enjoined. We sought and received solidarity from nurse unions across the country, area unions of every stripe, students at the university, faith leaders, and local politicians. Our tactics kept pressure on the university leadership as well as that of the hospital, both of which depend on taxpayer money to survive.

Through concerted, organized struggle, we pushed back 90 percent of Temple’s concessionary demands and strengthened the resolve and unity of our union. We were forced to accept large increases in our health care costs, but phased them in, allowing annual and step increases to partially offset the blow.

Our victory confirms many of Burns’s assertions. He allows that skilled workers, in special circumstances, can prevail. Though 850 scabs were doing our work, at up to $10,000 each per week their price became a limiting factor.

Clearly, if a union is going to halt production, it must prevent temporary replacements from working. Earlier this year, National Nurses United successfully employed a new and legal tactic to keep scab nurses out of the hospitals. The national union coordinated the strike deadlines of six hospitals, from Maine to California, to fall within the same week. Scab agencies can staff one hospital with nurses, but not six simultaneously, spread over the continental U.S. Five of the six institutions settled before their strike deadline.

For his part, Burns details some benefits of such time-limited strikes, when the union announces in advance that it will stay out for a short time, but he admonishes unions, particularly the Service Employees (SEIU), for abandoning the production-stopping strike and replacing it with the one-day publicity strike.

The Achilles heel of all the struggles Burns highlights has been the employers’ ability to permanently replace strikers. At Temple we benefited from another significant advantage shared by few of our brothers and sisters: There is no precedent for permanently replacing public sector workers in Pennsylvania. The extent of this advantage is difficult to overstate.

As Richard Trumka quipped, “We need to quit thinking not losing is winning.” Our settlement at Temple was a victory in this time and place. Just as surely, it was a defensive struggle, an all-out, month-long fight to keep what we had.

As I write, a new case study is unfolding in which Burns’s ideas will be tested: 45,000 CWA and IBEW members have struck Verizon from New England to Virginia. Will strikers be able to stop enough of Verizon’s work to cause the company pain?

In Pennsylvania, the strikers prevented managers from driving the trucks out of the garages, and nothing moved in or out of most central offices. The few trucks that did get out were chased down by flying squads and trapped at the job site for hours.

For this, the union has been enjoined, with pickets kept 15 feet from any scab and limited to six at each entrance. As the injunction is enforced, trucks begin to roll and offices are staffed.

CWA President Larry Cohen encouraged his members not to think of this as a traditional, stand-in-front-of-the-building strike, but a get-everyone-involved and think-different kind of strike. Will “thinking differently” mean defying the injunctions? Can 45,000 workers in a critically important industry prevail against a corporate giant, flush with cash, without stopping production?

The aim of Reviving the Strike is to spur a much-needed debate in the labor movement about the way forward. Burns’s analysis is rich for discussion, but his exploration of the solutions left me wanting more. His thesis rejects the many substitutes for production-halting strikes, but leaves the reader wondering, “Where do we go from here?”

The labor movement needs to be in a place where it can wield power as Burns suggests, but how do we rebuild to get there?

Burns’s sole concrete suggestion on how to overcome the “system of labor control” is to create new organizations, to shield the assets of the established union from the inevitable fines resulting from illegal, but effective, militant action. But what would stop courts and legislators from criminalizing these new organizations, as they have every other successful tactic?

Throughout the book, Burns has few positive words for the Democrats, noting the willingness of Democratic governors to send in the National Guard to break strikes and the unwillingness of Democrats in Congress to support legislation important to labor. He maintains that swapping out Republican appointees to the NRLB or the Supreme Court for Democrats will not change the system.

This is no reason to abandon political action. Although Burns never calls the question, his reasoning points to the need for an independent, union-based party willing to transform, not amend, labor law. Let’s defy the injunctions while we build something that would eliminate them forever.

Marty Harrison is a Temple staff nurse and executive board member at the hospital's PASNAP local.

Related
Strike Wave Rocks Britain, as Unions Confront the Cost-of-Living Crisis »
‘No Contract, No Matisse’: Philadelphia Museum of Art Workers Win First Contract After Strike »
The Right to Strike Is at Stake on the Railroads »
Video Game and Tech Workers ‘Drop the U-Word’ »
St. Louis Boeing Plant Workers to Strike »

I agree with Burns that we need to revive the strike as a real, not symbolic, weapon of class struggle. And I agree with Harrison that we also need to build a working-class political party.

However, a "union-based party" would have great difficulty being effective. Unions encompass everyone in the workplace, including those with conservative and right-wing views.

We need to build a party of and for workers that can challenge the rule of capital over labor. That party would have to be built outside the unions, while including the best union militants and also militants who are not (yet) in unions.

Anything less can only protest the assault on our living standards, not end it.

We really need to quit grovelling and cowering in the face of injunctions. There are places in the world where going on strike can get you shot and our union leaders fear lawsuits? If it means dispensing of all of our union assets and going back to the days when union officials were unsalaried part time volunteers then we definitely should go that route!

We have freedom of speech, freedom of assembly and freedom of the press in this country and the worst thing American labor ever did was allow the government to infringe on those rights just so we can use the services of the toothless pro management NLRB!

Strikes are won and lost on the picketline and we can't win unless we can stop production and stop the scabs by any means necessary!