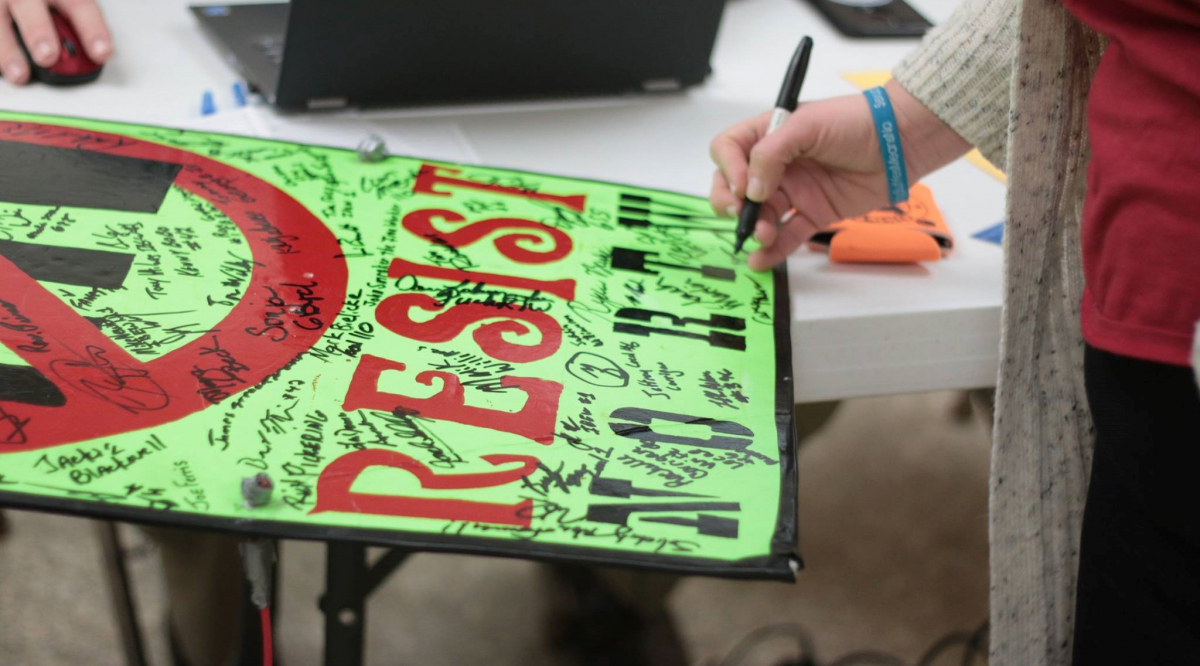 Unions in Missouri are declaring victory after voters shot down a Republican-backed “right-to-work” law by a hefty 2 to 1. Photo: Vote No on Prop A Facebook page

Unions in Missouri are declaring victory after voters shot down a Republican-backed “right-to-work” law by a hefty 2 to 1.

Missouri became the 28th state with a right-to-work law on the books in February 2017, when Republican Governor Eric Greitens signed the law at a ceremony in an abandoned factory.

In response, thousands of union members hit the streets to gather enough signatures to trigger a referendum vote that could repeal the law. Over the course of six months, activists gathered 310,567 signatures—more than three times the number needed. Right to work was put on hold until voters could decide.

Most of the signatures were gathered by volunteer rank and filers. Labor educator Judy Ancel wrote for Labor Notes last summer about how the drive energized local unions:

Brian Simmons of Machinists Local 778 took on a coordinating role in very red Cass County, south of Kansas City. He was elated with the newcomer activists from various unions. “They began saying ‘Brother and Sister,’” he said. “You ask ’em to turn out, and they do. They ask, ‘How can we do better?’ We had people asking where to go when they got run off a spot. They’d be willing to go across town, telling me, ‘I’m on it.’

“Our August union meeting rarely gets a quorum, but we had a packed house, and the first thing they wanted to know was ‘how are we doing?’ We kicked ass.”

“We have more attendance at meetings. People are asking about stuff to do. Something like this gives people hope. We have nominations on Friday, and I think we’ll get more candidates than before.”

At first the referendum vote was set for this November, but Republican lawmakers moved the date up to August, hoping to hurt the referendum’s chances by suppressing voter turnout—and to avoid a November uptick in union voters that could give Democrats a boost.

An employer-backed group also circulated a petition to institute right to work through an amendment to the state constitution. Despite nearly $1 million spent, that effort failed.

The labor movement’s victory owes to the turnout of union members at the polls, but also to appeals made to nonunion workers at doors and in parking lots across the state. Shannon Duffy of the United Media Guild in St. Louis gave us a sense of these conversations on our site yesterday:

Last week I spoke with a nonunion single mother. We did not discuss fair share. Instead, we talked about the myriad issues workers face in our state. While talking about medical coverage (and her lack of it) I asked her if she thought our odds were better for expanding Medicaid in this state with a strong union movement or with a weak one? And that is when she got it.

If we want to help the tens of thousands without insurance and expand Medicaid, or improve workers lives in countless other ways, it will take a well-thought-out, organized, and sustained campaign. So a strong union presence serves her self-interest—and other nonunion workers like her—because unions are the vanguard for social change.

A weak union movement helps no one except the Koch brothers and their ilk. And the bosses. Bosses love weak unions.

For Missouri labor movement old-timers, this week’s win is a satisfying reprise. Forty years ago, the National Right-to-Work Committee tried to pass right to work by referendum.

Initial polls suggested it would pass 2 to 1, and even get the votes of a majority of union members. National labor leaders feared that a loss in Missouri might trigger a domino effect in other union stronghold states.

Jerry Tucker, then a D.C.-based staffer for the United Auto Workers, returned to his home state to manage the 1978 campaign against right to work—which put together the strongest coalition of progressive forces Missouri had ever seen, registered an estimated 100,000 union members to vote, and dealt Republicans a lasting defeat. Voters rejected the referendum 3 to 2.

In a 2011 article for Labor Notes, Tucker explained how they did it. The campaign had a coordinated strategy, but it was a grassroots affair. Tucker wrote:

The United Labor Committee, a statewide body with representatives from the AFL-CIO, UAW, Teamsters, and Mine Workers, raised $2.5 million to run the campaign against right to work. Twice the committee requested donations from member unions equivalent to 50 cents per member.

Some unions asked locals or internationals to cover the donation. Some, like the UAW, went directly to the membership—which had important benefits. Members were educated about the campaign and gained a personal stake once they reached into their own pockets.

For example, Local 93 in Kansas City produced buttons: “I fought against the RTW.” One person on each line was assigned to sell the buttons and inform people of the dangers of RTW. Some paid a dollar; others gave as much as $100. The women’s committee sponsored a dance to augment the collections.

The campaign was three-pronged: First was voter registration, get out the vote, and rank-and-file action. Second was communication through the media, direct mail, and phonebanking. Last was coalition building…

Rank-and-file unionists were the mainstay of the campaign. In fact, some couldn’t seem to do enough, and at the outset thought their leaders weren’t doing enough.

While the labor committee was still ramping up, members were acting on their own. They set up meetings, visited the merchants with whom they did business, painted signs on their cars, and worked the polls.

Many traveled from urban areas back to their childhood homes in rural Missouri to urge folks there to vote “no.” On weekends, caravans of urban and suburban workers traveled to meet farmers and small-town shopkeepers to make their case against RTW.

Motorcyclists cruised the highways in bunches, with banners opposing RTW. Truckers used CB radios to maintain a steady stream of anti-RTW conversations on the interstates.

Missouri isn’t the first state to repeal a right-to-work law. Indiana’s open-shop law, passed in 1957, was so unpopular that it was repealed eight years later in 1965.

In a 2011 referendum, voters in Ohio shot down Senate Bill 5, which would have limited the collective bargaining rights of public sector unions and imposed the open shop on the public sector.

There too the effort relied on a vast number of volunteer signature-gatherers and a coalition that stretched far beyond unions. John McNay, a former chapter president of the American Association of University Professors who wrote a book on the campaign, reported in Labor Notes:

We Are Ohio’s coalition was very broad: professors, Steelworkers, secretaries, ministers, Teamsters, police, nurses, students, firefighters, auto workers, and janitors. Unions were obviously prominent, but we had organizations behind us as diverse as the Amos project (a Catholic social justice group), Black ministers groups, the Blue-Green Alliance of the Sierra Club, and the Farmers’ Union. Even the Catholic bishops came out against SB 5.

To get an idea of the scale of the campaign, during the petition drive to get SB 5 on the ballot for repeal, we had 10,000 volunteers. They spread out across the state, gathering a record 1.3 million signatures (though only 242,000 were needed).

When the parade arrived at the secretary of state's office with a semi-truck to deliver all those petition booklets, a structural engineer had to be called in to see if the building's floor could take the weight.

These stories have a common lesson. Business groups often rely on courts and state legislatures to force through unpopular anti-union policies. But they can be stymied by democracy.

Chris Brooks is a staff writer and organizer with Labor Notes.chris@labornotes.org

Alexandra Bradbury is the editor of Labor Notes.al@labornotes.org
Related
Richmond Educators Are First In Virginia to Win Bargaining Rights »
Janus for the Rails and Air? »
Why Missouri 'Right to Work' Went Down in Flames »
Viewpoint: Unions Aren’t Exclusive Clubs—We Fight for All Workers »
Viewpoint: How to Talk with Nonunion Workers about ‘Right to Work’ »