Wisconsin Republicans will start feeling nervous soon because of people like Karl Gartung, a Teamster at UPS cartage services in Milwaukee who's been out collecting signatures to recall his state senator.

UPDATE: The auction action has been canceled. Esterline Technologies improved its severance offer--on the condition that UE Local 204 not attempt to stop the auction. The local said that more than $600,000 for 85 members is at stake. More information will be forthcoming.

Would you give up a piece of your pension for a signing bonus? That’s just what President Obama’s proposed “payroll tax holiday” is like (such a jolly name—and just in time for the holidays, too). But the long-term effect is to beggar Social Security, and eventually cut benefits. That $15-a-week bonus now may end up costing you far more in the future.

It's not too late to call. Call today while this issue has your senators' attention.
Don’t want your mom’s Social Security benefits cut next year, or your son’s retirement age raised? Join the big call-in today, promoted by a host of organizations from unions to retiree groups to women’s organizations. Call Congress toll-free at 866-529-7630 to say: Hands Off Social Security! Read about the robbery plan here.

No Vote Allowed on Half Wages in Detroit-area Auto Plant

The United Auto Workers have signed an agreement to let General Motors pay half wages to 40 percent of its employees at a suburban Detroit assembly plant. The “Tier 2” workers would make roughly $14 working alongside so-called “legacy” or Tier 1 workers making the current production wage, about $28. 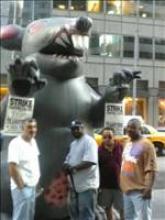 It’s 12 feet long, with a tail, claws, and sharp teeth. It’s only a gray balloon, but the rat strikes fear in the hearts of New York City building managers.

Half Wages? Bring Out the Rat, Say NY Movers

The inflatable rat is back, as New York City Teamsters strike to say it’s not fair to pay some movers $16-$22 an hour and others—mostly Black and Latino—just $8.

Less than 6 percent of Ascension Health’s 110,000 workers are union members, but apparently that’s 6 percent too many for the country’s largest Catholic health system. Management is on a concerted campaign to bust unions at its hospitals in Michigan, say the Teamsters, the Michigan Nurses Association, and their ally Interfaith Worker Justice, a national organization that works with religious leaders.

GM workers in Saginaw, Michigan, voted down drastic concessions by a big margin June 17. It was the second time in three months that GM workers already working at substandard pay refused to be chopped any further.

As the U.S. Social Forum approaches, here in Detroit, we at Labor Notes have been talking a lot about how unions can work with other movements to pursue common goals. In Brazil last week, I was lucky to meet activists who had a terrific example: a metalworkers union that helped organize a movement of poor people to take over vacant land and build houses for themselves.