Newswatch: Summer Vacation (or Not), Disneyland Coup, Interns' Revenge, Does Someone Have to Go?, and More 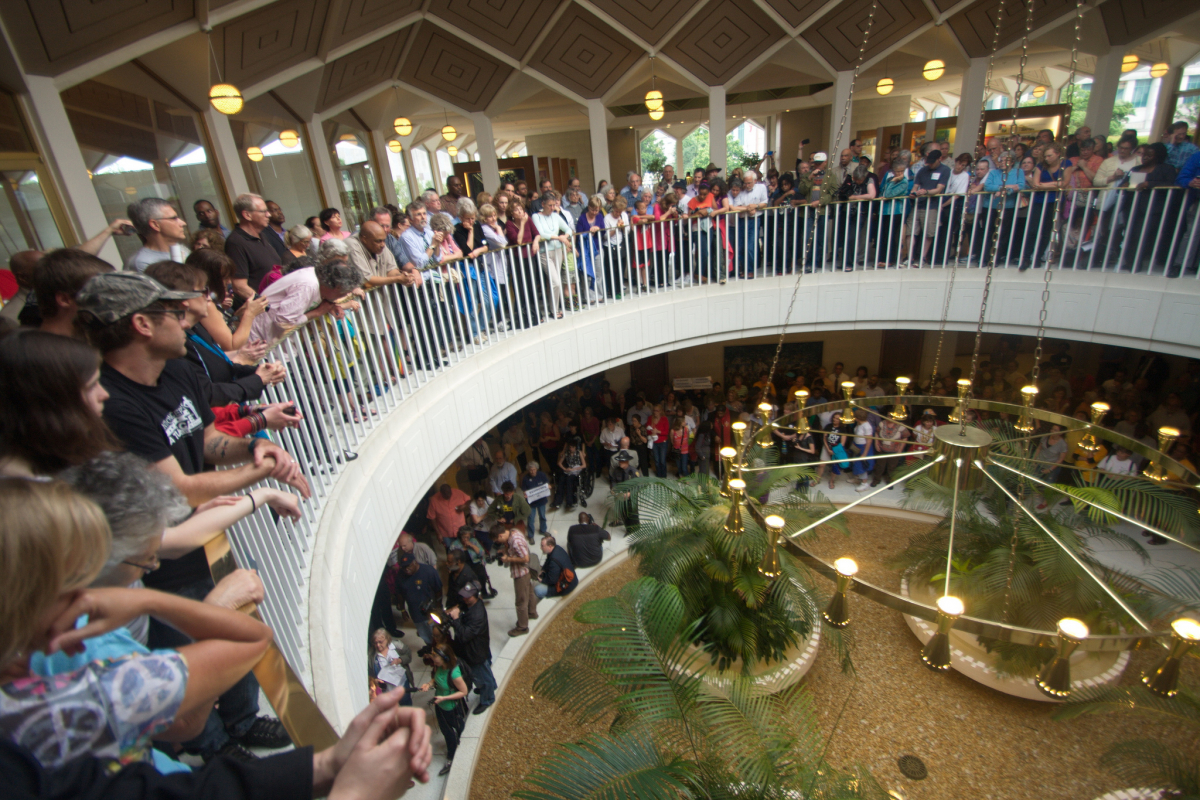 At least 388 people have been arrested in North Carolina's "Moral Mondays" protests over the past six weeks, as union and community activists battle Republican legislators' concerted attack on nearly every right you can think of. People on the bottom level get arrested—for singing—while those on the upper level applaud. Photo: David Biesack.

Watch your mailbox: Labor Notes #412, July 2013, hits the presses tonight (and if you're not yet a subscriber, there's an easy fix). Here's a sneak peak at this month's Newswatch column:

Enjoy your summer! A report from the Center for Economic and Policy Research shows that the U.S. is the only well-off country not to mandate paid holidays or vacation. Workers here are legally entitled to zero of each. Germany, considered the most prosperous country in Europe, requires 24 vacation days and 10 paid holidays. Even workaholic Japan orders 10 days of vacation and nine holidays.

Meanwhile, Florida enacted a law prohibiting cities and counties from mandating paid sick days, as some cities in other states have done. Similar state bills or laws to preempt cities from doing the right thing now exist in at least 13 states. In a poll, 80 percent of Florida residents said workers should be able to earn paid sick days.

Employers flock to wellness programs in hopes they'll save money on health care—but a new study says they don’t. Among 600 programs studied, RAND found an average monthly savings of $3.46 per worker—not statistically significant. Employees trying to lose weight dropped an average of a pound a year. At one large employer, inpatient costs fell, but other costs like doctor visits and drugs rose—and the program itself cost $500,000 a year. One benefits manager criticized “the utter lack of metrics and really, the utter lack of thought” that have gone into adopting wellness programs, blaming a “herd mentality.” But the most “advanced” programs charge workers higher insurance premiums if they don’t meet fitness goals. That could explain the herd’s excitement.

A 5,000-member local of Disneyland culinary workers faced down a trusteeship attempt by the Service Employees May 29, mandated after local leaders voted to disaffiliate from the international. When the trustee showed up to take the union hall keys, the local president called the cops on him—and kept the building. Local 50 was a UNITE HERE affiliate until 2009. According to a suit the local has filed, it agreed to switch to SEIU’s Workers United arm on certain conditions, including financial autonomy. After SEIU changed the terms of the deal in January, Local 50 wanted out.

Good precedents were set for low-paid—or unpaid—workers in a couple of recent rulings. The National Labor Relations Board said contingent teachers—nearly half the faculty—at Pacific Lutheran University may hold a vote to form a union. The college, in Washington State, had argued it was exempt from NLRB jurisdiction because of its religious affiliation.

And a federal judge ruled against unpaid internships except in very limited situations. The judge said that, for an employer to get away with zero wages, the intern should get training in the field (rather than answering phones and picking up lunch), the experience must be for the benefit of the intern and not to the advantage of the employer, and the intern must not displace paid employees. College credit or resumé boosting does not make up for absence of a paycheck, said the Manhattan judge in his ruling against Fox Searchlight Pictures.

A new workplace-themed reality show asks, “Does Someone Have to Go?”—and they don’t mean the boss. It’s like "Survivor," but in real life: the show pits workers against each other to choose who gets fired. What a propaganda coup for corporations, New York Times reviewer Jon Caramanica wrote, “reinforcing the idea that what’s wrong with the American workplace is the workers.”

At least 388 people were arrested in weekly “Moral Mondays” protests in North Carolina in May and June, battling aggressive legislative attacks on nearly every right you can think of. Republicans, who control all branches of government in the state, have proposed cutting off unemployment benefits and the earned income tax credit, instituting school vouchers, repealing the Racial Justice Act (which allows death row inmates to get their sentences commuted to life if they can prove racial bias at trial), refusing Medicaid expansion funds, restricting early voting, adding a Voter ID law, enshrining the state’s ban on public-sector collective bargaining in the constitution, and more. “It’s just vicious, ugly,” said letter carrier Shafeah M’Balia. Unions and civil rights groups, among others, organized the protests.

How a (Million-Dollar) Bill Becomes Law: Nearly two-thirds of Congressional staffers say meeting with corporate lobbyists is helpful to them in formulating policy. Even more, 71 percent, find meeting with CEOs useful, and 65 percent say corporations are very or somewhat trustworthy. Alas, less than half say unions are trustworthy, and only 45 percent like meeting with labor leaders or lobbyists. And the figures for these staffers’ bosses are probably even worse. One union president noted to Labor Notes recently that labor can count on only seven votes in the Senate—a recent uptick from four.

Wasn't that satisfying? Why not subscribe and get your guaranteed dose of Labor Notes every month, straight from the hands of a union letter carrier?

Alexandra Bradbury is the editor of Labor Notes.al@labornotes.org
Jane Slaughter is a former editor of Labor Notes and co-author of Secrets of a Successful Organizer.
Related
Employers' Productivity Standards Are Not Real Science. Here's How to Push Back »
GEICO Workers Launch Union Effort, Management Says Call the Cops »
Before Your Strike Vote, Consider a Practice Strike Vote »
Frontier Strikes Get First Aid Kits Updated, Win Back Work »
Florida Letter Carriers Won Back Our Sunday Breaks with Direct Action »