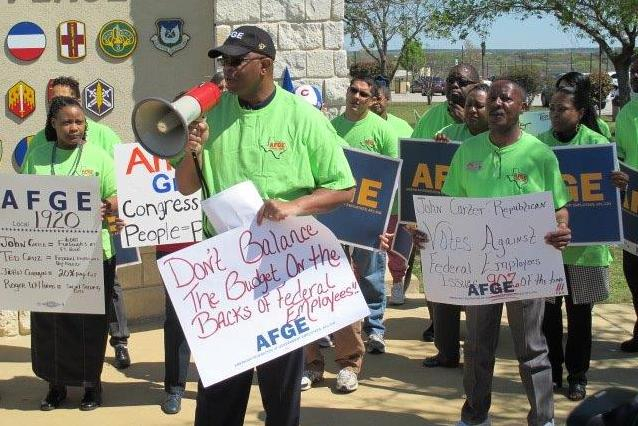 Federal workers at Fort Hood, in Killeen, Texas, in March protested the sequester cuts and the resulting furloughs. The Government Employees union showed how furloughs could be avoided, by pruning back outside contracts, but private contractors have vigorous advocates in Congress. Photo: AFGE.

Update August 6, 2013: The Department of Defense reduced the number of furlough days for 650,000 civilian employees from 11 to six. AFGE President David Cox credited AFGE activists who had flooded the White House and congressional offices with stories of personal hardship and said that Pentagon officials had admitted the furloughs were unnecessary.

“Weekday frequent flyers”—that is, business travelers—must have felt drunk with power in April, when Congress rushed to fix the inconvenience caused by air traffic controller furloughs.

Other federal employees—such as those who work on housing for the poor, or to save the environment—don’t have such powerful constituencies. The government-wide cuts known as “the sequester” took effect March 1, forcing agencies to cut $85 billion from their budgets through September 30.

Among many other cuts, that meant furloughs of five to 11 days’ unpaid time off, depending on the agency. Six hundred fifty thousand civilian Defense Department employees will take a day off every week, beginning in July—a 20 percent pay cut.

“The air traffic controllers crashed quickly, and Congress rushed to fix them,” said Jim Campana, an officer in the Government Employees (AFGE) council that represents Social Security workers. But “other federal employees are on a longer, more prolonged downward flight path,” he said. “We are crashing slowly, with no fixes even being considered.”

Federal employee unions lobbied and bargained against the furloughs. They showed managers how to cut contractors rather than employee hours. They tried to protect the lowest-paid workers, but failed: furloughs will be across the board in each agency.

The politics of immigration caused the Border Patrol to cancel its planned furloughs and overtime ban, said AFGE staffer Jacque Simon. The Federal Bureau of Prisons also found other places to cut, after three guards died in a week, two killed by gangs, the third a suicide distraught over his co-worker’s death.

“The vulnerable agencies are left—those with weaker constituencies,” Simon said.

So workers at the Environmental Protection Agency, DOD, Department of Labor, and Housing and Urban Development (HUD) are still facing furloughs and other cuts.

Workers at HUD will have seven fewer days to do their jobs, a 5 percent pay cut. “HUD helps the poorest 5 percent people in this country,” said AFGE’s HUD Council President Eddie Eitches. “All our programs are being cut: maintenance of public housing projects, subsidies for rental housing, Hurricane Sandy relief, lead-based paint, programs to keep people out of foreclosure, housing for those with AIDS, the homeless program.”

After looking at furloughs, OSHA decided instead to cut training and travel. Travel cuts mean fewer workplace inspections, said Alex Bastani, president of AFGE Local 12. He cited decades of “bipartisan war against OSHA” and the explosion in West, Texas: “We simply don’t have enough inspectors, and this is the result.”

But, he said, “if you only have time to do five out of six of your tasks, if you don’t do inspections, you can’t go back and do them. That’s lost data.

“There will be some backsliding. Some polluters may get away with something. Some pesticide may get into the marketplace that should not have. It starts there.”

You might think the Defense Department would have strong backers—but “its constituency in Congress cares about contractors, not civilian DOD employees,” AFGE’s Simon explained.

Don Hale, who represents those employees, says while his members take a day off every week, the contractor workforce will not be reduced. In fact, the scope of existing contracts is being increased in many cases—in anticipation of the increased workload caused by furloughs.

DOD workers can lose their security clearances, and thus their jobs, if they go into debt, because it supposedly makes them susceptible to corruption.

And when the fiscal year is over September 30? “We don’t think they’ll furlough again,” Hale said. “All signs point to a RIF”—a reduction in force, or layoffs.

At Hale’s location at West Point, one bargaining unit is already 176 positions short, out of 580, because of a DOD-wide hiring freeze. “If there is a RIF,” Hale said, “the only way to maintain would be to use contractors”—which tend to be “a lot more expensive, but they come from a different pot of money.”

Jim McCabe, who works at one of West Point’s power plants, says when one plant lost a transformer recently, a hospital, laundry, and middle school were without services for five days. “They basically had to find the part on eBay,” he said. “That’s how old the equipment is.”

He added that two months ago, West Point dumped 250,000 gallons of raw sewage into the Hudson River because allocated money to upgrade equipment had not arrived.

“Everyone was figuring the other side would blink” and avert the sequester, Hale said. Instead, “now we’re stuck in a crazy part of history.”

Since January, Social Security field offices are open fewer hours. “We close an hour early and are closed all afternoon on Wednesdays,” explained Campana, “but the public who are shut out then come back in force the next day. Thursday is the new Monday.”

He said SSA’s local offices are seeing the same or larger numbers of recipients, in fewer hours, with fewer workers.

SSA is down more than 5,000 employees in the last two years because of a hiring freeze. “Most of our employees, even our very best and most experienced, now have backlogs,” says Campana.

The result? Recipients’ appointments delayed, more employees on stress-related medical leave or retirements, “and those who stay are not sure how long they’ll be able to stand it.”

On top of higher workloads, federal worker pay has been frozen for three years. Next year’s budget includes a 1 percent salary increase—but that is completely offset by requiring employees to pay 1.2 percent more for retirement benefits.

President Obama had proposed the 1.2 percent cut in last year’s budget. AFGE instead negotiated a two-tier, with a 2.3 percent cut only for future hires. But, Simon explained, “Obama came back for a second bite.”

Simon said lawmakers are preparing “well-meaning legislation” that would let federal workers withdraw money penalty-free from their Thrift Savings Plan accounts (the equivalent of a 401k). Sort of like punching you with one fist and offering a very small band-aid with the other.

Chuck Orzehoskie says EPA employees are dedicated to their mission, but “when you hear politicians calling you scumbuckets every day, you start to lose some of your momentum. Congress is talking about more pay cuts next year; people might want to leave and work in the private sector.”

The trend is toward privatization anyway, Simon explained. Furloughs and other cuts create backlogs, “and then Congress has hearings about the backlogs and how inefficient the federal workforce is—and that we have to privatize.”

A version of this article appeared in Labor Notes #411, June 2013. Don't miss an issue, subscribe today.
Jane Slaughter is a former editor of Labor Notes and co-author of Secrets of a Successful Organizer.
Related
Review: How Workers Can Safeguard Pensions »
Open Bargaining Brings the Power of Members to the Table in Berkeley »
Who Holds the Power in Joe Biden’s White House? »
New Jersey Welfare Workers Sound the Alarm on Safety »
New York City Retirees Fight to Defend Their Medicare Benefits »