Ask a union member what’s the bedrock of a union contract, and most will answer “seniority.” Long established as the way to keep the manager’s brother-in-law from getting the good jobs, companies have learned to live with taking turns and following recall lists.

Yesterday Rich Trumka announced a deal with the White House: high-cost union health care plans won’t be subject to an excise tax till 2018—five years later than almost everyone else. Trumka made clear that the intent of the changes the unions brokered is to make so many groups exempt from the tax that in practice it will almost never be applied. But why build a pretzel around the right thing?

Reform Teamster Leaders Out, Then In Again, in Chicago

In 2007 Teamsters in scores of small Chicago shops, and a few big ones, capped years of organizing against corrupt leaders and stolen elections by electing a reform slate to head 11,000-member Local 743. Attendees at the 2008 Labor Notes Conference heard President Richard Berg tell the inspiring story of how persistence had enabled the slate to slash officers’ salaries, get rid of do-nothings, and beef up representation and education.

‘There Are No Tea-baggers in Soup Lines’ 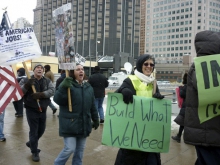 Auto workers outshone the tea-party types as dueling demonstrations took place in the snow outside the Detroit Auto Show today. Small numbers of auto workers gathered to say government should use its role in the auto bailout to direct the factories toward job-creating green products such as high-speed trains and wind turbines—and should enact Medicare for All.

Lean Production Is Alive and Well in Mexico

Chris Kutalik reported here recently that there’s something called the “lean community,” which exists to (1) spread the gospel of lean production and (2) make sure the name of lean is not blasphemed. “It’s not about speedup! Workers love lean production!”

Sometimes high-paid jobs provoke a lot of envy and resentment. But sometimes you feel a lot more comfortable when workers in certain positions are making more than a living wage. While attending the Teamsters for a Democratic Union convention Friday, I met a pilot who took home $26,000 last year as a first officer (that’s the one who sits on the right). And he’s union.

Despite heavy pressure from United Auto Workers officials, Ford workers are voting against concessions this week. The two largest ‘no’ votes came from assembly plants in Kansas City and Walton Hills, Ohio: 92 and 88 percent. 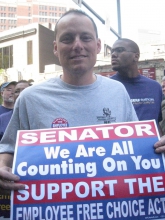 Stewart Acuff, coordinator of the AFL-CIO's Employee Free Choice Act campaign, told Labor Notes that a deal on EFCA has been made: it’s the same three provisions as the original bill except that we’ll get expedited elections—seven days—instead of card check. (The other two are heavier penalties for labor law violations during organizing drives and some form of arbitration of first contracts.)

Asked whether the AFL-CIO would stick to earlier statements that the federation will not support a health care reform bill without a government-insurance “public option,” incoming federation President Rich Trumka ducked this morning.

Unions Are Beginning to Talk About Staving Off a Possible Coup
Your Letters and Parcels Are Piling Up Thanks to the New Privatizer General
Review: Forty Years of Working-Class Films
Trump’s Anti-Worker Labor Board