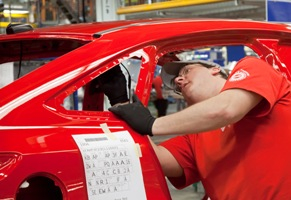 Update: For an analysis of the contract by UAW bargaining committeeperson Gary Walkowicz, click here.

For an analysis of the contract's "lowlights" by the Autoworker Caravan reform group, click here.

The United Auto Workers settled the first of the Detroit 3 contracts Friday night with an agreement that appeared to meet the low expectations union bargainers had worked hard to instill in members.

Although the union has not disclosed details, it appeared that second-tier workers at GM, who make $14-$16 an hour, will go up $2-$3 by 2015. They comprise about 5 percent of the workforce. While welcome, the raises will leave them far behind first-tier workers, whose $28 wage will remain frozen, as it has been since 2005.

A $5,000 signing bonus will sweeten the deal, and the union promised a more “transparent” profit-sharing formula. One GM worker writing on a website for reformers fumed, “We lost that much since the ’09 giveaway.”

UAW President Bob King has said that each Detroit 3 worker has given up a total of $7,000 to $30,000 since 2005. He stated repeatedly over the course of negotiations that he wanted to keep costs for the automakers down, to help them compete with non-union companies.

“I haven’t talked to anybody who says they’ll vote yes,” Waun said. “The main reason is that it doesn’t look like they get anything back at all. And it doesn't sound like there’s any kind of bridge between tier two and tier one—it’s total separation.”

Unlike many unions, the UAW runs no contract campaigns to pressure the companies during bargaining—no buttons, T-shirts, rallies, or even clear demands. Rank and filers and local officials glean snippets from the newspapers, and wait to see what bargainers will bring back. Under the terms of the 2009 government bailouts, neither GM nor Chrysler workers are allowed to strike.

At Ford, the most profitable of the three companies, workers face no such restriction. Yet rather than go to the strongest company first to set the pattern, as was the union’s strategy in pre-concessions days, King bargained first with GM and Chrysler.

Ford workers turned down concessions 3-1 in fall 2009, and workers there are seen as more restive and willing to vote “no” again.

Ford made $6.6 billion in 2010 and GM $4.7 billion. Chrysler saw an operating profit but posted an overall loss of half a billion because of interest on its loans paid to the American and Canadian governments.

The tentative agreement is said to reopen GM’s closed Saturn assembly plant in Spring Hill, Tennessee. Reformers who’d campaigned for “equal pay for equal work”—ending the two-tier system—are watching to see whether those jobs will be at the lower pay.

They note the Saturn plant is one of 14 factories and three warehouses the company has announced for closure since 2009, costing almost 22,000 hourly jobs.

Over the summer reformers sold T-shirts and circulated flyers by the thousands that demanded equal pay and restoration of the cost-of-living allowance. At Detroit’s Labor Day parade, workers held banners demanding “End 2-Tier” and got thumbs-ups from UAW marchers. They will post an analysis of the tentative agreement at autoworkercaravan.org.

Gary Walkowicz, a bargaining committeeperson at Ford, said workers need to look for hidden concessions or loopholes not explained in the union’s “Highlights” handout.

At GM in 2009, for example, a seemingly harmless clause said the parties “will work together...to arrive at innovative ways to staff [small car] operations.” That language was used to justify slashing wages at a Michigan small-car plant, where 40 percent of the workforce was placed on permanent second-tier wages—without a vote.

Local informational meetings will take place next weekend, followed by ratification votes. A UAW talking points memo said, “Once again the UAW has shown that it is completely committed to helping the U.S. auto companies succeed.”

Jane Slaughter is a former editor of Labor Notes and co-author of Secrets of a Successful Organizer.
Related
In a Landslide Victory, Mexican GM Workers Vote In an Independent Union »
Mexican Auto Workers to Choose New Union in Landmark Vote »
Auto Workers Win Direct Democracy in Referendum »
This Year I’m Thankful for the Revolt Against Two-Tier »
'We'll Never Be in This Position Again': Striking Deere Workers Hold Out for Better Deal »