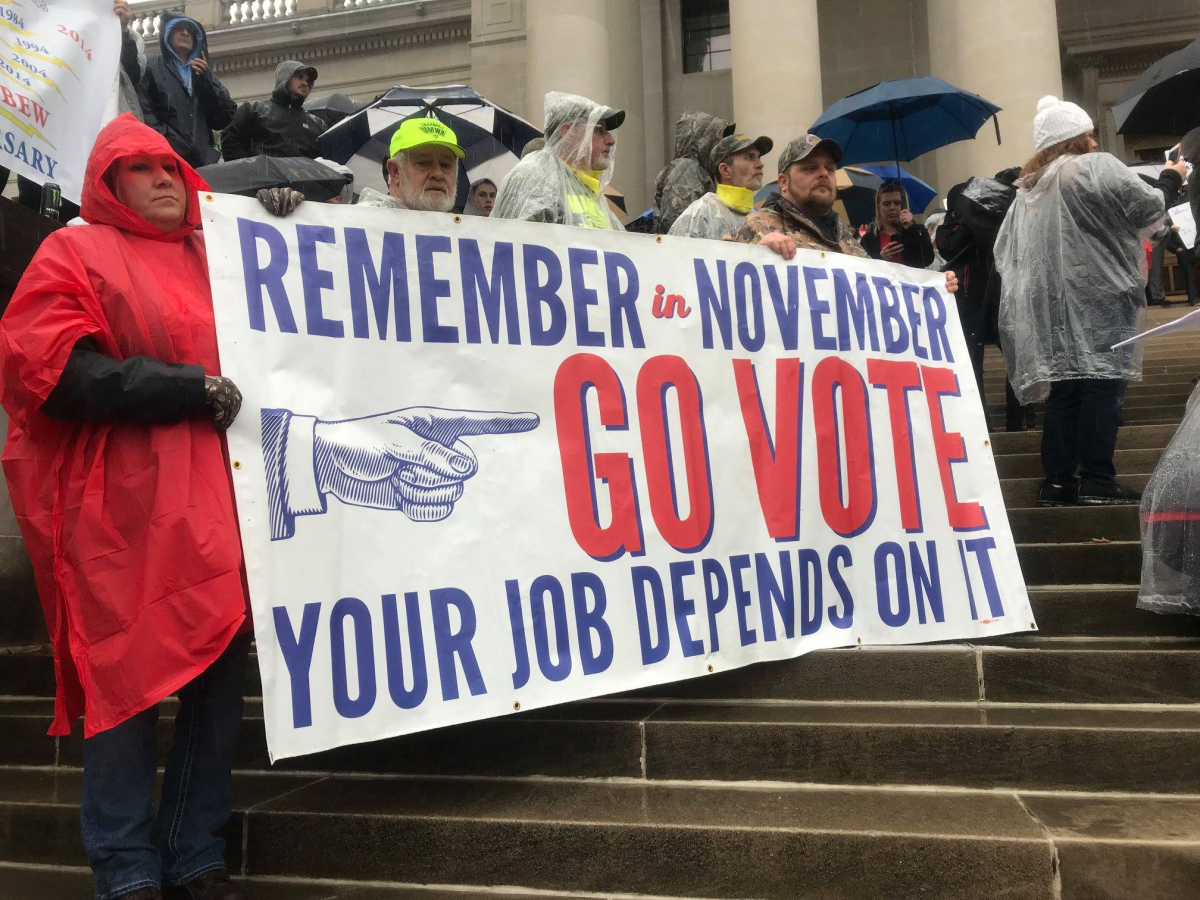 Teachers who took part in this spring’s strike wave vowed for months to “Remember in November” and punish politicians who opposed their efforts. Results were mixed. Photo: AFT-West Virginia

How did states with high-profile union fights fare in the 2018 midterms? The elections were a mixed bag.

Wisconsin union members (and yours truly!) got to vote out the state’s number one union-buster: Scott Walker. He survived a 2012 recall and a 2014 re-election, but the third time was the charm. The governor who rose to the national stage by kneecapping unions was narrowly ousted in a high-turnout election.

“There’s going to be a lot to rebuild,” said Milwaukee Teachers Education Association President Amy Mizialko, whose union campaigned heavily for Walker’s opponent, Governor-Elect Tony Evers. “Lots of things were ripped away from workers and students.”

Evers has vowed to increase funding for public schools by $1.4 billion and to end the voucher program that funnels public money into private schools.

Walker’s notorious Act 10 all but banned collective bargaining for public sector workers, banned dues deduction, and forced unions to recertify every year. Under his lead, the state went “right to work” in both the public and private sectors, and union membership plummeted 40 percent.

Meanwhile Walker diverted taxpayer funds to voucher and charter schools and to electronics manufacturing giant Foxconn, notorious for the awful conditions under which workers produce iPhones at its factory in Shenzhen, China. Foxconn agreed to set up a factory in Wisconsin after receiving the largest tax giveaway in U.S. history.

Michigan has seen the last of Governor Rick Snyder, who signed that state’s right-to-work law in 2012 and established dictatorial control over many Michigan cities and school districts through the “emergency manager” system, throwing out union contracts and corrupting Flint’s water supply along the way. Snyder was term-limited out, but will be replaced by Democrat Gretchen Whitmer. The state retained its Republican-dominated state legislature, though.

In Illinois, unions were pleased to be rid of Governor Bruce Rauner, a named plaintiff in the Supreme Court’s Janus decision and a foe of teachers and public sector pensions. The new Democratic governor, billionaire Hyatt hotel heir Jay Pritzker, will overtake President Donald Trump as the richest elected official in the country.

A NOVEMBER TO REMEMBER?

Teachers who took part in this spring’s strike wave vowed for months to “Remember in November” and punish politicians who opposed their efforts. In Oklahoma, Arizona, and West Virginia, teachers and their unions hoped to turn their state houses less red, with the hopes of winning more funding for education (and in West Virginia, a permanent fix to the state’s public employees health insurance system).

Arizona teachers suffered a setback over the summer when the state’s supreme court knocked their “Invest in Ed” initiative off the ballot. Nevertheless, teachers said their strike made education the top issue in the state’s election. Republican politicians who had opposed the strike scrambled to portray themselves—deceitfully—as supporters of public education.

The state’s voters ultimately rejected a ballot initiative to expand school vouchers, and the statehouse will be less red, if not split, when all the votes are counted. But Arizonans weren’t able to topple key Republican lawmakers, including Governor Doug Ducey.

In Oklahoma, after the strike ended in April, 100 teachers decided to run for office, and 65 of those made it through the primaries. On Tuesday, six K-12 teachers were elected to the state legislature. The legislature’s education caucus, which includes current or former teachers, administrators, and support staff, grew from nine to 25—although many of those, including teachers, are Republicans. Oklahoma also re-elected a Republican governor who had opposed raises for teachers.

North Carolina voters broke the Republican supermajority of their statehouse that for six years pushed through devastating cuts to public education and attacks on workers rights and public services, and sparked the Moral Mondays movement in 2013.

Kentucky teachers had also hoped that a wave would bring educators into the statehouse. Ultimately 14 out of 51 educators (including administrators) won races in the statehouse but Kentuckians only made a small dent in the Republican majority (two seats).

Colorado teachers, after joining the spring wave of walkouts, had gathered signatures to for a ballot measure to raise taxes on the rich and deliver $1.6 billion for public schools. Voters rejected it 55 to 45.

Unions will have to keep organizing to pressure hostile lawmakers to put more money into public education. Will it take another strike wave? Teachers in these states haven’t announced future plans, but with increased member engagement, a lot is possible. “I want to get back to building power,” Arizona teacher Rebecca Garelli said.

Workers and unions have often succeeded on issue fights at the polls. 2018 saw some victories, including votes to increase the minimum wage in Arkansas and Missouri.

But there were also notable losses. A Massachusetts safe staffing initiative was crushed by a well-funded hospital-backed “no” campaign.

Rent control was a key issue for rank-and-file Teamster and Richmond City Council member Jovanka Beckles, who had union and community support in her run for a state legislature spot in Richmond and Berkeley.

Beckles is a longtime activist in the Richmond Progressive Alliance, which has managed to break Chevron’s political domination of that oil-refinery town. But she lost the legislative race to the well-funded candidate of the Democratic establishment, who had the backing of charter school supporters and out-of-state donors.

And ironworker Randy Bryce of Wisconsin, also known as “Iron Stache,” hoped to reclaim Paul Ryan’s seat in Congress with a pro-worker, pro-union message—but he lost to Ryan’s Republican successor.

Samantha Winslow is co-director of Labor Notes.samantha@labornotes.org
Related
We Need Democracy on the Job and in the Union, Too »
2020 in Review: Workers Struggle Under the Weight of the Pandemic »
Auto Workers to Vote on Direct Elections »
How Postal Workers Saved the Election »
Why Did California's Tax the Rich Measure Lose? »