I Work with Mark Janus. Here’s How He Benefits from a Strong Union. 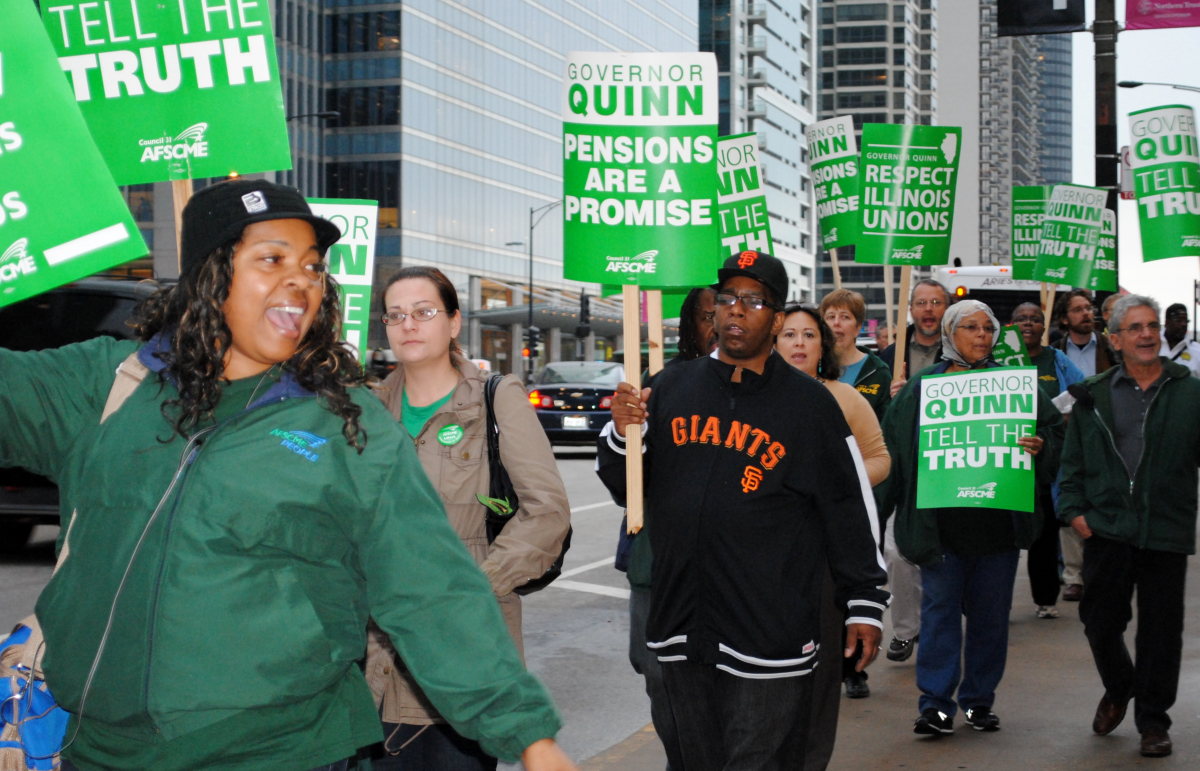 Even the plaintiff in the notorious anti-union lawsuit has benefited from union membership. For instance, he will retire with a pension that his fellow union members have fought tooth and nail to defend against bipartisan attack. Photo: AFSCME

Like everyone else in the labor movement, I’m nervously awaiting the Supreme Court ruling in Janus v. AFSCME Council 31, which would weaken public sector unions by letting workers receive the benefits of representation without contributing toward the cost.

But I’ve got a unique vantage point: I work in the same building as the plaintiff, Mark Janus.

We’re both child support specialists for the state of Illinois, where we do accounting on child support cases. I do this work because it’s fulfilling to help kids and single parents get the resources they need to support themselves.

What convinced Mr. Janus to join this destructive lawsuit? Your guess is as good as mine. I do know it’s much bigger than him. He’s the public face, but this case is backed by a network of billionaires and corporate front groups like the National Right-to-Work Foundation.

But the truth is, even Mark Janus himself benefits from union representation. Here are a few of the ways:

1. Without our union, Mr. Janus’s job would probably have been outsourced by now.

A drastic provision in the state’s “last, best, and final offer” in 2016 would have given Governor Rauner the right to outsource and privatize state employees’ jobs without accountability. Our union is all that’s preventing critical public services from being privatized.

Our agency would be at particular risk, because Illinois already has a longstanding contract with a scandal-ridden, for-profit corporation called Maximus to perform some of our agency’s functions. They modify child support orders and interact with employers about income withholding—pretty simple tasks, yet state employees regularly have to correct their work. If they were to take over more complex tasks, we can imagine how badly that would go! Their concern is for profit, not kids.

If the governor could get away with it, it’s very likely he would expand the Maximus contract to privatize jobs like mine and Mr. Janus’s. He already did something similar to nurses in the prison system. But our union has to be consulted before the state can outsource anything. And when they do outsource, we monitor the contract and discuss how long it will continue. I go to those meetings for our union. Right now, instead of letting management expand its deal with Maximus, we’ve been pressing to cut that contract.

Over his years working for the state, Mr. Janus has earned general wage increases and steps that would not have been guaranteed if not for the union.

3. The public—including the parents and kids Mr. Janus serves—has access to resources like childcare that our union has fought to defend.

Our union allows us speak up together on matters far beyond money. When Governor Rauner tried to cut childcare benefits for low-income single parents, we teamed up with outraged community members and made him back off. And when the budget impasse was forcing domestic violence shelters to close their doors, we kept pushing for years until a veto-proof budget was passed.

4. Our union blocked the employer from doubling the cost of Mr. Janus’s health benefits.

In negotiations the state has pushed to double our health insurance costs and drastically reduce coverage. The employer declared impasse and walked away from the bargaining table. AFSCME took the matter to the Labor Relations Board and the courts—securing a temporary restraining order that prevents the governor from imposing his extreme demands.

5. We make sure Mr. Janus’s office is warm in the winter and cool in the summer.

As a union we deal with health safety issues large and small. In the department that rescues children from household abuse and neglect, we’re continually pushing for sufficient staffing. The stakes are high: one member was killed on the job after she went out on an urgent call alone.

Other matters are less dramatic. In state office buildings we solve problems like flooding, mold, leaky windows, and toxic pigeon feces. One building had someone creeping up on employees in the parking lot, so we worked with management to get better lighting and security patrols.

In the building where Mr. Janus and I work, the heating and cooling system is extremely old. Twice a year they bring in a computer from 1982 to switch from heat to air conditioning for the summer, and vice versa for the winter. So when the weather fluctuates, we work to get portable heating or cooling units deployed where they’re needed.

Many of these are ongoing issues, where our union acts as a watchdog. We have a health and safety chair on the union executive board. Any time a problem comes up, he starts by approaching management to resolve it. If that doesn’t work, he can file an OSHA complaint plus a high-level grievance.

6. Thanks to our union, Mr. Janus will retire with a pension.

Our union has fought to save the defined-pension that Mr. Janus will receive upon retirement. A coalition of unions including AFSCME took the issue to court—and won. The Illinois Supreme Court ruled that employees’ pension benefits cannot be cut.

7. Mr. Janus can get sick and still have a job when he comes back.

Before this job I worked without a union, in the retail industry, where I experienced what it means to be an at-will employee. Three absences would cost an employee their job—even if they called in sick and provided a doctor’s note.

8. Our union ensured that Mr. Janus could be fairly hired, regardless of his politics.

In public service our ultimate bosses are elected officials. There was a time in Illinois when to be hired or promoted, you were expected to make a contribution to the political party in power. But a 1990 Supreme Court case called Rutan v. Republican Party of Illinois put an end to that. Today our union enforces a triple-blind system for fair treatment in hiring and promotions, making sure seniority is followed. It’s one more way that even Mr. Janus benefits from having a union on the job.

Donnie Killen is a child support specialist for the state of Illinois and vice president/executive steward of AFSCME Local 2600.

A version of this article appeared in Labor Notes #470. Don't miss an issue, subscribe today.
Related
Janus for the Rails and Air? »
Why Missouri 'Right to Work' Went Down in Flames »
Viewpoint: Unions Aren’t Exclusive Clubs—We Fight for All Workers »
Missouri Voters Overwhelmingly Reject ‘Right to Work’ »
Viewpoint: How to Talk with Nonunion Workers about ‘Right to Work’ »