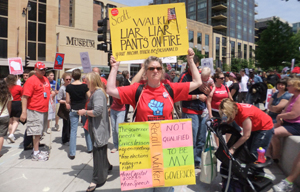 Unfazed by the rebellion that has shaken their state since February, Republican legislators in Wisconsin seem determined to push through every aspect of the right-wing agenda they can lay a pen to.

The state Assembly called an “extraordinary session” yesterday—which would allow legislators to limit debate and amendments—in order to pass an onerous budget. Unions and supporters brought 5,000 protesters inside and outside the Capitol.

Governor Scott Walker’s original “budget repair” bill, which kicked off the rebellion in February and which would virtually end collective bargaining rights for public employees, had been thrown out earlier by a county judge. She ruled the Senate had pushed it through without proper public notice.

So the Republican speaker of the Assembly gave the state Supreme Court a June 14 deadline: either overturn the lower court and make the bill law, or we’ll add the anti-collective-bargaining provisions into the budget bill.

The Supreme Court’s 4-3 Republican majority complied. “This ruling is just one more indication that Wisconsin Republicans do not believe in a functioning, sound democracy inclusive of checks and balances,” said Wisconsin AFL-CIO President Phil Neuenfeldt.

The court’s ruling clears the way for the bill to become law, including its 8 to 10 percent pay cuts for many workers. Legislators were trying to figure out how to exempt transit workers, however. They learned that messing with transit workers’ collective bargaining rights would disqualify Wisconsin from receiving millions in federal aid to transit.

That effort could be further complicated by a federal discrimination lawsuit Wisconsin unions filed today. They charge that when Walker took away bargaining rights from all public employees except police and firefighters, he was discriminating against one class of workers. They noted that police and firefighters unions had backed Walker in his 2010 election and called their exemption from the law “political payback.”

Ironically, the firefighters have been among the most outspoken and militant of the unions resisting Walker’s moves, and many police unionists have been active off-duty as well, sporting signs that say “Cops for Labor.” Kevin Sherry, vice president of the Madison firefighters local, said when he first learned his union would be exempt, he felt “sick to my stomach.”

In announcing the suit, officials made it clear they were challenging only Walker's attack on their right to bargain, and not his salary cuts to pay for workers' health insurance and pensions. "Public sector unions have made it clear from day one that Wisconsin workers would do their part to share in the sacrifice and keep our state moving forward," the AFL-CIO said.

Union leaders’ main plan, though, is to press ahead with the recall votes on Republican senators that will take place in July and August. Campaigners have gathered enough signatures to force votes in six districts, while Republicans are attempting to unseat three Democrats.

Walker’s foes need three more Democrats in the state senate to win back a majority.

The June 14 rally was the latest in an ongoing wave of creative actions by unions, students, housing rights activists, immigrants, farmers, and others that have not ceased since the heady days of February and March. While not nearing the size of earlier crowds, these actions have often disrupted legislative goings-on and risked arrest.

Protesters began a tent city June 4 near the Capitol in Madison that continued at press time, sleeping out overnight and holding nightly rallies. “Walkerville,” backed by the state AFL-CIO and its We Are Wisconsin coalition, survived a tornado that passed a few miles south of Capitol Square.

A more militant faction, led by the Firefighters, planned to block entrances to the square with their vehicles June 6. A thousand demonstrators turned out. Police had said they’d cooperate with an afternoon-long protest but reneged, quickly breaking up the blockade before it began.

Demonstrators did manage to shut down M&I Bank, a Walker contributor.

Earlier, protesters disrupted a meeting of the legislature’s finance committee as lawmakers debated funding cuts. Dozens packed the hallway and sang “We Shall Not Be Moved.”

“They would stand up one at a time and when one got hauled off by the police, another one would stand up,” reported building trades official Eric Cobb. “It was students and elderly and other people; it lasted for hours and hours.”

Cobb said protesters aimed at both Republicans and Democrats, because Democrats counseled quiet. “You could be doing more harm than good,” one warned.

Students dripping fake blood staged a zombie die-in at the Capitol to protest the “death” of higher education and the right to vote. Security guards kept them away from Walker’s office.

When Walker and anti-Medicare Congressman Paul Ryan addressed a June 9 conference sponsored by bankers and realtors—big campaign contributors—union, farmer, and housing rights activists pounded on the locked doors outside, disrupting the gathering with their drums, chants, and horns.

Inside, activists dropped a banner reading "Housing for the needy, not for the greedy” before police closed in. “Farmers are being foreclosed on left and right,” said John Peck of Family Farm Defenders. “This is a corporate land grab by the banks who are in cahoots with politicians.”

A BUDGET REAGAN WOULD HAVE LOVED

Proclaiming February 6 Ronald Reagan Day was perhaps the least noxious of the items Wisconsin Republicans inserted into their proposed budget.

The budget would cut state aid to K-12 schools, technical colleges, cities, and counties—and prevent localities from raising property taxes to make up the shortfall.

The Wisconsin Grocers Association, which had asked for the change in child labor laws, said members were “ecstatic.”

The state has already passed a bill requiring voters to show photo ID, a move designed to suppress the vote among people who don’t have IDs—minorities and students, who trend Democratic.

It remained unclear whether state employees, blamed by Republicans for the state’s fiscal problems, would get Ronald Reagan Day as a paid holiday.

Though the state AFL-CIO and the statewide teachers union, WEAC, mobilized for the rally against the extraordinary session, most union leaders are dedicating their efforts to the recalls.

The Democratic Party has chosen its candidates for the recalls (only one of whom is a labor leader), but each will face a nuisance challenger in a Democratic primary. The Republican Party is running some of its own stalwarts as Democrats in order to force primaries and give the six incumbents more time to prepare for the actual election.

Electrical Workers Local 2304 President Dave Poklinkoski noted the good spirits in Walkerville but said, “I don’t know if people have a coherent plan. It evolves as it goes along. Some are trying to organize direct action, but is it part of a coherent strategy?”
One ingredient missing has been an effort to fortify the unions that may soon lose both contracts and dues check-off. The AFL-CIO Organizing Institute will put on a weekend training in June, and Poklinkoski is working with a group of local leaders who will also offer training on setting up member-to-member communication and mobilization networks.

“Our biggest problem in February and March,” said Poklinkoski, “was the lack of internal ability of unions to mobilize to do more. So we are working to fix that, through a series of Solidarity Schools.”

A version of this article appeared in Labor Notes #388, July 2011. Don't miss an issue, subscribe today.
Related
Richmond Educators Are First In Virginia to Win Bargaining Rights »
Open Bargaining Brings the Power of Members to the Table in Berkeley »
New Jersey Welfare Workers Sound the Alarm on Safety »
New York City Retirees Fight to Defend Their Medicare Benefits »
How We Turned Bargaining Around at Law360 »