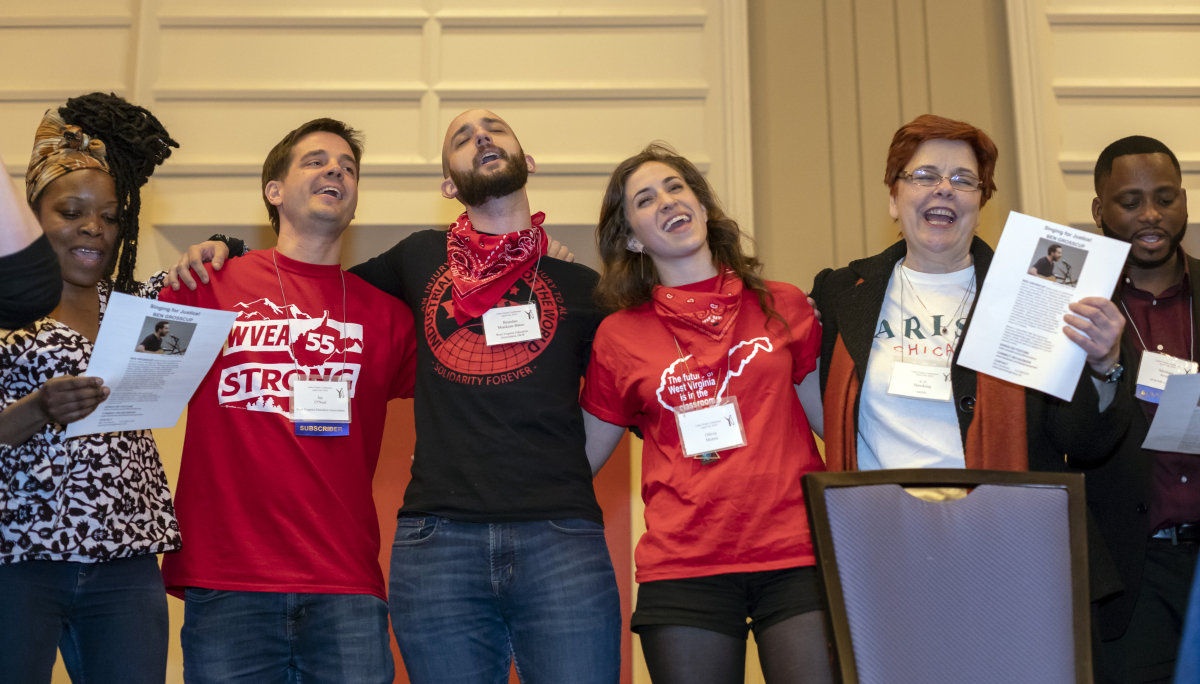 Credit: Jim West, jimwestphoto.com. Click the link below to view more photos from the Conference.

Labor Notes handed out five Troublemaker Awards to those who have carried the banner of a fighting, bottom-up labor movement.

Middle school teacher Jay O’Neal became a Labor Notes subscriber last May, just as the school year was wrapping up in Charleston, West Virginia. He liked what he was reading, so in the fall he booked his trip to Chicago for the Labor Notes Conference, conveniently scheduled during his spring break.

Little did he know that he and his fellow teachers would end up the stars of the show, inspiring 3,000 attendees with the story of their nine-day statewide strike.

“Poor, looked down upon, beat down, disengaged, disorganized, and forgotten, West Virginians awoke and took a stand,” said Nicole McCormick, a music teacher from the tiny town of Athens, West Virginia, population 1,000, at Friday night’s opening plenary. Her takeaway: “If we can do it, anyone can.”

Conference-goers soaked up these doses of hope, and took home plenty of tips, too. “The first and most important lesson,” McCormick said, “is for everyone to realize that our labor is ours first. It is up to us to give our labor, or to withhold it.”

This year’s conference gathered union and worker center activists from 47 states and 26 countries for three days of workshops and meetings, a testament to the growing troublemaking wing of the labor movement.

Looming over the conference was the Janus v. AFSCME case, with a decision expected by the end of June. Hundreds of local unions face the prospect of being gutted financially and organizationally overnight. Many came looking for strategies to beat this corporate-backed judicial assault.

“The unions that build power in open-shop America,” said Alexandra Bradbury, co-director of Labor Notes, “will be the ones that fight hard on workplace issues their members care about, and where large numbers of rank-and-file members take on their own fights.”

Dozens of workshops focused on these types of workplace fights, from teachers beating back bullying principals, to fights around health care staffing, to organizing against sexual harassment on the job. Members flocked to nuts-and-bolts workshops, to learn how to beat apathy, supercharge grievances, and organize a march on the boss.

Among the best attended were ones based on our best-selling book Secrets of a Successful Organizer. Once again, our biggest issue was finding enough space to fit everyone.

Too many unions are unable or unwilling to fight back—so as always, a focus of the Labor Notes Conference was the struggle to transform them. Teamster reformers were there; after nearly taking the presidency from James Hoffa two years ago, they’re now pushing the union to make a stand at UPS on forced overtime, surveillance, and poverty wages for part-timers. The Teamsters agreement at UPS, the largest single private-sector union contract, expires July 31.

A challenge to our readers: Let's have representatives from all 50 states next time—tell labor activists in Hawaii, Montana, and South Dakota we need them to join us in 2020!

Several workshops and speakers addressed the #MeToo movement. CJ Hawking told how ARISE, a Chicago worker center, is fighting the case of Teresa Acevedo and Balbina Ortiz, a mother and daughter fired and disciplined for speaking up about sexual harassment from a supervisor at a local pizza chain. And before the conference officially started, participants packed a bus for a Women’s Labor History Tour, which visited the cemetery where labor activists Elizabeth Gurley Flynn, Emma Goldman, and Lucy Parsons are buried.

A couple weeks after the last Labor Notes Conference, in 2016, 38,000 Verizon workers launched their 49-day strike. That strike showed, as Communications Workers Local 1101 Vice President Al Russo put it in this year’s opening plenary, “that we could take on Verizon—a big corporate bully with a ton of money—and we could win.”

This time, it’s Arizona and Colorado teachers who are taking the baton, with walkouts happening as we go to press.

Grocery worker Auriana Fabricatore put her new skills to work right away. “Since getting back, much to the displeasure of my management, I’ve sent six information requests,” she said. Before Labor Notes, “I didn’t even know that was a thing.” She also led co-workers in a march on the boss that got a manager to rip up unfair write-ups on the spot.

A big group of Milwaukee teachers returned home to take on their school board bosses, who are proposing draconian benefit cuts. Milwaukee’s school board director told union Vice President Amy Mizialko—who spoke at our Saturday morning plenary—to “go to hell.” Mizialko shot back: “The members of this union will go to hell and back for our students.” Hundreds of teachers, students, and community members picketed outside the next board meeting.

At Labor Notes, “I feel a solidarity I have never experienced before,” said first-time attendee Ginger Lane of Communications Workers Local 7019 in Phoenix, Arizona. “I felt the power of all of us, every union, coming together.”

We’re glad to have provided a space for so many top-notch troublemakers to rub shoulders and swap stories. We hope to see even more in 2020.

Jonah Furman is a staff writer and organizer for Labor Notes.jonah@labornotes.org
Related
Can't Wait Until the Next Labor Notes Conference? »
Labor Notes News: So Many Workshops! »
Labor Notes: Forty Years of Troublemaking »
Welcome, Saurav and Joe! »
Welcome, Bianca and Barbara! »