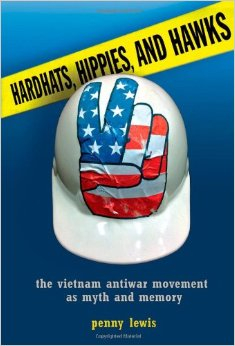 Lazy journalists and pundits repeated the story over and over, and made it stand in for every sentiment, every action of a working-class person about the Vietnam War: In May 1970, construction workers chanting “love it or leave it” attacked antiwar protesters on Wall Street. (Seldom mentioned is the fact that hundreds of Wall Street types joined in, too.)

In the two weeks that followed, workers marched daily at lunchtime, climaxing with an “Honor America, Honor the Flag” rally organized by the Building Trades Council. Liberal Mayor John Lindsay was a prime target. The New York Times reported that many demonstrators said they were fed up with the peace movement.

We can thank Penny Lewis, who teaches labor studies in New York, for showing us that this well-cultivated image of the hardhat hawk is only one part of the story of working-class opinion and activity about Vietnam.

In Hardhats, Hippies, and Hawks: The Vietnam Antiwar Movement as Myth and Memory, she asks, “Who opposed the war? Who took part in actions either directly or indirectly against the war? Who caused the greatest disruption to the US capacity to fight in Vietnam?” and makes the case that “working people were at the forefront.”

The history that’s come down to us is that the antiwar movement (of which I was a part) was populated by privileged, upper-middle-class people. The working class, on the other hand, supposedly backed the war, despised the protesters, and was pretty much Archie Bunker.

But the fact is that working-class people were more likely to oppose the war.

A Gallup poll in January 1971 asked whether people favored bringing all the troops home before the end of the year. Omitting the “don't knows,” 73 percent overall said yes.

For those with just a grade-school education, the proportion was higher: 80 percent. High school: 75 percent. Those with a college education dragged down the average: only 60 percent wanted the troops brought home.

Perceptions, though, are still thoroughly skewed the other way. Lewis reports that sociologist James Loewen surveyed undergraduates and non-students over a decade. When he asked them to estimate how opinions on Vietnam broke down, respondents got it completely backwards: they thought that 90 percent of the college-educated had opposed the war, 75 percent of the high-school-educated, and 60 percent of the grade-school graduates.

Penny Lewis reports opinions on the war as they were measured at the time:

Lewis details the many ways the stereotype has been reinforced over the years, from Archie Bunker himself, portrayed as a lovable bigot, to a 2004 “Law and Order” episode. On the show, a postal worker whose son was killed in Afghanistan murders a young, wealthy, and self-righteous antiwar activist. When the jury deadlocks, the prosecutor says it included “too many blue-collar people.”

The stereotyping goes both ways. I can't recall ever seeing a sympathetic depiction of a hippie on TV or in a movie. Think of the movie “Forrest Gump,” with its nasty long-haired radical. This is the companion of the lazy pigeonholing of the hardhat hawk.

Lewis is right to ask who it serves, our continuing memory of the Vietnam era as one of unbridgeable cultural and political gaps. One reason the mistaken history persists, she says, is that it has “served all war-supporting political elites... A memory of a fractured, class-divided populace at war with itself distracts us from... the widespread abhorrence of the war that existed across classes.” (See box.)

(Thank God that the sentiment against going back to Iraq is wide and deep enough to restrain President Obama’s hand, at least for now. Seventy-seven percent oppose sending ground troops, and 75 percent say the earlier war with Iraq was not worth the loss of American lives and other costs. Sadly, 51 percent favor “military advisers” and 56 percent are OK with drones.)

Lewis reminds us, though, that sentiment and action are two different things. By and large, working-class people did not join organizations of the sort we identify as part of the Vietnam antiwar movement.

For an individual to take action about a political opinion requires (1) that the issue seem unjust and traceable to a source, (2) that there is a realistic plan for addressing it, and (3) that he or she can connect to other people who are taking action.

Antiwar activism on Vietnam started, in the mid-1960s, among groups with a middle-class membership. These were relatively small groups, such as SANE and the Women’s International League for Peace and Freedom, that had agitated against nuclear war during the 1950s. Teach-ins in early 1965 brought the issue to the campuses.

But those who undermined the war were not just those who petitioned, sat in, or marched. One of Lewis’s greatest strengths is to detail the many other ways that working-class people resisted the war or let their feelings be known.

She tells us about draft avoidance, desertion in the armed services (which were 80 percent working-class), fragging (killing officers who ordered dangerous missions), and the GI coffeehouse movement, where soldiers could come to escape army life.

Black soldiers in particular were so “unreliable” in Vietnam that they were pulled out of the front-line fighting. In 1970 a meeting of 1,000 mostly black soldiers in Heidelberg, Germany, demanded equal promotions, college prep classes, a committee of enlisted men that could block sending a soldier to the stockade, and immediate withdrawal of U.S. forces from Southeast Asia—and Africa.

Conditions in the army were so “mutinous,” Lewis reports, that it became “impossible for the brass to fight the kind of war they wanted to fight.” Dozens of mutinies went unpunished; some companies refused to invade Cambodia and Laos. Historian and Vietnam veteran Terry Anderson says that toward the end officers were locking up the guns so the grunts could not turn them on their superiors.

At home, black and Chicano civil rights organizations were strongly antiwar, too—but their antiwar work tended to be less visible, because it was entwined with their work on other issues.

Perhaps the most important working-class antiwar organization was Vietnam Veterans Against the War. (Lewis mentions the VVAW commune in Washington, D.C., that I hung out at in the early 1970s, and quotes a policeman/vet who infiltrated it. I remember John O’Connor sprucing up to, supposedly, go see his girlfriend Velma; it came out later that those incidents of combed hair and neat shirts were his visits to police HQ.) VVAW enjoyed huge legitimacy because its members could expose the atrocities they had seen or committed.

But what of the premier working-class organization, the unions? As usual, it depends whether we’re talking about leaders or members.

AFL-CIO President George Meany and many other Cold Warriors were strictly pro-Johnson—he was a Democrat, after all—and remained pro-war after Richard Nixon was elected, with his claim to have a “peace plan,” in 1968. But in January of that year, union members were evenly split on whether the war was “a mistake.” In May 1970, 53 percent of union members disapproved of the hardhat riot in New York; only 30 percent approved.

When antiwar groups formed within the labor movement, they began with the “usual suspects”: leaders of the United Electrical Workers and the 1199 health care union. Others joined later, forming the Labor Leadership Assembly for Peace in 1967 and calling for negotiations between North Vietnam and the U.S.

Lewis notes that LLAP participants signed statements, took out ads, and held conferences—but did not, by and large, try to mobilize their members to oppose the war.

Why not? Well, as Lewis says drily, “Few unions had a regular practice of working with union members in nonelectoral political arenas.” And what if your members were more hawkish than their leaders? And what if opening up a discussion within the union would embolden rank and filers to question leaders on other issues?

The early 1970s was a time of rank-and-file restiveness. Opposition caucuses formed in several big unions. Antiwar union leaders apparently found it safer to follow familiar channels and not try to stir up the ranks.

One of the many insights I took away from Hardhats, Hippies, and Hawks was the need for movements to make themselves habitable for all sorts of people.

No matter how strongly people feel about an issue, they’re unlikely to join a group they don’t feel comfortable in. I once read an article counseling environmentalists on how to reach out. “At your potluck, don’t serve dinner in recycled cottage cheese containers” was one piece of advice.

The middle-class radicals who led the antiwar movement in its early years recruited the “low-hanging fruit,” as Lewis puts it. They went after those most like themselves, and spent little time trying to reach blue-collar or union workers.

Occupy, as another example, championed the 99%—but in some cities, those who were willing to camp out in a public place put themselves above those who weren’t into that. A movement that seeks to represent a majority needs to learn how to incorporate that majority.

Still, Occupy touched a nerve across the non-elite spectrum, making sense to at least the 70%, if not the 99%. Who would have predicted that a movement so culturally at odds with usual working-class methods of political action would gain so much support, from both rank-and-file activists and union leaders?

Those who believed the false history of the Vietnam antiwar movement would have found it impossible to imagine New York transit workers, in 2011, applauding the kids in Zuccotti Park. But Lewis has shown us that the antiwar movement was multifaceted—and that workers will join the radically questioning movements of this century, too.

Jane Slaughter is a former editor of Labor Notes and co-author of Secrets of a Successful Organizer.
Related
After Strike, Washington Carpenters Approve New Contract by Slim Margin »
After Voting Down Four Tentative Agreements, Washington Carpenters Strike »
Review: White Workers Who Buy into Racism Are Shooting Themselves (and Everyone Else) in the Foot »
Review: Blood Runs Coal Tells the Notorious Assassination of a Mine Workers Union Reformer »
The Australian Green Bans: When Construction Workers Went on Strike for the Environment »