Strikers Get Jobs Back at Law-Breaking Nursing Home Chain 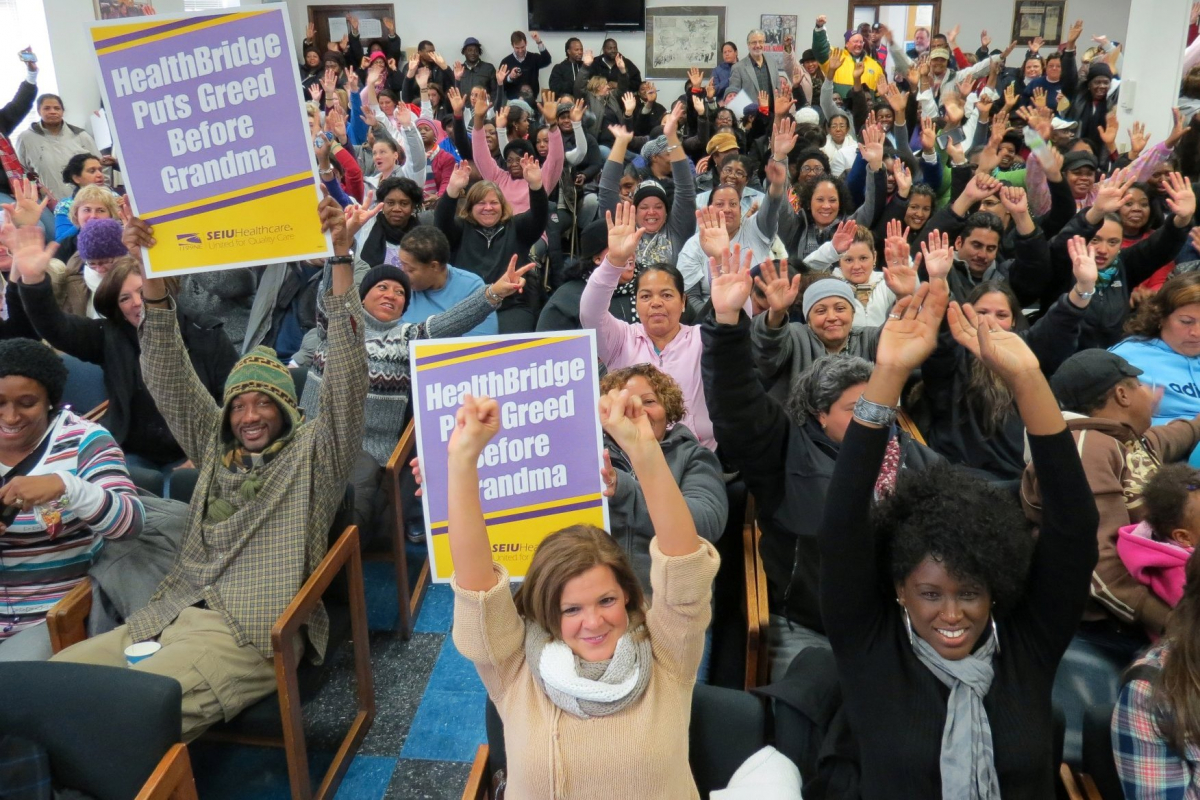 HealthBridge workers in Connecticut began an eight-month strike last summer after the nursing home chain imposed draconian cuts. They will return to their old jobs—and contract terms—March 3, thanks to a rare Labor Board injunction. Photo: SEIU 1199 New England.

Connecticut nursing home workers who struck against severe takeaways last July are returning to work with a rare victory: a Labor Board injunction has forced their employer to restore their old jobs and contract terms.

“This is a fairly extraordinary event, given how tilted labor law is in this country and how little enforcement power it has,” said SEIU 1199 New England’s Deborah Chernoff. “It’s a testament to the egregious nature of what HealthBridge did.”

Some 600 HealthBridge workers in Connecticut will return to work March 3, ending an eight-month strike and lockout against the ferociously anti-union chain of nursing homes.

From the start of bargaining two years ago, company negotiators were blunt about their goal: to drive standards in HealthBridge’s five unionized Connecticut nursing homes down to the level of its three non-union homes.

That meant eliminating staff-to-patient ratios, reducing wages to $9 an hour (a $5 cut), slashing sick days in half, forcing workers to pay most of their own health care costs, replacing their pension with a 401(k), and cutting the work week to 37.5 hours by eliminating paid lunches. The company proposed big takeaways from every clause in the contract—except “management rights.”

Twenty-year dietary worker Gary Davis said that, under the new proposal, health care to cover his family would consume three-fourths of his paycheck.

While HealthBridge stonewalled in bargaining, even locking workers out of one nursing home for three long winter months, its CEO, Daniel Straus—apparently irony-challenged—was pouring $1.25 million a year into a vanity project, the “Institute for the Advanced Study of Law and Justice” at New York University.

But after HealthBridge unilaterally imposed its extreme contract, workers struck last July to refuse the cuts. When they offered to go back to work, HealthBridge refused to reinstate them.

“They want to take back everything,” striker Barbara McFadden, a 10-year certified nursing assistant, told Labor Notes at the time. “We had no choice; they made us go on strike.”

A series of federal complaints and National Labor Relations Board rulings found HealthBridge was violating labor law over and over. In August, the Labor Board issued another complaint, charging the company had illegally failed to bargain in good faith, imposed the one-sided contract, and refused to reinstate the strikers. You might expect this action would force the company to promptly welcome workers back under the old contract.

But HealthBridge continued to appeal the rulings. It can take years for a company to exhaust all avenues of appeal, and in a high-turnover, low-wage industry, delaying is itself a strategy. Workers generally can’t afford to wait through years of legal machinations; they have to find other jobs and move on with their lives. The boss may ultimately lose a court case, but still win a union battle by attrition.

So in September the Labor Board sought a rare remedy called the 10(j) injunction, meant to put workers back to work right away while the appeals wound their way through the courts.

HealthBridge, of course, appealed the injunction itself, all the way to the Supreme Court, which gave the company a final no in February.

It worked. Six months after the Labor Board filed for the injunction, the 600 workers (all but a handful who have moved on) will return to their original jobs and shift schedules March 3, with all the terms of their previous contract restored—including wage rates, staffing ratios, pension and health care, lunch time and sick days. (No back wages, though—that will have to wait the months or years it takes for the regular appeals process to play out.)

While the old terms will be back in effect for the interim, the two sides will return to the bargaining table and resume contract negotiations.

Believe it or not, this is the speedy version of labor justice. Compare it to the story of the workers at a New Jersey nursing home owned by closely-related company CareOne, also owned by Straus. They voted to unionize in 2010, but still don’t have a contract, and nine were fired in retaliation shortly after the vote. The NLRB finally ruled last September, two years after the fact, that CareOne must reinstate and repay them. But the company hasn’t done this. It is still appealing the decision, and by now some of the workers have had to find other jobs.

While the strikers in Connecticut are happy to be back to work, Chernoff said they don’t expect this to be the end of the battle with HealthBridge. The union will be closely monitoring the process to make sure the boss really gets people back to work on their former schedules, as promised—and gets back to the bargaining table.

The company had threatened to close all its union facilities in Connecticut if it could not get its way in negotiations. “It would not be at all surprising if that were the next salvo in this particular war,” Chernoff said.