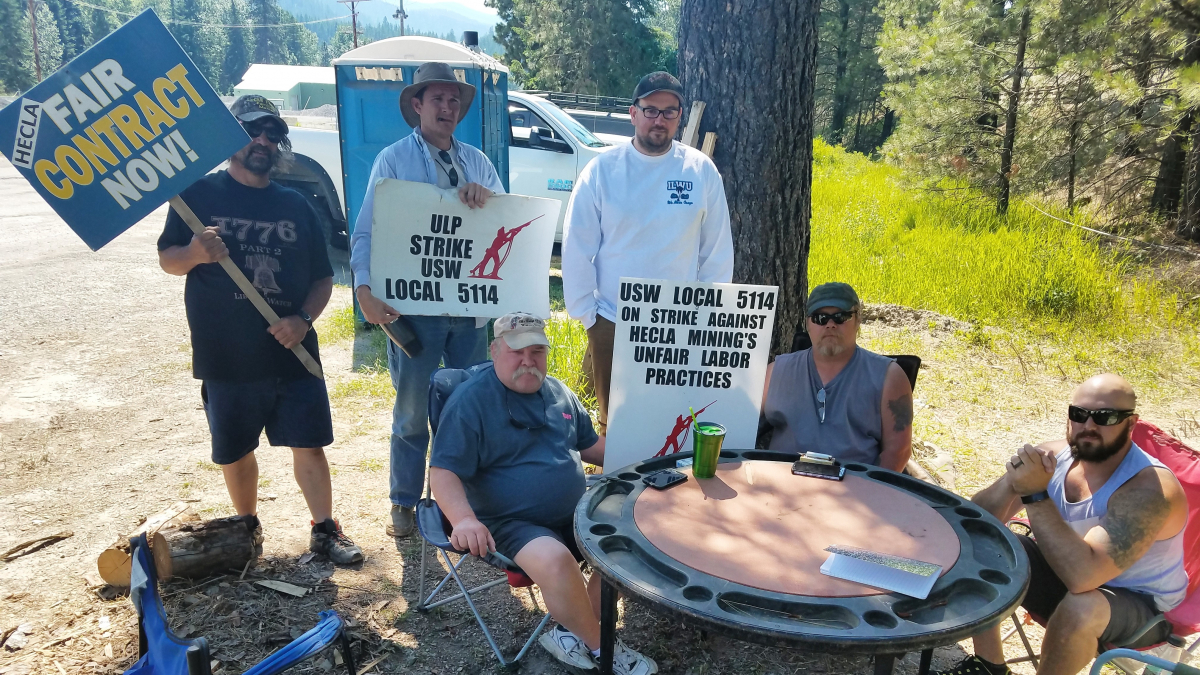 Miners at the Lucky Friday mine in Northern Idaho have been on strike since March 13 over company attacks on seniority. Photo: Brian Skiffington

A beloved 53-year old miner named Larry Marek was killed on the job at the Lucky Friday mine in Mullan, Idaho just a few years back. Steelworkers Local 5114 had been warning the company about the stability of a certain area called a stope. Management had Marek mine out the last piece of earth supporting the cavern for the ore it contained and the roof collapsed.

The consensus is that company greed for profit killed Larry Marek when the ceiling caved in. Now his picture stands on the 24-hour picket line in front of the mine, as 250 miners enter their fifth month on strike.

Rick Norman, known as “Redman,” is one of the striking silver miners in the Silver Valley, a stretch of small but proud mining towns along I-90 in the northern Idaho panhandle. He says the terms that Hecla Mining imposed on workers in March radically changes almost every aspect of their daily lives. The company wants to:

“The bid system is everything,” Redman tells me. “It’s about control.” Workers speculate that the company wants to control job assignments so that they can make old-timers do the backbreaking labor they did 30 years prior, pressuring them to quit and leave the industry. At stake are years of experience, trust, safety, and opportunities for younger workers to learn the job from senior members.

Trust is critical six thousand feet beneath the earth's surface, in confined spaces with rock temperatures near 110 degrees and with unpredictable movements of the earth. “It’s about the right to work with guys that have the training and know the safety,” Redman says.

Idaho is a right-to-work state, so a key component of organizing new workers into the union is convincing them that they have to join if a senior member is going to pick them through the bid system. Ninety-six percent of the bargaining unit is in the union.

The hard-rock mining industry is fickle. Downturns in markets, catastrophes, environmental protections, and many other factors can open and close mines at the drop of a dime. A three-year call-back is critical for any sort of stability for a mining family.

Redman and his fellow strikers paint a picture of a company that used to care about workers and their community. Upper management knew everyone by name and would sit down with you if you were having a problem. “Their office was in Wallace [a 10-minute drive from the mine] and any miner could walk right in and shake their hand,” Redman says. “Sure, there were problems, but we knew we needed each other.”

Several strikers said Hecla used to give workers interest-free home loans. Now, miners say the company seems willing to sacrifice its workforce, the community, and anyone that gets in its way to appease shareholders and generate profit. This strike, the first since 1981, only scratches the surface of the disbelief and frustration this union feels.

Local 5114 has been without a contract since March 2016. When Hecla began implementing its “last, best, and final” offer in March 2017, the union declared an unfair labor practice strike.

Miners contend that management never intended to negotiate at all, and was just buying time while outside contractors finished a critical project. Some speculate that the company intended to force a strike all along. Under labor law, the company cannot permanently replace unfair labor practice strikers. Hecla has not attempted to bring in strikebreakers, though some maintenance and contracting work has continued in the mine and the mill. Rumors abound that management could begin blasting at a slow pace.

NEVER GO BACK FOR LESS

“Most guys retire and are lucky to live 10 years,” says Kevin Richardson, who works as a “toplander,” controlling the flow of cargo from the surface down the mine shaft. He used to work at the Galena mine nearby and says that only one of the guys from his old crew is still alive today.

Just working in the industry almost guarantees health problems later in life. Workers are exposed to volatile chemicals used in sprays to keep down dust, prevent fires, or seal tunnels. The danger of “rock blasts” is ever present. The earth creaks and groans under the stress a mile below the surface and violent, pressurized bursts of air can collapse tunnels in an instant. These bursts of energy can shake homes off their foundations miles away.

“It’s the smoke that kills you underground. It’s not the fire. It’s what you don’t see,” says Rock Sandau, a cager, who controls the flow of cargo at the bottom of the mine shaft.

Every worker I talked to, young or old, has been affected by the loss of a co-worker. The old-timers can remember working at the nearby Sunshine mine in the early ’70s when an underground fire killed 91 miners. They can remember pulling their fellow workers’ bodies out of the ground, people they had grown up with their whole lives.

Men in their fifties can remember the school principal coming into their classrooms and pulling kids out of class. Everyone knew that meant someone else's father had been found.

“It’s personal, so much that it’s hard to talk about or read about,” says Redman. “I’ve had to dig out bodies. The company guys just freeze and panic. They shut down and don’t know what to do. They want control and to be in charge, but when it’s time to make critical decisions in the moment, they just freeze.”

“I know guys with 30 to 40 years down here, who would never go back to Lucky Friday for anything less,” says Richardson.

'WE SUPPORT OUR MINERS'

Everywhere in town you see signs of support in storefront windows. Local businesses and churches organize food banks and picket line donations. The local gas station lets picketers use the ice machine after hours. There is tension in the air here, but there is also unity and respect.

The Steelworkers international is helping with some support for picketers. About 160 strikers have found other work while the strike is on.

“I have a better outlook on a union after this,” Sandau says. “The solidarity and help we’ve received has been plumb amazing. I’ve been very humbled seeing all the love and support for a little union in Mullan, Idaho.”

Workers from the mine and the mill, where the ore is processed before going to a smelter, rarely had any connection before the strike began, maybe brief moments at a union meeting or in the parking lot before work. They are two different work environments and identities. But this strike has brought families together, through event like picnics and potlucks. The strike is building the union and bringing new generations into the struggle.

“Remember the Frisco!” a miner says as he retires from picket duty for the day. A whole gang of picketers responds in good-natured chorus, “REMEMBER THE FRISCO!”

In 1892, during a violent shoot-out with company guards, striking miners dropped dynamite down the flume of a four-story building at the Frisco Mine from the top of the hill. Six were killed during the confrontation, three miners and three company men, prompting a four-month occupation of the region by the Idaho National Guard.

Again in 1899, brutal repression of unionists forced reprisals from the workers. This time striking miners hijacked a train at gunpoint and loaded it with dynamite. The train stopped in every town, collecting 1,000 strikers headed to the Bunker Hill Mine, which they obliterated in a terrific explosion.

The reaction from the governor was the indiscriminate arrest of all men in the Silver Valley. Workers and the innocent alike were forced to build their own prison and live in harsh conditions. Some men died in wooden jails their captors called “the Bull Pen.”

It was in this climate that the militant Western Federation of Miners was forged, a predecessor to the International, Mine, Mill & Smelter Workers, who would merge into United Steelworkers locals in the ’50s and ’60s.

There is a genuine, inarticulate militancy here like nothing I have ever encountered: a furious quiver in every striker's voice, screaming for justice. This entire community has been betrayed by the mining company, but it’s a betrayal that has been smoldering underground in the old timber beams for 130 years.

Hecla stirred up something in these hills its managers clearly did not intend. Multigenerational memories of pain and hardship have been forced to the surface, a righteous, subterranean fire fueled by all those workers who have been sacrificed to the mines and mills.

Early in the strike a sign was erected at the Lucky Friday Mine that read “Remember the Frisco.” The company took this as a direct threat and attempted, unsuccessfully, to get an injunction. Those words and that struggle live on as a sort of informal greeting and farewell on the picket line.

I asked an old miner how he felt about the whole ordeal, and with an unapologetic grin he offered simply, “The righteous shall overcome.”

Brian Skiffington is a rank-and-file member of the International Longshore and Warehouse Union. Join the strikers for a rally at Hecla's corporate offices at 6500 North Mineral Drive, Coeur d'Alene, Idaho, on Wednesday, August 2 from 12 p.m. to 2 p.m. PDT.