In Alabama Poultry Workers Victory, A Vote to Stick Together 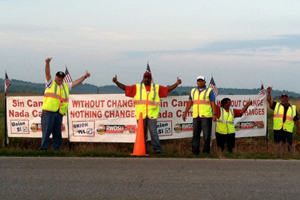 A racially mixed workforce in an Alabama poultry plant defeated management’s attempts to exploit their diversity, turning aside the divide-and-conquer tactics and voting in the Retail Wholesale union. Photo: John Whitaker.

A racially mixed workforce in an Alabama poultry plant defeated management’s attempts to exploit their diversity, turning aside the divide-and-conquer tactics and voting in the union.

Scoring the largest union victory in the right-to-work state of Alabama in a decade, 1,200 Pilgrim’s Pride poultry plant workers voted union overwhelmingly June 12 in the small town of Russellville.

The workers, who are 20 percent Latino, 40 percent black, and 40 percent white, voted 706-292 to join the Retail Wholesale and Department Store Union, a division of the Food and Commercial Workers. The victory comes after three previous attempts by UFCW.

RWDSU organizer Randy Hadley said the company used “the language barrier to divide the Latino Spanish speakers from the white and black English speakers. Threatening folks with plant closings, firings, telling one group of workers one thing and another group something completely different.”

The union was prepared with bilingual organizers, bilingual meetings, and bilingual materials.

According to the Government Accountability Office, poultry workers are 46 percent Latino, representing a major shift in the ethnic composition of the workforce over the last two decades. Elsewhere in Alabama, immigrant workers—including many in poultry plants—met the state’s “show me your papers” law with a day of wildcat strikes last October.

Pilgrim’s Pride, the American division of the Brazilian-owned beef and poultry multinational JBS, is the second-largest chicken producer in the United States. The company says it employs 38,000 workers.

One campaign leader was Sharon Hill, who had been a union member in a blue jeans factory for 18 years until the employer shipped her work to Mexico in 2001. Along with former RWDSU members from a closed plant in Athens, Georgia, who came to work in Russellville, Hill spread the union gospel inside the plant.

“We just had enough,” Hill said. “It was about the bosses treating us with the utmost lack of respect. Making decisions that affected us without ever consulting with us and asking what we think, talking down to us, forcing us to work whatever hours they want, sticking us with inadequate and unaffordable insurance, taking away longstanding bonuses, no acknowledgment of seniority, and even denying us the most basic needs like regular bathroom breaks—we had enough.”

Morrison “JR” Harris, who circulated union cards, said, “We were very intentional about going about our union business quietly until we knew we were strong and united. At some point folks realized that we were in this together and regardless of the fears associated with being fired for organizing, folks were signing up left and right.”

In a matter of weeks they had 78 percent of the workforce on certification cards.

T-Shirt for Your Troubles

“Those shirts were one of many straws that broke the camel’s back,” Harris said. “Most of us were like, really? T-shirts? Two thousand of them? It really showed some of us that between legal fees and anti-union consultants, this fight was truly about power, not money for the company. They would spare no expense.”

At one point the organizing committee made a petition outlining the improvements the union would be bargaining for and took it to one of many captive-audience meetings. They presented the petition to managers and asked them to commit to the conditions and sign on the spot. It was an educational moment when management flipped out and turned them down.

After several discussions with local authorities, union organizers set up camp up to 17 hours a day for 48 days at a busy intersection workers had to pass by on their way to work. Perched across the street from the plant, their banner read “Without Change Nothing Changes/Sin Cambio Nada Cambia.”

Hadley said, “Most unions go door to door canvassing workers; we chose to instead set up camp on the boss’s front lawn.”

After long days at work being forced to consume anti-union propaganda, at the end of their shift workers would stop by the occupied union corner and talk with organizers. Hadley said being near the plant site also allowed the union to respond to management misinformation quickly.

On election day, after several hours of voting it became clear that this shop was indeed ready for change/cambio. The management team walked away well before the polls closed, ceding the election to the workers.

This is a perfect example of how workers can turn the typical tactics of union busting, and turn them against the employer who uses them.

Confront management in captive audience meetings, and who is the captive.

Use a management a gimmick (t-shirts) to show how they will spend money to fight labor, but not on labor.

But all of these tactics are meaningless unless there are workers that refuse to let an internalized racist class system, and keep their eyes on where the real problem is. Behind the boss's door.