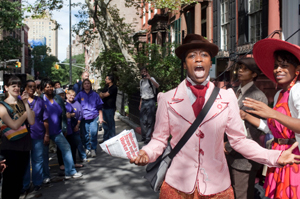 Nursing home workers say their boss cheated them and used the proceeds for an "Institute for Justice" at New York University. Street theater brought the boss's "best practices" to life at Thursday's protest. How to fire workers without getting in trouble? “Hire them back at lower wages!” Photo: Dave Sanders.

Nursing home workers in the Northeast say the owner of their chain cheated them and used the proceeds to fund an institute of justice at New York University.

A skit featuring mock research proposals that highlighted nursing home workers’ actual conditions greeted the institute’s new fellows on their first day. One explained how to best fire workers without getting in trouble: “You just hire them back at lower wages!”

Licensed practical nurse Jillian Jacques said Daniel Straus’s nursing home chain, Care One, fired 10 workers after they voted in SEIU 1199 at a New Jersey facility. They say they were fired in retaliation for pro-union views.

Before the union drive, aides had been promised $13 an hour but received $10, Jacques said, and LPNs were skipping lunches and working off the clock after their shift because workloads were so high.

Workers turned to SEIU 1199 for help, and management replaced the administrator at the central New Jersey nursing home as soon as they discovered a union campaign was under way. The new boss offered steady hours and promised to honor the pay scale, but good cop turned to bad when the workers voted in the union 36-26 last September.

Management brought in loyalists from other facilities to surveil the workers, Jacques said. They wrote workers up for the smallest mistakes. Jacques, one of the leaders of the organizing campaign, was fired because management claimed a patient didn’t receive an aspirin (she disputes the charge). Others were forced onto part-time schedules until they quit.

Management even secured Jacques’s cell phone records to try to prove she was on the phone during work hours—she wasn’t.

The company sicced seven lawyers from different firms on the new union, pushing a decertification petition, which failed.

She wants her job back, and the union is pursuing an NLRB case for the fired workers.

Straus’s chains, Care One and Health Bridge, have 70 facilities in nine states. They own their own pharmacy company and manage many of the nursing homes through other corporate holdings, disguising their true operating costs—and profits.

The New Jersey nursing home is the seventh Straus facility SEIU has organized. The first six, all in Connecticut, are facing hard-edged contract talks.

Deborah Chernoff of 1199 New England said Straus’s chains are attempting to push 800 members in Connecticut into a strike or lockout, demanding $5 wage cuts, to $9 an hour. Management wants to strip the union-negotiated staffing ratios and force employees to pay for most of their health care costs.

Care One and HealthBridge are attacking 37 of 38 clauses in the contract—only “management rights” is left untouched.

Managers fired 48 housekeepers in Connecticut and rehired 46 at lower wages, claiming they were new employees. The NLRB issued a complaint, and the union is seeking to restore their seniority, lost benefits, and back wages.

Straus’s companies are “very high on the list of the worst employers” in an industry known for its abusive labor practices, Chernoff said.

Mischa Gaus was the editor of Labor Notes from 2008 to 2012.mischagaus@gmail.com
Related
Viewpoint: The NLRB is Underfunded and Understaffed—And That’s a Big Threat to the Current Organizing Wave »
Review: On the Line: A Story of Class, Solidarity, and Two Women’s Epic Fight to Build a Union »
How Starbucks Workers Won in Mesa »
Labor Must Rise Against Vaccine Apartheid »
Striking Massachusetts Nurses Outwait Corporate Giant Tenet »