School and Campus Workers Say: Not Until It's Safe 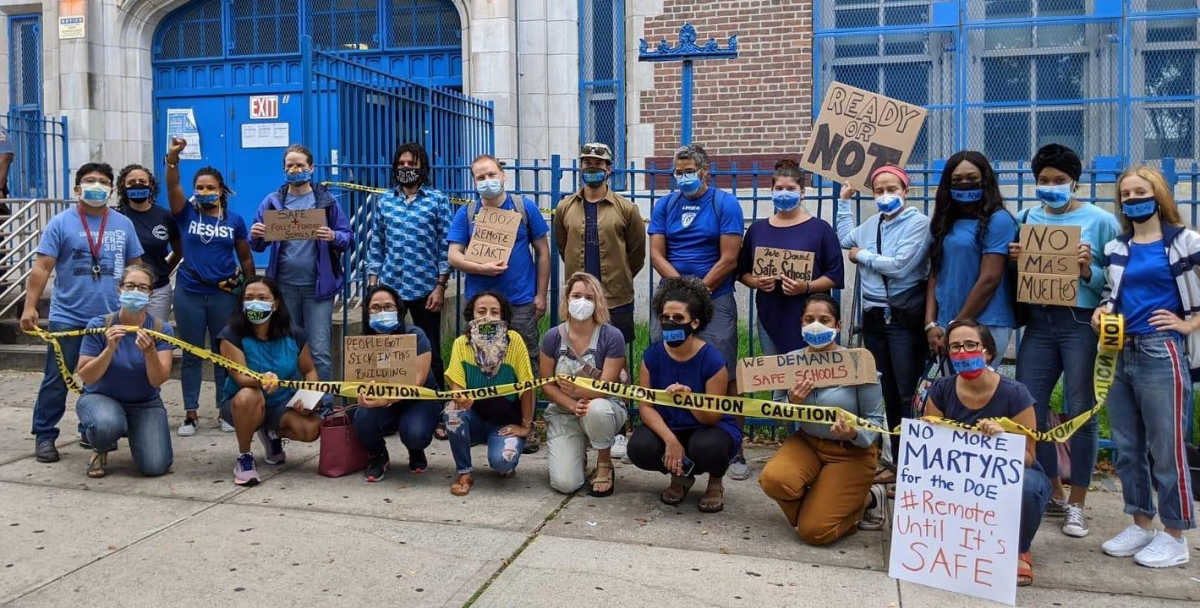 The push to reopen schools and campuses is hitting educators with a brutal fact: your employer will place you in deadly danger for the sake of the economy.

You knew this already if you worked in a meatpacking plant, an Amazon warehouse, or a construction site. But until 2020 you didn’t think a school or university job might kill you.

And employees aren’t the only ones at risk. As we saw in March, schools can become superspreaders, where students and employees pass the virus around and then carry it home to their families. If New York City schools had closed one week earlier, Columbia University researchers found, the city would have suffered 218,400 fewer coronavirus cases and 18,500 fewer deaths.

What would it take to make schools safe? Deep cleaning won’t cut it, since the virus spreads through the air. Facilities would need extensive HVAC upgrades and other renovations.

Congress hasn’t been forthcoming with the money for that—nor for adequate paid leave, putting working parents in an awful bind. (For specifics on federally mandated leave, see “School Is Remote—Can I Get Leave to Stay Home with My Kid?”) Across the country workers have been patching together their own childcare for months. Meanwhile the nation’s 643 billionaires have been allowed to loot the disaster scene, adding $685 billion to their wealth since the pandemic began.

ALL OVER THE MAP

The outcry from school and university workers is furious: don’t force us back until it’s safe. The results are all over the map. Some educators have won a remote-only start to the school year. Others pushed their start dates later.

Some are being forced into school to juggle remote and in-person students. Others are being required to come into empty classrooms to teach online.

Workers who had previously built union power have more leverage. Teachers in Los Angeles and Oakland, who had powerful strikes last year, won a remote reopening quickly. In Chicago, after three major strikes in a decade, just the rumor of a strike vote was enough to secure a remote start. But the union is still battling the mayor over what remote teaching will look like.

An unproven strike threat wasn’t so effective in New York City and Detroit, where union leaders—prodded by organizing from below—talked tough, then settled short.

Although the problem falls squarely in the lap of the federal government, students and hard-pressed working parents could easily be pitted against educators. But it’s not so easy when union activists have built solidarity with students through years of joint organizing, as in San Antonio.

Conditions are shifting fast. Some universities reopened and re-closed within days. Graduate employees at the University of Michigan were barely back to work before they struck for nine days, winning, the union says, “workable pandemic childcare options” and other improvements.

After a teacher tested positive in one New York school, others picked up folding chairs and moved their prep outside. Under continued pressure, yesterday the mayor once again delayed the start of in-person school for most students. Another work-outside protest was held in Andover, Massachusetts.

And for those who have defeated unsafe reopenings, the next battle may be against mass layoffs, as in Rochester, New York, and at the University of Massachusetts-Amherst.

Nobody’s fight is over. The start of the school year was just round one.

A version of this article appeared in Labor Notes #499, October 2020. Don't miss an issue, subscribe today.