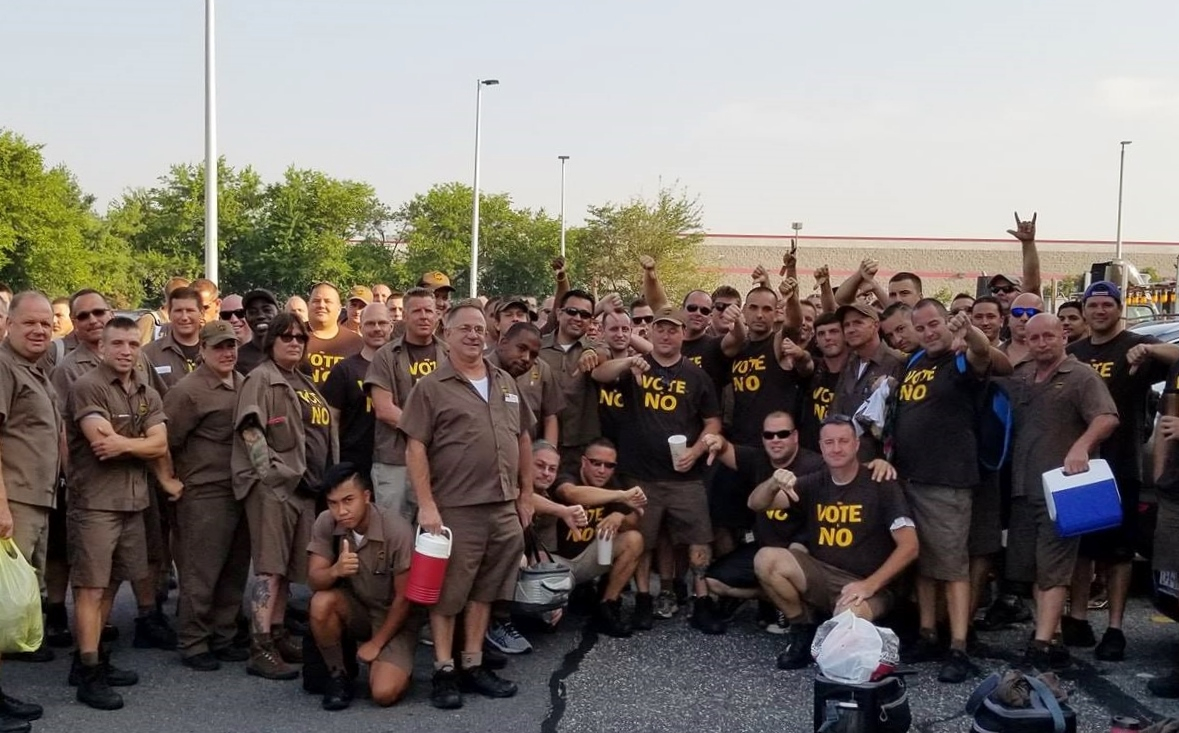 Concessions in the deals have sparked widespread anger. This week’s bombshell came when Teamsters Package Division Director Denis Taylor threatened to impose the contract even if members vote it down. Photo: UPS Teamsters United

This article, originally published October 5, was updated October 8 and October 18 to reflect the results of the vote count and subsequent developments. –Editors.

Exploiting a constitutional loophole, Teamsters brass have declared that the controversial tentative agreement covering 243,000 workers at the package giant UPS is ratified, despite members voting it down by 54 percent.

Package Division Director Denis Taylor weirdly claimed that he planned to keep negotiating to improve the deal—but also that members wouldn't get a chance to vote on any further changes.

Local 413 driver Nick Perry, one of several rank-and-file observers who attended the vote count, engaged Taylor in a “spirited debate” about this doublespeak moments after the news broke.

Days earlier, Taylor had threatened to impose the contract even if members voted it down, unless voter turnout topped 50 percent or “no” votes topped two-thirds.

This two-thirds language wasn’t new, Perry said. But invoking it was a political choice. Hoffa and his crew didn’t exploit this option in the previous contract “because they knew there’s no way in hell they would be there today if they had.”

Now activists like Perry are training their sights on closing the loophole—and ousting the administration that used it to overrule a democratic vote.

Such a solid contract rejection was a big victory for the “vote no” movement, which is backed by the rank-and-file network Teamsters for a Democratic Union (TDU) and activists from the Teamsters United coalition that nearly unseated President James Hoffa in 2016.

Concessions in the deals sparked widespread anger and a vote-no movement. However, the company and union officials both campaigned hard for a yes.

“Quite honestly I think they were caught off guard by the amount of ‘no’ votes and the fact that a bunch of supplements were voted down,” said Jeff Fretz, a full-time inside worker and union steward in central Pennsylvania.

Even UPS initially took the October 5 vote count results to mean that the contracts had not been ratified.

But despite an outcry from members, and despite seven of the union's international vice presidents calling for an emergency executive-board meeting to resolve the crisis, top union brass stuck to their line.

Hoffa himself has been quiet, letting Taylor take the fall. Days after the vote count he and top staffers jetted off on a 10-day trip to a conference in Singapore.

Ten of the 28 local and regional supplements and riders were rejected as well, though the union is considering five of them ratified under the same loophole.

The constitution wasn't interpreted this way in 2013, when 10 supplements and riders were rejected, renegotiated, and re-voted, without meeting the vote thresholds the union is now demanding.

As for the tentative deal covering 12,000 Teamsters at UPS Freight, this year it was rejected with 62 percent no and 66 percent turnout, so it's back to the negotiating table.

UPS Freight members’ priority was to eliminate subcontracting. The rejected pact would modestly reduce the percentage of freight that could be subcontracted, but would still allow the total tons hauled by subcontractors to increase.

The union has given notice that the contract extension at UPS Freight will expire on November 12, which means a strike is possible at UPS's important industrial freight division. Will the strike threat be used to win real raises and protections against subcontracting out drivers' work, or just to scare members? That remains to be seen.

A peak-season strike is also being contemplated in Chicago, where Teamsters Local 705 negotiates its own UPS contract separate from the national agreement.

The same week as the UPS vote count, the enormous retailer and shipper Amazon announced it would raise its minimum wage to $15.

That highlighted a shortcoming of the UPS deal. Going into bargaining, the biggest demand from the overwhelmingly part-time inside workers who sort, load, and unload parcels was for a $15 starting wage, with catch-up raises for people who’ve been underpaid for years.

What they got instead was a $13 minimum, with no catch-up raises. UPS is forecasting $6 billion in profit this year.

Amazon is both a major customer and a growing competitor of UPS. The news of the raise there means “there is absolutely no way we can pass this contract,” said Kristan Turns, a part-timer who has been loading packages onto jet planes in the Dallas heat since 1999 (“186 years in ramp time”).

She said Amazon already offers benefits pretty comparable to UPS. The pay differential will mean “it takes four and a half years to catch up to one of our major competitors,” she said. “Teamsters should be setting the bar, not allowing nonunion companies to set the bar for our wages.”

For the drivers who deliver packages, the biggest sticking point is that this deal will create a second tier of “hybrid drivers” who will deliver packages at a much lower wage.

The tentative agreement also does nothing substantial to address workers’ other big concerns: excessive forced overtime, technological surveillance, and harassment by supervisors.

CAN THEY DO THAT?

The union’s antidemocratic move relies on language in the Teamsters constitution that allows negotiators to accept a contract if fewer than half the members vote, unless at least two-thirds vote no.

According to UPS Teamsters United, Taylor claimed in a meeting of local UPS leaders that his hands were tied. In reality, though awkwardly written, the provision clearly says that bargainers have the option to negotiate better terms.

However, federal law gives union leaders wide latitude to decide how to interpret the constitution.

There's no law guaranteeing members the right to vote on their own union contracts at all. However, the Teamsters like many other unions have enshrined that right in their constitution, along with rules governing such votes.

Representatives of the company and some local unions pushed a yes vote in the workplace, while discouraging vote-no activity.

The Hoffa administration and UPS barraged members with multiple national mailings urging a yes vote on the deal—in all, at least a million pieces of mail.

“It was like getting hit with a baseball bat every time I opened up my mailbox,” said Turns. “I can’t believe how much money we wasted on that campaign. If the contract they want us to vote yes on is so great, then why are they having to sell it that hard?”

In Pennsylvania, supervisors were reportedly leading workers individually to computers, logging them in to vote, and directing them to UPS’s statement in favor of the contract. Others were pushing employees to download the company’s app on their cell phones and vote that way.

In Los Angeles, Teamsters were thrown out of UPS parking lots for handing out vote-no leaflets. In New York they were told they couldn’t park their cars in company lots if they had vote-no signs in the windows.

In Dallas, at least two employees received disciplinary letters warning them that the “no solicitation at work” policy barred verbal conversations about the contract. Meanwhile supervisors on the clock cornered individual employees with vote-yes talking points.

The previous UPS national agreement in 2013 barely passed, with 47 percent voting no. Member rejections of several of its regional supplements held up the whole thing for almost a year.

The Teamster constitution had been overhauled in 1991 to give members more democratic rights, as part of a consent decree that rank-and-file reformers pushed for to remedy the union’s ties organized crime.

Members won the right to vote on local supplements and riders to national contracts. The constitution stipulates that the national agreement doesn’t go into effect until all supplements are ratified.

Teamsters in 2013 were angry about concessions on health care, among other issues. After some supplements were voted down, bargainers went back to the table and negotiated improved benefits and lower out-of-pocket costs.

This year, a number of local leaders recommended voting no, including in strongholds of opposition to the 2013 contract and support for 2016's opposition ticket.

The union's apparent plan to impose the rejected contract has sparked a wave of fury from Teamsters against their national leaders—and against the local leaders who have been carrying water for Hoffa.

The Teamsters United coalition in 2016 did especially well among UPS Teamsters, 70 percent of whom voted against Hoffa.

The next national election is in 2021. That's also when members get their next chance to amend the constitution to get rid of the two-thirds loophole.

Some locals, though, have elections as soon as this fall. Local officers have a better shot at becoming delegates to the 2021 convention, so these races will set the stage for the next national fight.

Slates fueled by the vote-no movement are running for office in the biggest UPS locals in the Northeast (Local 804, New York City) and the South (Local 767, Dallas). Many members are as frustrated with poor local contract enforcement as they are with givebacks.

The incumbents in New York are scrambling to get in touch with members’ mood. The current president announced at a rally that Local 804 would take the concept of the second-tier hybrid driver “and run with it,” but he took heat from members and soon backpedaled, saying his comments had been misunderstood.

Cohen and the others putting together a slate in Local 804 had already spent weeks of their own vacation time building momentum for a no vote and a more militant approach to defending the contract. “It’s about doing things that put a fear into the company,” he said.

Local 804 voted a staggering 95 percent no on the national deal. The local supplement was rejected in a similar landslide, so negotiators are headed back to the table.

Five years ago, the contract vote in Dallas was an overwhelming yes. But times have changed.

Local 767 members backed the Teamsters United ticket against Hoffa in 2016. This year, 57 percent rejected the contract.

Turns is co-coordinating the campaign for the 767 Teamsters United for Change slate, with a vote count in November.

“We have always been a big Hoffa hall,” she said. “If you weren’t on the side of Hoffa you would never say anything out loud—and that’s changed. You can say it out loud, you can say it over the P.A. system.”

Don’t worry lemmings ! JC at 705 will sell you all out. Don’t be mad he needs the dues money for his e board of high school graduates since he pays them six figure salaries.

Amazon benefits are in no way comparable or even remotely as good as those offered to union UPS employees.....at least get the fact straight so people can make an informed decision.

Our rank and file members have spoken....it is time our ELECTED officials recognize our wishes and go back to the bargaining table and address our concerns... There are quite a few things to fix.... Firstmost, the 22.4 language. If they are working inside, they should get 22.3 wages, if they are delivering, they should get DRIVER wages. They should have the SAME rights and privileges as a RPCD, 8hr requests and over 9.5 hr protection... NO 70 hour workweeks, PERIOD!!! $15/hr is NOT an extravagant wage, in this day and age... When I started back in 88, starting wage was $8/hr, which was over double the minimum wage at that time. We work hard, every day. Our work ethic deserves to be recognized. UPS is great, but only because their workers made them that way. Hoffa and Taylor, stand up, and be a TEAMSTER, remember your roots, and do the right thing and fight with us, not against us!!!

Jesus if that’s not collusion between UPS management and union leaders I don’t know what is. Plus, UPS management soliciting yes votes and trying to persuade employees to vote for contract? In effect trying to influence the course of union votes?? I’m pretty sure that’s illegal under the NLRA.