Breaking the Silence on Sexual Harassment 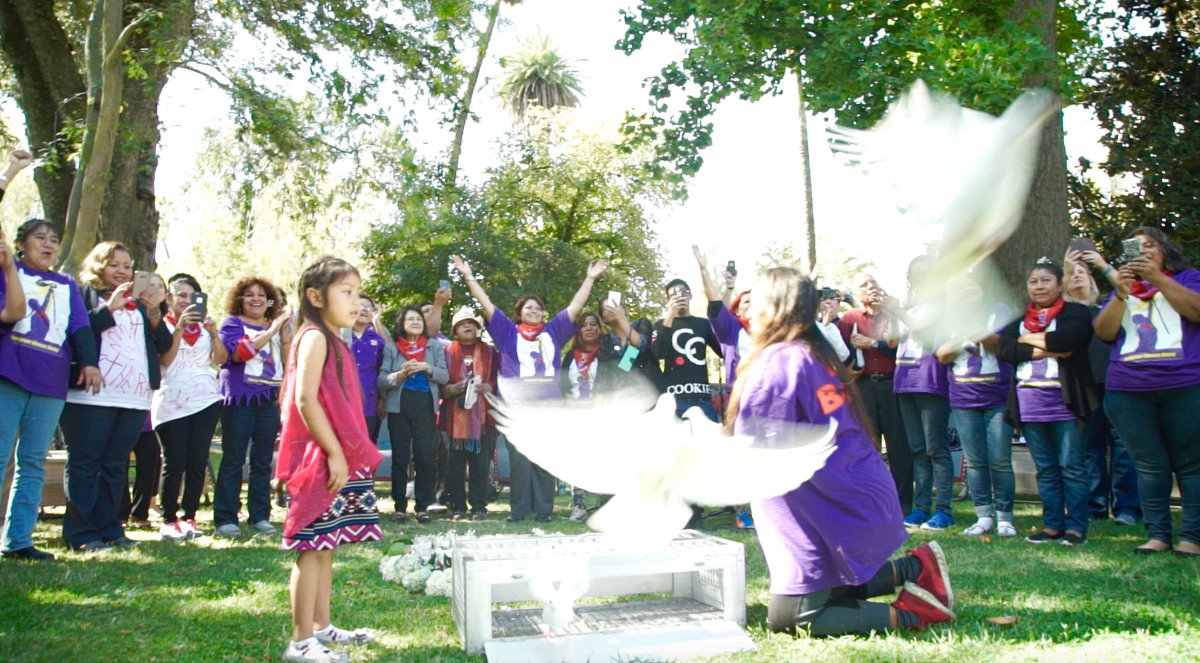 This September, California janitors won a statewide bill that cracks down on sexual harassment. Janitor leaders, many of them survivors of sexual violence, released doves to close a five-day fast in front of the state capitol. Photo: Shireen Alihaji and Jaime Ballesteros

When we think of the biggest issues at work, wages and benefits usually top the list. But in many industries, sexual harassment and assault are huge concerns—even if nobody’s talking about it.

Workers who experience harassment on the job can file charges with the federal Equal Employment Opportunities Commission, but they face many hurdles to get even a hearing. Deadlines are short. Only employers with 15 or more employees are covered.

Add to that the stigma and the fear of reprisal, and it’s no wonder that the vast majority of workers who experience harassment or assault do not go public.

So how can a union or worker center unmask the problem and begin to tackle it? Current campaigns by janitors, hotel workers, and restaurant workers offer a roadmap.

Sexual harassment can happen in any workplace, but women who work alone are especially at risk. Immigration status or language barriers can also make some more vulnerable.

Janitors are a case in point. They’re predominantly female, often working late at night in isolated workplaces, in an industry divided up among many subcontractors. The 2015 PBS documentary “Rape on the Night Shift” exposed how widespread and underreported sexual violence is for janitors. In the film, numerous janitors tell their stories of abuse on the job, many for the first time.

After the union screened the video for janitors, its elected executive board met. “The women in the room, one by one, stood up and started sharing stories,” says Valles.

Like janitors, hotel workers are often isolated on the job. When a hotel maid accused International Monetary Fund head Dominique Strauss-Kahn of sexual assault in 2011, she broke the silence around a problem that was far more common than hotel managements acknowledged.

Since then, UNITE HERE has held speak-outs on sexual harassment and assault and strengthened its contract language. “We see this as a workplace and safety issue,” says Abby Lawlor of Local 8 in Seattle.

Since it represents only 16 percent of Seattle’s hotel workers, the union developed a ballot initiative to extend protections citywide. It passed in November with an overwhelming majority.

Now workers will carry panic buttons with them at all times. The button sends a signal to the supervisor, indicating the worker’s location.

Hotels are required to record employees’ accusations about guests, and to warn employees when a guest on the list returns to the hotel. If a complaint of sexual assault or harassment is backed up by a sworn statement from the worker or other evidence, the hotel must go further, banning that guest for at least three years.

Workers have the right to be assigned to another floor or work area if they have experienced sexual harassment or violence from a guest there.

Besides sexual violence, the initiative includes other new protections for workers’ health and safety. It requires larger employers either to provide family health insurance or to pay additional wages to help offset insurance costs. It limits workloads and provides some job security if a hotel is sold.

The city is still developing enforcement mechanisms. But union members are already on the front line of outreach to other hotel workers about their new rights. “A lot of our members work second jobs in nonunion hotels,” says Lawlor. “They are able to talk about the new protections much more effectively than staff.”

Master contracts covering 20,000 janitors were about to expire, so a first step was to add a question on the bargaining survey about whether members had experienced sexual harassment or assault on the job. The union got 5,000 responses to the question.

“It was one of the top three issues,” says Valles: “wages, sexual harassment, and workload. It couldn’t be clearer it was an issue.”

But the union wasn’t sure where to go next. Staffers were concerned about how to support members, says Valles. “We heard: ‘The union is not social workers. What’s going to happen? We’re going to trigger people.’”

A key lesson was to take leadership from organizations that already knew how to support sexual assault survivors, says Valles. The union partnered with the California Coalition Against Sexual Assault, Mujeres Unidas y Activas, and the East Los Angeles Women's center.

With help from these groups, the union began to train members who had come forward with personal stories to become promotoras, or peer educators. Nonunion janitors who had experienced harassment also joined the promotora circles.

Leticia Soto, a USWW member and night-shift janitor, took the training. “We went through a personal process of overcoming all we had gone through,” she says. “But we also learned how to go out and give support to women who, because they don’t have a union or because of fear, are still staying in the shadows.”

“It was clear what we needed and what we were lacking,” says Valles. “It was education in the buildings, the way we’ve done on immigration or wage theft.”

Sixty women are now active promotoras, the backbone of the campaign. The union also led a “compadre circle” where men came together to talk about their role in stopping sexual harassment.

It’s a good example of how fighting on an issue that members feel so deeply about can draw people closer to the union.

As a steward, Soto would bring campaign information to union meetings. There was lots of support, but sometimes also pushback. “We heard things like, ‘Why are we doing this? Is it really going to benefit us? Maybe it’s going to be a waste of time,’” says Soto.

But when questions came up, “the executive board and union president pushed back. They said, ‘You know this is happening,’” says Valles. “Our community partners told us, ‘Not everybody’s going to come on board. You’re not going to change sexism and racism overnight.’”

The restaurant industry is another sector rife with harassment. According to a report from the Restaurant Opportunities Center-United, it has the highest rates of sexual harassment of any industry.

That’s directly tied to the lower minimum wage for tipped workers ($2.13 at the federal level, though some states do better). “It’s actually part of the business plan,” says ROC-United Research Director Teófilo Reyes. “Restaurant workers are more likely to be told to dress in revealing clothing.”

“Customers have asked why I don’t dress like the women in the commercials,” said one. Others reported harassment by owners or supervisors, as well as widespread wage theft and health and safety violations.

Although worker mobilizations, combined with other scandals, helped push Puzder to withdraw his nomination, ROC plans to keep supporting workers at Carl's Jr., Hardee's, and other restaurants to bring forward sexual harassment cases.

The fact that some of the union’s contractors had been named in the documentary helped create leverage. In May the union won a new master contract that requires training for supervisors and workers, and ensures that workers can make complaints to managers above their direct supervisors.

But the promotoras wanted to go further to protect all cleaners, union and nonunion. So the union worked with legislators to develop a statewide bill, the Property Services Worker Protection Act.

The union got local mayors and union contractors to pledge support for the bill. The union even paid for “End Rape on the Night Shift” billboards in strategic locations.

When they still weren’t clear that Governor Jerry Brown would sign the bill, the promotoras decided to stage a fast.

In September, 12 women—all survivors of workplace sexual violence and harassment—began their hunger strike in front of the state capitol. Community supporters and other union members rallied with them every day.

The fast’s meaning was broader than just the bill, says Valles. “The promotoras said, ‘We want to fast to reclaim our bodies. We want this for ourselves, for healing.'”

Many of the women, including Soto, read out open letters to their attackers. Most had never shared their stories publicly before this campaign. Each day closed with prayers and healing ceremonies.

After the group had fasted for five days, Brown signed the bill into law. “It was like a light shining in that moment,” says Soto. “You realize that however weak you might feel, there is a strength inside for you to fight all the way to the end.”

To close the fast, the group released doves. “In releasing this dove,” one leader said, “I’m releasing our hurt and pain, and transforming it.”

The new law, which takes effect in 2019, requires employers to train employees and managers on sexual violence and harassment. To pull subcontractors out of the underground economy, it also requires all property service companies to register with the Labor Commissioner.

Meanwhile the promotoras have turned their attention to developing the training that union contractors will be obliged to provide to all employees under their new contract. The union is exploring creative ideas like telenovela (soap opera) formats that can be paused, so participants can debrief on scenarios they’ve just watched.

Promotoras also stand outside nonunion buildings to talk to janitors on their breaks or as they enter work. “We ask how they feel at work, and that’s how the dialogue starts,” says Soto. “We give them our support and tell them they have rights, and they don’t have to be afraid at night.”

Some quotes in this article have been translated from Spanish.

Read more: Check out the Labor Notes book Stopping Sexual Harassment. How about when the harasser is another union member? Here's some guidance on what to do.

A version of this article appeared in Labor Notes # 456, March 2017. Don't miss an issue, subscribe today.