State of the Apple (Rotten) 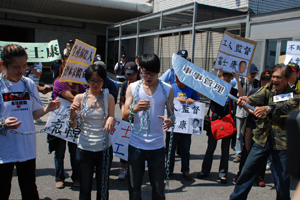 Reports on Apple's abysmal factory conditions in China are rampant, and sparked this Hong Kong protest in June. Apple just partnered with Nike's favorite factory-monitoring group. Is that a step forward? Photo: SACOM.

President Barack Obama blew a kiss to Apple in last night’s State of the Union speech, praising the entrepreneurial spirit of its founder, the late Steve Jobs, as the cameras panned to his widow in the audience.

Obama’s timing couldn’t be weirder. In the last month, Apple has released a damning audit that found almost 100 of its supplier factories force more than half their workers to exceed a 60-hour week. The company announced responsibility for aluminum dust explosions in Chinese supplier factories that killed four workers and injured 77. Hundreds more in China have been injured cleaning iPad screens with a chemical that causes nerve damage.

Apple was just subjected to a “This American Life” radio special reporting on its abysmal factory conditions in China. Last weekend a front-page New York Times story asked why the company offshored all of its manufacturing, mostly to China. (The answer is found in what its executives call “flexibility.” Tens of thousands of workers there live in factory dorms on-site, where, the Times reports, they are woken in the middle of the night and forced onto 12-hour shifts when Apple decides a product needs tweaking.)

In the face of all this bad press, the tech darling’s response has been to reveal its supplier factories and to announce a partnership with the Fair Labor Association to do stepped-up factory inspections. The FLA is the partly corporate-funded group that until now only monitored apparel factories, and which Nike helped establish after its own scandals in the ’90s.

In sum, Apple is now doing what Nike has been doing for nearly 15 years: the apology-plus-transparency formula, straight out of the manuals offered by “reputation management” consultants.

This was certainly enough for most mainstream media and even some activists. Some more dubious observers said the actions came about because of “consumer pressure,” claiming the company acted to quell the displeasure of the legions of iPhone worshippers.

It must be said that Apple looked more serious this week than it did several years ago, when it shrugged off 18 worker suicides at its main supplier, Foxconn, in China. Steve Jobs told the press that the high number of suicides was about average for the Chinese population as a whole. Just last week, Terry Gou, CEO of Foxconn, referred to his workers as “animals” during an appearance at the Taipei City Zoo—not a lot of empathy there, either.

Change the Image, Not the Actual

When anti-sweatshop campaigners in the ’90s relentlessly called Nike out for its miserable, toxic factories around the world, sneaker-buying Americans did have an impact on Nike.

Since then, Nike has spent hundreds of millions of dollars on factory “monitoring” and hired on a “corporate social responsibility” staff of over 200. Nike became a charter member of the FLA in 1999, and has a representative on its board.

What has it wrought? Very little. Richard Locke, a highly regarded business professor and long-time observer of Nike, has been granted extraordinary access by the shoe giant. “A decade’s-worth of high-profile efforts to change sweatshop conditions in overseas apparel factories hasn’t worked,” Locke concludes.

Why hasn’t it? He who pays the piper calls the tune. All these new workers’ rights experts work for the corporations they’re monitoring—either directly, as on Nike’s social responsibility staff, or in NGO mode. NGOs sell their monitoring services to the big brands that are seeking cover while their supplier factories continue the same profitable patterns of worker abuse.

The most recent example where this kind of voluntary monitoring has proved ineffective comes from Indonesia. An Indonesian union won in court a $950,000 settlement this month for 4,500 workers at a factory that supplied Nike. They were forced to work seven days a week without overtime pay—at a big factory supposedly under FLA monitoring for a decade.

This is not to say that these high-profile monitoring operations are worthless. Just ask the shareholders who saw Nike bounce back from being equated with slavery to join the top rankings of “responsible” companies. “Corporate social responsibility” has proved invaluable at repairing brand images and wrong-footing the anti-sweatshop movement—maybe what Bill Clinton had in mind when launching the Apparel Industry Partnership, precursor to the FLA.

In fact, one could argue that the FLA has made the situation worse. It has been monitoring and certifying “compliance” for Nike and other apparel giants for more than a decade, apologizing for the corporations as they continue to squeeze suppliers, crush worker organizing, and cheat workers out of severance pay when their factories flee to lower-cost havens.

FLA CEO Auret van Heerden has excused Nike and its other corporate “partners” for the below-subsistence prices paid to sweatshop contractors, saying “simply blaming buyers and the prices they pay is too simple.”

Meanwhile sportswear companies unabashedly gloat over the power they have to dictate prices paid to supplier factories.

When Reebok and Adidas merged in 2006, an executive bragged on an investor call about negotiations “with all our key footwear and apparel suppliers to lock in cost savings for 2007 that should be in the double-digit million range.”

With Apple, however, we may be able to turn the FLA’s involvement to the workers’ advantage.

An independent Hong Kong-based group, Students and Scholars Against Corporate Misbehavior (SACOM), has years of experience interacting with Foxconn workers.

The situation is similar to what we’ve seen happen with United Students Against Sweatshops, which has developed on-the-ground relationships with garment worker organizations in Latin America for a decade.

USAS and the Worker Rights Consortium, an independent factory monitor funded by its member colleges, have used a combination of pressure inside boardrooms and outside retail stores.

When companies that supply garments to colleges close their contracted factories in the face of worker organizing, or subject workers to unsafe working conditions, the WRC investigates and USAS students agitate.

Through pressure on the corporations at the top of the supply chain, several factories have reopened and hired back workers—with a union.

In China, it is quite possible that SACOM could bird-dog the FLA, insisting on real-time sharing of its reports, for example.

So far Apple, following Nike’s playbook, has produced audits that say violations are occurring, but does not reveal in which factories they’re happening. The FLA also doesn’t insist on that level of transparency, essentially saying “trust us.”

The WRC, by contrast, insists on knowing where the factory is and what’s happening, so it can gauge progress. The FLA could use some pressure to do the same.

In any case, more attention paid to Apple’s supplier factories will further anti-sweat groups’ communications with workers, and help build networks through social media and texting. It’s not the UAW in the ’30s yet, but it’s a beginning.

Jeff Ballinger is a researcher and writer on sweatshop monitoring. He is a member of Worker Rights Consortium’s advisory council. Follow his tweets @press4change.

Related
Review: Dying for an iPhone: Apple, Foxconn, and the Lives of China’s Workers »
From Indonesia to Honduras: How Anti-Sweatshop Activists and Unions Made Severance Pay Mandatory »
Union Official Links Foxconn Deaths to Excessive Overtime »
China's Young Workers Fight Back at Foxconn »
Who Speaks for China’s Workers? »