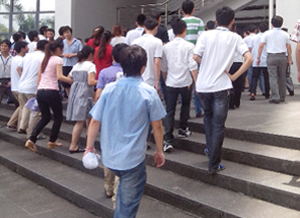 Foxconn workers in China have struck at least four times this year. These strikes tend not to be organized in advance and are often restrained so as not to be targeted by the police. But sometimes workers resort to drastic methods as in these bossnappings.

“There will never be strikes in my company,” Foxconn CEO Guo Taiming once proclaimed.

But just last month, 1,800 workers struck at two Foxconn factories in China—following the example of other Foxconn workers in Taiyuan and Chengdu last year.

Foxconn produces cell phones and other products for Apple and others, and owns property worth $6 billion. It has 1.2 million workers and is the largest sweatshop of ill repute in China. The company drew international headlines when 18 young workers attempted suicide in 2010.

But the much bigger numbers of workers who are fighting back by striking haven’t gotten the same media attention.

Nearly 300 people struck July 24 at one of China’s biggest factories, in Longhua, Shenzhen. They are part of Foxconn’s CP business group, which makes laptops, TVs, digital cameras, and more.

They stopped work at 9 a.m. and marched from their department toward union headquarters, protesting that the company did not allow them to work extra hours.

This is a new phenomenon in Chinese factories since the 2008 recession, which took several years to affect China. Exports were cut and production declined. If they don’t work overtime, Chinese workers in the Pearl River Delta, where these factories are located, are paid only about RMB1000 (about $163) per month, which is not even enough for food. The minimum wage in Shenzhen city is RMB1600, and other cities are lower, but workers cannot even get this much because of the recession.

The strikes of Chinese workers may be not as noisy as those in the U.S., because most times they are not organized in advance. The workers have to keep restrained not to be targeted by the police. They marched around and chanted a little, and then kept quiet and just waited.

After administrators promised to negotiate with them, they went back to work at 3:30 p.m. There’s no news about the negotiations so far. Most times no news for too long means the strike failed. If they fight again, they may win a formal negotiation with the managers or just be suppressed by the police.

At the same time, 1,500 workers of Pulihua in Foshan City, next to Shenzhen, were also on strike. This company also belongs to Foxconn.

Workers occupied the hall of the main building and stood against the police till 6 p.m., because management had said the factory would be moved away and all workers would be fired.

Pulihua workers had already stopped work twice this year, first on March 28 and again on June 6. They were not satisfied with the severance pay offered, and management promised to compensate them. The July strike was over the closing date, with workers fearing the company might flee without paying them.

The government later got involved in the strike, but there’s still no resolution. It’s likely workers will finally get their compensation, as it is a large company and cannot flee like the small ones.

Guo rules the Foxconn empire with cruel military management. Workers have to work nearly 11 hours each day if they want to earn enough for food and housing, and there are endless accidents and injuries on the production line.

Workers living in the same dormitory for a year don’t get to know each other, because Guo fears they would resist.

Today’s generation of young Chinese factory workers are caught between urban and rural worlds. Some 262 million migrant workers from the countryside labor in the cities, where they are denied equal access to many welfare, health, and retirement benefits.

“In the dormitory, I was just like you: / Everyone a stranger,” wrote former Foxconn worker Yan Jun in a poem dedicated to those who committed suicide. “Lining up, drawing water, brushing teeth / Rushing off to our different factories / Sometimes I think I’ll go home / But if I go home, what then?”

But in recent years workers are fighting back wherever there’s a Foxconn factory.

Han Tang works with a worker center in Guangdong province, which includes Shenzhen.

Related
Christmas On Strike: Warrior Met Miners Stick It Out »
Who Might Strike in 2022? Hundreds of Big Contracts Will Be Up »
2021 Year In Review: The Only Way Out Is Through »
Johnson Brothers Strikers Take Their Fight to the Customers »
This Year I’m Thankful for the Revolt Against Two-Tier »