A Look at Three ‘Strategic Campaigns’ 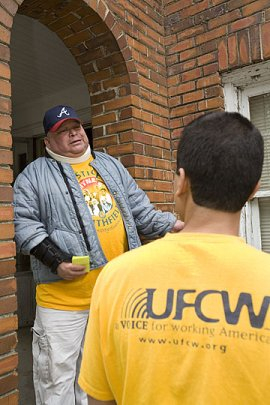 UFCW Organizer Eduardo Peña visits a Smithfield worker who has suffered both neck and wrist injuries at work. The union’s “Justice at Smithfield” campaign has turned an otherwise localized dispute in a single North Carolina pork-processing plant into a wellknown workers’ rights cause around the country. Photo: Jim West.

How can unions tear down the wall erected by management to keep organized and unorganized workers apart within the same company?

This is the central question in several campaigns involving major employers that have gone “doublebreasted.” At United Parcel Service (UPS), Smithfield Foods, and Verizon, unions are currently trying to extend collective bargaining to new facilities or subsidiaries that employ tens of thousands of people doing the same work as their members, but under non-union conditions.

In each of these campaigns, involving the Teamsters, United Food and Commercial Workers (UFCW), and CWA/IBEW respectively, the first goal is to win union recognition, via card check, and then contract protection. To succeed, organizers have to do more than rally non-union workers and help them build new workplace organizations.

They must also get existing members, on the basis of solidarity and self-interest, to put sufficient pressure on the parent company to change its anti-union behavior.

The Teamsters’ current attempt to expand its national UPS bargaining unit to include the company’s freight division appears to be a fairly traditional exercise in backroom bargaining.

UPS Freight employs nearly 15,000 non-union workers—all acquired via a merger with Overnite Transportation two years ago. Overnite was the most anti-union firm in trucking and defeated the Teamsters (IBT) in an ill-prepared strike led by IBT President James Hoffa from 1999-2002.

During the first six months of last year, Teamsters were encouraged to reach out to former Overnite workers once again as part of an organizing campaign. In June, Hoffa announced that an “historic card-check agreement” had been reached with UPS that would “soon bring UPS Freight employees under IBT contract.”

This was followed by a union cardsigning campaign and recognition demand at a single UPS Freight terminal in Indianapolis with only 125 workers. Since then, the IBT has begun “early bargaining” on its national agreement at UPS (which covers 200,000 Teamsters and doesn’t expire until next August), while pursuing simultaneous but separate first contract talks with UPS Freight.

Teamster strategists have, meanwhile, dismissed the idea of trying to “organize multiple locations at once.” Chief union negotiator Ken Hall said, “We know that UPS Freight workers in the 300 terminals around the country have many questions about joining the union. We believe that many of those questions will be answered in the form of a model contract for Indianapolis.”

Members of Teamsters for a Democratic Union (TDU), a reform caucus within the union, worry that the union may be “settling short.” They fear that the “model contract” at UPS Freight will put new members under a company pension plan or leave them with individual retirement accounts, rather than including them in Teamster multiemployer retirement funds.

In contrast to the Teamsters’ lowprofile approach at UPS, the UFCW’s “Justice at Smithfield” campaign has turned an otherwise localized dispute in a single North Carolina pork-processing plant into a well-known workers’ rights cause around the country.

The union has invested heavily in a wide-ranging effort focused on the 6,000-worker Tar Heel, North Carolina facility. The UFCW has decided to forgo any further NLRB election attempts there, because of massive, un-remedied, anti-union misconduct by management going back to the early 1990s. Instead, it is trying to batter the company into an alternative recognition process that would finally enable workers to freely demonstrate majority support for the union.

Much of the activity aimed at achieving this goal has taken place outside of Tar Heel and the plant itself. The union has built an impressive network of labor and community supporters, which includes students, environmentalists, politicians, civil rights activists, immigrant rights advocates, and the clergy.

Meanwhile, in the Tar Heel plant itself, union supporters have displayed a level of shop floor militancy highly unusual for a group without union recognition or contract protection. Hundreds have participated in two work stoppages in the last year.

Working out of a storefront office near the plant, organizers have also encouraged in-plant collective action protesting the lack of clean drinking water in the livestock department and excessive heat on the “kill floor.”

The campaign has been weaker, however, among the 18,000 higher-paid union members who work under singleplant agreements at Smithfield facilities around the country.

Other than facing a largely symbolic union “day of action” last July, plant managers and top company officials outside of Tar Heel have yet to get the message that labor relations on the union side of Smithfield will suffer as a result of its anti-union behavior there.

At Verizon (VZ) in the Northeast, CWA and IBEW are fighting a similar undercutting of their regional contract due to the acquisition of a parallel nonunion workforce from the former MCI/Worldcom.

Thousands of former MCI technicians, operators, and service reps now work for a new nationwide subsidiary called Verizon Business (VZB), which serves corporate and governmental customers. VZ wants to keep them all outside the scope of the CWA-IBEW “legacy contracts” that still cover 54 percent of its “landline” workforce.

VZ’s model for such “union containment” is its successful, ongoing effort to limit Verizon Wireless (VZW) unionization to 50 New York City techs—out of a total workforce of 65,000.

IBEW Local 2222 in Boston began sounding the alarm about the threat posed by VZB fifteen months ago when the VZ-MCI merger was finalized. Unlike earlier IBEW-CWA mobilizations against VZW union busting, which proved hard to sustain, union agitation and protests about the diversion of bargaining unit work to VZB resonated with union workers.

For their part, VZB techs suffered greatly due to the financial collapse of their previous employer, scandal-ridden MCI/Worldcom. They saw little initial improvement in wages, benefits, or job security at their new company, so some responded favorably to overtures from CWA and IBEW.

By January of this year, 150 out of 600 techs in 10 northeastern states had formed a VZB organizing committee, backed by both unions, and added their names to a public “mission statement.”

So far, Verizon has spurned all card check demands. Proclaiming its belief in the sanctity of “secret ballot elections,” the company is insisting on an NLRB representation election (which VZ will then turn into a morass of litigation and delay, before and/or after any vote is held).

Like UFCW at Smithfield, CWA and IBEW have opted out of that trap. They’re trying instead to make VZB a major issue for union members in the coming year. Meanwhile, with help from Jobs with Justice and the AFLCIO, the unions will be confronting VZB’s many public sector customers about the issue of union recognition.

On the CWA side, this “strategic campaign” is being funded with a $6 million diversion from the union’s national strike fund. Several million will be spent this year alone on daylong, “lost-time” training for a “stewards army”—6,000 active members who will be asked to help “Tear Down The Wall at Verizon” between now and expiration of their own contract in August 2008.

Like the UFCW in Tar Heel, CWAIBEW organizers must also sustain an “in-plant committee” at VZB that can bring the union to life on the shop-floor amid aggressive anti-union campaigning by management and possible erosion of worker support due to a flurry of recent pay increases and other improvements.

In both struggles, changes in current management behavior will require the infliction of far more pain than VZ or Smithfield have experienced so far. At both companies, and UPS as well, forcing management to pay the price for pursuing their double-breasting schemes will require concerted collective action by unionized work groups, whose day-to-day cooperation with management must become a much bigger question mark than it is now.

In March, Steve Early finished up a 27-year stint as a CWA organizer, which included work with the IBEW on the Verizon Business tech campaign in New England. For a copy of CWA’s Tear Down The Wall at Verizon training manual, call 781-937-9600 or send an email request to emorneau AT cwa-union.org.