Labor Needs a New Approach to Organizing.... But Members Must Be a Part of It 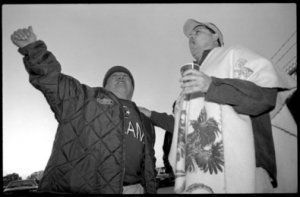 A grassroots organizing campaign was successful last May at the Con-Agra beef plant in Omaha. Photo: David Bacon

Stephen Lerner’s discussion equating lack of union density with lack of union power is interesting, but it omits or dismisses some important aspects of the labor movement.

A grassroots organizing campaign was successful last May at the Con-Agra beef plant in Omaha. Photo: David Bacon

High point: The merger of the CIO with the AFL does not represent the high point of the labor movement, as Lerner suggests. By 1955 the CIO had become identical with the AFL. It had, at the bidding of major corporations and the government, undemocratically expelled 14 of the most democratic unions, and then most were destroyed.

Long-term contracts became the vogue, and the CIO’s postwar plans to transform Social Security into a national retirement and health care system were abandoned for the sake of company-by-company bargaining.

Density: Even though union density in a given company, industry, or geographic location can translate into union power, this can be accomplished in many ways besides forcing workers into unions they may not want to belong to. The Industrial Union Department of the AFL-CIO was supposed to serve exactly this purpose: to coordinate bargaining in industries and along corporate lines. The IUD should be reorganized into a department that joins rank-and-file workers from different unions and countries to make decisions about their company or industry.

Lerner proposes that workers should first be put into the proper union, where they should help organize other workers. Then after all the workers are organized, they can fight for democracy in the workplace and in civil society. But if workers accept that unions are to be organized along dictatorial lines-even if the leaders are benevolent dictators-then why would anyone expect workers to fight for democracy elsewhere?

Democratic unionism is often messy, stressful, and sometimes slow in decision making, but when it works, it is exhilarating. The fact that a union like UE receives many calls from workers seeking not just a union but a democratic union shows that organizational democracy must be part of the equation.

Public recognition: As Lerner suggests, to gain public recognition, labor should launch a campaign, like the fight for the eight-hour day. But a fight for insurance company-provided health insurance is the wrong campaign. A fight to institute a national single-payer health plan would stir the imagination of many non-union workers.

The labor movement certainly needs a new approach to organizing. Such a plan can succeed only if the 15 million union members are part of the discussion and the decision-making. Lerner calls for key unions to begin to act on his plan and swap members (or just take them) without waiting for the rest of the labor movement. Here are some alternative actions:

1. Cut salaries of union officials so that they earn the same pay as their members, and use the saved money for organizing.

2. Democratize the unions so that locals control their own affairs and are workplace-based. Eliminate mammoth amalgamated locals that make democratic functioning impossible. Make staff serve the members, not run the unions.

4. Start supporting the Labor Party and stop supporting politicians and parties who voted for NAFTA. Wage a public fight for labor law reform.

5. Fight for single-payer health insurance that will benefit all workers in the US.

6. Rebuild the Industrial Union Department on a rank-and-file basis to strengthen coordinated bargaining coalitions and to plan organizing.