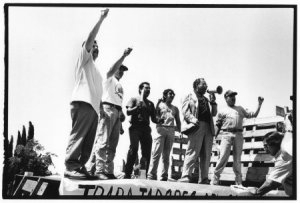 The UE’s organizing campaign at at Cal Spas in Pomona, California relied to a large extent on the in-plant organizing committee, rather than on large crews of full-time outside organizers. But the relative merits of such different approaches were not debated much at the Organizing Summit. Photo: David Bacon

For seven years, AFL-CIO leaders have jawboned unions to organize. The federation has directly funded more campaigns, helped train and recruit new organizers, and supported their work with abundant public relations-and still union membership declines. To address the crisis in organizing, the AFL-CIO convened a summit in Washington January 10-11.

Participants included more than 200 full-time staffers or elected officers from AFSCME, SEIU, HERE, Teamsters, UAW, Steelworkers, CWA, UNITE, Teachers, Laborers, and other unions. The conference was chaired by the federation’s fourth organizing director in the last five years, Stewart Acuff, former head of the Central Labor Council in Atlanta, where he was also active in Jobs with Justice.

The assembled organizers reported on their work with relatively little bluff and bluster. Adopting a self-critical tone rarely heard inside the Beltway, AFSCME Executive Assistant to the President Paul Booth acknowledged, for example, that “it was a mistake [for the AFL-CIO] to announce 1,000,000 new members a year as a goal” -- when widespread union-busting makes that projection pie in the sky.

A series of workshops and panels explored ways to change the organizing climate through creative use of union “financial and capital strategies,” neutrality agreements, card check recognition, or the intervention of campus and community allies. UAW organizers reported on the use of strikes as a unionization tool at Johnson Controls, a rare victory in manufacturing.

Much of the discussion also focused on union restructuring to free up more money for member recruitment. As UNITE President Bruce Raynor noted, key unions seem to “have gotten beyond the hot debate of a few years ago about how much to spend.” But, with many millions now being earmarked for organizing, the new question is: how do those dollars get spent?

The answer varies depending on the union involved and the organizing model it uses. Unfortunately, the relative merits of different models were little debated at the meeting, because the format favored show-and-tell presentations based on what were called “best practices,” although these were not necessarily embraced by all present.

For example, some unions-SEIU, UNITE, HERE, and AFSCME- still fervently believe in “staffing up,” an approach aided by the AFL-CIO Organizing Institute. By hiring, training, and rapidly deploying large crews of full-time organizers and researchers-often recruited from outside their own ranks-they approach the “challenge of growth” like a corporation retooling its sales force.

As a result, relatively little time was spent discussing what should be the central task of organizers-helping workers build, from the bottom up, organizations capable of winning better conditions through sustained workplace activity.

As Booth noted, accomplishing this task on a large scale is impossible without far greater rank-and-file involvement. “What we need,” he said, “is an army, and that can only come from our vast underutilized membership ranks” via “a massive internal campaign to motivate and activate.”

There was, however, scant public acknowledgment at the summit that the intensity of worker support for the labor movement is greatly affected by its overall functioning-not just the zealous door-knocking of young organizing staffers.

In his plenary speech, Raynor actually referred to union democracy as “one of our faults”-a troublesome instrument of obstruction employed by foes of coordinated bargaining, organizing, or restructuring.

The summit tried to step up AFL-CIO efforts to hold politicians accountable for their positions on workers’ rights. To encourage public officials to follow the example of Minnesota’s late pro-labor Senator Paul Wellstone, President John Sweeney presented several awards in Wellstone’s memory. One went to Howard Dean, former governor of Vermont, for backing a successful AFT drive among 1,000 Burlington nurses.

A recently declared presidential candidate, Dean was escorted to the podium by three leaders of the RNs’ campaign, probably the largest group of rank-and-filers present. But just a few weeks earlier, a fundraising event for Dean had been picketed by health care workers.

The workers, members of SEIU Local 285, were protesting the co-sponsors of Dean’s fundraiser, nursing home owners Gerald and Elaine Schuster, two wealthy Democratic Party funders who are close friends of the Clintons and aggressive foes of the local’s organizing.

Local 285 has been seeking for more than four years to have the couple ostracized within Democratic circles for their union-busting. But, in a dramatic illustration of the divided loyalties of many so-called “friends of labor,” quite a few pols have balked at severing their ties with such important donors.

By the night of Dean’s award at the summit, behind-the-scenes pressure from the AFL-CIO had apparently succeeded in persuading him to return any donation from the Schusters (although this has yet to be confirmed in writing).

“We don’t demand enough from politicians in return for union support,” said California AFSCME organizer Craig Merrilees at the summit. “We need to force them to get more directly involved in workplaces disputes-on our side. And we should start distinguishing between the ones who are just ‘friends” and those who really are part of the union ‘family.’”

VOICE OR RIGHTS AT WORK?

The AFL-CIO’s campaign to generate greater public support for organizing-called “Voice@Work”-has been losing steam. Several large affiliates involved in the summit-led by SEIU and the Teamsters-have lately been promoting a new consultant-designed proposal, known as Rights at Work (RAW), to supplement federation efforts in this area.

RAW would be a Washington-based project or committee separate from but funded by the labor movement and its allies. Legal, political, and media work by RAW would counter that financed by the National Right To Work Committee (with its $15 million a year budget).

According to a recent draft proposal circulated by union advisor Greg Tarpinian and University of Wisconsin law professor Joel Rogers, RAW “would be non-partisan, seeking to influence the debate in all political parties, in an effort to create...an America where the right to organize is accepted and secure as part of our culture.”

Some summit participants argued that defending the “right to organize” is too narrow a mission. “We must show that unions are not just about getting more members, ‘market share,’ or money for themselves,” said CWA Executive Vice-President Larry Cohen.

Cohen argued that unions and their allies need to educate both members and the community about “collective bargaining as a public good. Collective bargaining is essential for everyone’s health benefits, retirement security, and economic stimulus of higher wages-plus you can’t have a democratic society without it.”

Cohen emphasized the need to mobilize inside existing unionized worksites.

Noting that the NLRB is now questioning the legality of some modest state-level initiatives to facilitate union recognition without going through the NLRB, Cohen called for a national day of civil disobedience to shut down every NLRB office in the country.

His proposal, based on similar mass sit-ins orchestrated by Jobs with Justice in 1993, was warmly received at the summit but not formally acted upon. There were, in fact, no formal motions made or resolutions adopted on any subject at the meeting-a far cry from its original conception, under Acuff’s predecessor Mark Splain.

Splain apparently hoped that a summit of higher-level players might actually divide up organizing turf along the strict jurisdictional lines favored by SEIU strategist Stephen Lerner and his influential union. (See “Labor’s Structure Stands in Way of Organizing,” December.) It seems that lack of enthusiasm from other unions scotched that plan.

What Booth called the “common understanding” achieved at the summit fell far short of the leadership consensus necessary to, as he put it, “replace the anarchy of organizing competition with complete rules we all have to live by.”

Even if the assembled organizers had come out in favor of sweeping new rules on jurisdiction, these would have been no panacea, and might well inhibit the emergence of new forms of labor organization based on workers’ own initiatives.

The most important way unions can act together right now is by educating and mobilizing members to defend collective bargaining at their worksites. Effective mobilization of existing members-against the many threats to their rights and benefits-is the best launching pad for organizing the unorganized, based on a worker-to-worker approach.

It’s also the only way to develop a “movement for workers’ rights” rooted in the rank-and-file, rather than just the officialdom so well represented at the summit.

Steve Early participated in the organizing summit as a representative of the Communications Workers of America.