SEIU in Washington State: From Amalgamated to Focused 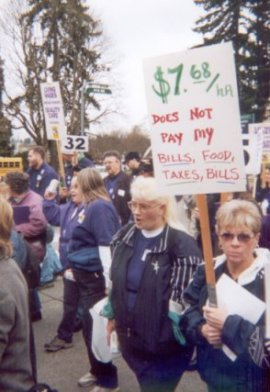 The militant contract campaigns and innovative organizing tactics of Service Employees International Union members have been on the front pages of papers all over the country this year. These fights are critical strategic struggles, and are deliberately shaped by the direction chosen by the union two years ago.

Delegates to the SEIU convention in 2000 voted for a visionary New Strength Unity Program (NSUP) to build bargaining, organizing, and political power for workers in SEIU’s key industries. This commitment is fueling new organizing on the scale of the wave of industrial organization carried out by the CIO in the 1930s.

NSUP is based on thousands of worker-to-worker conversations, polling, strategic industry research, and hearings held throughout North America, about how to build power for workers. NSUP aims for industry-wide campaigns and building power in SEIU’s core industries: building services, health and long-term care, and public services.

To help focus organizing capacity and build industrial power, the union is reorganizing local union jurisdiction to group workers who are in the same industry together into the same local and merge smaller locals together into larger locals within the same industry. In a recent jurisdictional hearing report, the hearing officer commented, “By focusing on one industry, locals come to know their industry better, become known in the industry as the voice for workers in the industry, and don’t face the problem of competing demands from workers in different industries.”

SEIU also got serious about what resources it takes to win. A significant dues increase created the Unity Fund, used to finance “breakthrough” organizing campaigns, coordinated bargaining, and other activities designed to increase density by industry. Unity Funds were used in Washington state for the trailblazing unionization of 26,000 home care workers. This victory in August 2002 was the largest representation win in the state’s history.

SEIU Local 6 in Washington state, which began in 1909 as a janitorial union, provides examples of an amalgamated local undergoing the changes demanded by NSUP. Under the 30-year administration of the local’s recently retired president, Local 6 was a true amalgamated local, representing janitors, workers in hospitals, hotels, airports, schools, nursing homes, bowling alleys, mental health, and the public sector, and even tofu factory workers.

Prior to the NSUP realignments, Local 6 had very little capacity to build power or union density in any one of these industries, with the inevitable result being concessionary bargaining and the erosion of standards.

“Fewer than 7% of nursing homes are union in our state,” says Carol Frontiero, a member-organizer and 22-year certified nursing aide (CNA). Frontiero recently helped organize her co-workers at a small Catholic nursing home, and won union shop and strong economic and staffing language. “Even though Local 6 represents nursing home workers at a sister facility, the union there is very weak, with low membership and no union shop. And then at yet another home in the same chain, the caregivers are represented by SEIU Local 1199NW, and they do have union shop and a voice in staffing decisions.”

The fragmentation of workers within the same employer was convenient for employers, confusing for workers, and distracting to the old Local 6 leadership, who had to balance competing demands from many small bargaining units, negotiating dozens of small contracts. Most of those contracts were bargained without the active participation of more than a handful of workers. Until August 2002, the local had only 10 of 24 elected board positions filled.

The ten Washington state SEIU locals began industrial realignment following the 2000 Convention. Many of the locals voted on supporting New Strength Unity, depending on each local’s own constitution and decisions of the local’s leadership. At Local 1199NW, for example, the executive board developed a resource proposal and organizing plan, which was adopted by the local’s delegate assembly. The entire membership then voted for the dues increase in a vote held by each bargaining unit chapter in each workplace.

Seven thousand hospital members of Local 6 will move into 1199NW by next spring, giving hospital workers greater power to “bargain to organize” and raise standards with key employers, as well as new resources to organize outside of the Seattle metropolitan area. For 1199NW, NSUP means a serious commitment and the necessary resources to organize hospitals in central and eastern Washington, where union density is practically nonexistent.

Workers in non-SEIU industries have been given or traded to other AFL-CIO unions, with good success in gains for workers. Local 6 gave seven stadium food concessions bargaining units to HERE. This summer, HERE mobilized faith and community allies to take on millionaire Paul Allen and his subcontractor concessionaire Aramark. Food service workers won dramatic improvements in their wages and benefits, and are now organizing other concessions workers.

SEIU is chartering a new statewide local to unite the newly-organized 26,000 home care workers with other long-term care workers from Locals 6 and 1199NW. “Long-term care workers have the same goals,” said Carol Frontiero of the decision to charter a new local. “The real decision-makers we have to pressure are legislators, because state funding is our life’s blood. We also dream of bargaining for career ladders, where caregivers within the same union can progress from home care worker to CNA, LPN, or RN, and to have industry-wide rights on staffing, seniority, pensions, and benefits. That will also help solve the long-term care labor shortage.”

Local 6 will remain a building service local, concentrating resources exclusively on facing a set of critical challenges. Although the downtown Seattle market is at almost 90% union density, janitors stand to lose ground big-time, as managers bid out janitorial contracts to nonunion contractors and open “double breasted” nonunion operations in the suburbs. Janitors will need to mobilize to heat up the streets of Seattle next year as the master agreements expire up and down the West Coast in 2003.

The leaders of the CIO in the 1930s mobilized for collective action not against single employers, but against industry decision-makers. A real organizing program requires transformation within locals and absolute commitment to this new direction throughout the union, providing the vision and financial resources necessary to organize to scale. Rather than organizing “anything that moves,” SEIU’s New Strength Unity Program demands that local unions and their leaders rise to the challenge of organizing a movement.