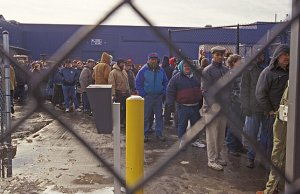 Key to a new organizing strategy is that the UAW to hire and train an “army” of member-organizers. With the recent loss of many experienced members in the Big Three, this could be a good way to put talented union members to work. Photo: Jim West

As the UAW prepares for this summer’s negotiations with the Big Three auto companies, UAW leadership is strangely silent. With the companies seeming poised to demand major concessions, the union cannot afford to look weak.

Silence won’t work, and the UAW cannot hang its hat on the fortunes of the Big Three alone. If the Big Three’s market share is going down, it means it’s increasing for nonunion auto companies like Toyota and Honda. We need to put the industry on notice that where there are auto plants, there will be a union!

GETTING SERIOUS ABOUT ORGANIZING

At the UAW convention in June 2006, the leadership claimed $60 million was going to go for organizing. This was coming out of the UAW’s gigantic $874 million strike fund. Yet it should be noted that the entire amount was placed into the UAW’s general fund and not strictly into the organizing budget.

It looks like the leaders threw those promises out there to keep the delegates happy without considering any serious organizing plans. Last month UAW officials were quoted as saying they have no plans to use the additional money voted for organizing until after negotiations are over with this summer. We are wasting precious time.

One of the issues the UAW wants to deal with in Daimler-Chrysler negotiations is their nonunion plant in Vance, Alabama.

Rather than trying to win those members to the union through an organizing drive, Business Week reported that the union is looking for a neutrality and card check agreement for nonunion Daimler plants. If this comes in exchange for concessions at Chrysler’s union plants, the UAW would be accepting a position of weakness and selling out its members.

There is an alternative to continual concessions, but it requires a major change in the way the UAW functions. The UAW needs a comprehensive organizing strategy for both foreign transplants and auto parts plants. It must organize workers on a scale not seen since the union’s early years.

Key to a new organizing strategy is that the UAW to hire and train an “army” of member-organizers. With the recent loss of many experienced members in the Big Three, this could be a good way to put talented union members to work.

Those who have worked in the plants will have a lot to offer organizing campaigns. However, they will need effective training. Even more than $60 million should be put directly into the organizing budget: $100 million could put more than 1,000 member-organizers into the field!

We should use these organizers to go to UAW locals in the areas where they are organizing and mobilize the working and retired members to help in the organizing effort. Local members should know about the plants in their area that need to be organized. Organizers could head up local union committees and bring leaders from the nonunion plants to address membership meetings.

Members will likely know people working in nonunion plants close by and could give the organizers valuable new contacts. Local union activists may know the leaders of community organizations that could be brought into the organizing campaigns.

GOING ON THE OFFENSIVE

Unions have complained about harassment campaigns organized against pro-union workers at nonunion plants during organizing drives. Systematic fight-backs with mass leafleting need to be organized to defend and highlight each instance of anti-union behavior.

Each time a worker is fired for organizing, the firing should become a “cause celebre.” If UAW organizers establish close relations with Central Labor Councils where they exist, they can bring the entire labor community into support of our organizing campaigns. UAW locals could also hurt a nonunion plant’s standing in the community if they were armed with the details of the plant’s health and safety record.

This would let the nonunion companies know they will face the wrath of the entire community when they engage in such actions.

By launching a wide-scale mobilization now, we would be entering negotiations with a stance that would let the entire auto industry know we will not be cowed down by their strong-armed, bullying tactics.

Wendy Thompson is the retired former president of UAW Local 235 at American Axle and is a delegate to the UAW’s upcoming convention.