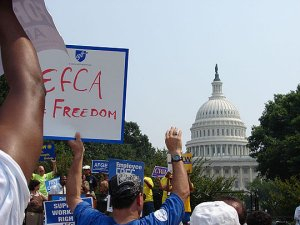 Workers rallied at the Capitol for the Employee Free Choice Act, which would ease organizing. Photo: Change to Win.

Nobody wants to say it on the record, but the buzz is we won’t get the Employee Free Choice Act in its current form.

President Obama says he’s pro-EFCA but wants unions to “accommodate” the other side—despite labor’s $450 million and countless hours of volunteer work devoted to electing him.

Employers aren’t interested in compromise, spending $50 million just on anti-EFCA ads last fall in states where Senate seats were up for grabs, and vowing to spend tens of millions more.

Also in this issue: How Employee Free Choice Act Would Have Helped at Smithfield

In October Bank of America hosted a conference call for executives led by Bernie Marcus, a co-founder of Home Depot. Marcus lectured CEOs to give money to prevent EFCA and “the demise of a civilization.”

A favorite argument against EFCA is that it would deny workers the right to vote on unionization. Union strategists point out that EFCA actually permits either “card check” or a secret ballot—workers would decide which they wanted. Under current law, only the employer can decide.

Another argument is that there’s no precedent, in the private sector, for the right to arbitration of first contracts. And employers moan, like they did in the Depression, that too much unionization would wreck the reeling economy.


What Employee Free Choice Would Do

If a majority of workers in a workplace sign union authorization cards, validated by the NLRB, the company must recognize the union. If a majority of employees call for an election instead, the NLRB will hold one.

Penalties for companies breaking the law are increased.

• Up to $20,000 per violation for willfully or repeatedly violating employees’ rights during organizing drives or bargaining the first contract.

• Triple back pay for workers fired or discriminated against for pro-union activity during a drive.

• The NLRB must seek a federal court injunction when there is reason to believe a company has violated workers’ rights during a drive, such as firing or threatening to fire union supporters. Precedent says an injunction would be issued immediately.

Companies may not drag out first-contract bargaining indefinitely. If the two sides cannot reach a contract within 90 days, either one may request mediation from federal mediators. If mediation doesn’t work, they go to binding arbitration.

Supporters counter that union-won higher wages are exactly what the economy needs. After all, the debt-driven economy has utterly failed.

But in the end, the arguments don’t matter. The bill that passes will reflect the balance of power between business and labor. If EFCA is gutted, or fails to pass at all, it will be because not enough Senators were convinced it was in their interests to vote the right way.

How have labor and other movements in the past persuaded reluctant politicians to vote our way? By creating enough turmoil in the streets that legislators know they’d better do something.

The civil rights movement, the anti-Vietnam war movement, the worker upheavals of the 1930s—all led Washington decision-makers to do things they didn’t want to do.

It’s possible to admire labor’s efforts for two million petition signatures for EFCA and still ask, if this is the fight of a lifetime, why aren’t we acting like it?

Could the energy unions channeled for Obama last fall be reawakened for creative actions in 2009? For a huge march on Washington, for civil disobedience at senators’ offices, for informational picket lines outside the corporations bankrolling the bosses’ campaign, like Home Depot?

Less than three years ago, immigrant workers—most of them not union members—pulled a one-day national strike, bringing more than a million workers, families, students, and supporters into the streets in the largest series of demonstrations our country has ever seen. They were fighting for survival. So is the union movement. This is not the time to be timid.

I admit, I have not been on this webpage in a long time... however it was another joy to see It is such an important topic and ignored by so many, even professionals.

Money spent on anti-worker campaign: To fight the Employee Free Choice Act, the Chamber will spend $20-30 million in the next year.

I agree with those who say that this is the time for direct action. Signing petitions may be nice, and it's certainly easy enough to do via e-mail and the Internet, but I don't think it's nearly enough. I'm disappointed that the International and national unions are not publicly identifying the corporations fighting the passage of the EFCA, as well as identifying the corporations and associations, etc., assisting the entities fighting the passage of the EFCA.

I believe that all of the tens of thousands of union websites should immediately begin listing the names of those referred to in the paragraph above. Then the union websites should immediately notify ALL of their members and follow up with boycotts and informational picketing. The economy is hurting everyone, and I believe that the time to hit those fighting the EFCA in their pocketbooks is long overdue. If, for instance, the BofA is supporting conferences opposed to the EFCA, then why don't those 2,000,000 people who signed the EFCA petitions fight any more bailouts for the BofA? I believe that there's certainly a LOT more that can be done than signing petitions in the comfort of our homes via computers. I think it's time to take it to the streets!

I just followed the link to the AFL-CIO blog you recommended. It's all about petitions, lobbying, and press conferences. It has virtually no direct action, which is what the LN article is (correctly) recommending. This just proves the article's point that the labor bureaucracy is committed to tailing the Democratic party rather than forcing its hand through direct action, which is what built the labor movement in the first place.

As the recent article in the washington monthly noted, I agree that giving up the card check segment of the proposal is NOT the most crucial part- so long as elections are held quickly. Rather, putting teeth into the penalties cannot be diluted if the bill is to be effective. So labor can make a "concession" while still educating and organizing members and the public where to draw the line on changes to the bill. More importantly, in these tough economic times we need to get the sympathy and support of the non-unionized workforce by returning labor to a partnership in the social change forces which potentially can make lasting changes in our economic and social systems.

If EFCA fails, perhaps you should all ask Andy Stern why it has failed. The truth is simply SEIU blew their wad fighting UHW and for what? Exactly what he was fighting to control is slipping through his grips. In just a few days the last largest portion of SEIU-UHW-West, will petition for a vote to leave SEIU-UHW-W. The Kaiser Division of UHW is nearing its goals to petition the NLRB for a vote of decertification. Had Andy Stern not trusteed our local and listened to reason we would have been working hard to devote the energy we did to getting Obama elected to pass EFCA. It is unfortunate that the entire labor movement has to pay for the greed of one pompous ass.

Your statements are well put. There is no Democracy in SEIU!