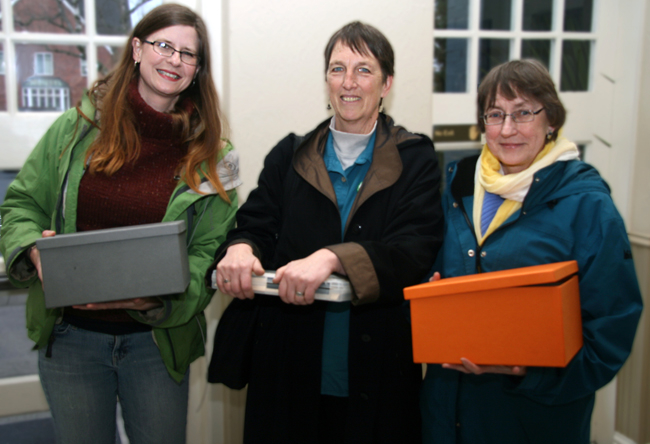 University of Oregon faculty members, tenured and untenured, delivered union authorization cards signed by more than 1,000 of their colleagues to the state Employment Relations Board. They are now certified to bargain. Photo: United Academics.

Myth: Universities are communities of scholars dedicated to increasing knowledge through research, teaching, and community service.

Just as in manufacturing, transportation, and service industries, university managements are speeding up employees and using temps and part-timers—prompting faculty to organize.

At the University of Oregon, United Academics was certified April 27 to represent more than 1,800 professors and researchers. The union represents teaching employees across the board: full-time and part-time, tenure track and non-tenure track, adjunct instructors, research associates and assistants, and post-doctoral scholars.

Tenured faculty have significant job security. Non-tenure track and adjuncts have none. University administrators usually resist faculty uniting into one bargaining unit and try to divide and conquer. At the U of O, union activists were committed to unity and had state law on their side.

UA is a joint affiliate of the Teachers union (AFT) and the University Professors (AAUP), former rivals that have been cooperating informally for many years. The two unions are in the fourth year of a formal agreement to jointly organize research institutions, the flagship universities that confer doctoral degrees, emphasize research, and bring in grants to support that research. Joint campaigns have been successful at the University of Vermont and the University of Alaska.

Craig Smith of AFT’s higher education department considers the Oregon victory especially significant because U of O is “a flagship research institution.” Smith said, “The fact that faculty in research institutions are now pursuing collective bargaining indicates the lack of voice that faculty have.” Highly educated academics always expected to have control over their work, but have found that such things as budgets, resources, staffing, class offerings, and sizes are determined higher up.

U of O faculty members were certainly motivated to organize by low salaries in relation to comparable universities as well as cuts in health care benefits over which they had no say, but growing corporatization was a major factor.

“Academics by definition are people who explicitly chose the lower-paying path because they’re driven by some deeper commitment to intellectual life,“ explained Gordon Lafer, professor of political science and labor education at U of O, “but higher education is being reshaped in ways that threaten to destroy the very values that drew us to academia. It is this, even more than wages and benefits, that lends the union its urgency. Universities are being remade in the image of corporations.”

High-paid university administrators are making decisions based largely on economic considerations. “Academic departments are increasingly being viewed as revenue centers—encouraged to promote big lecture classes and to avoid hard-to-grade writing assignments or other forms of personal attention,” Lafer said. “The decision of which departments grow or shrink is made not on any intellectual or pedagogic basis but as a financial decision. What generates tuition or outside grant dollars grows. Everything else—including traditional liberal arts staples like philosophy or religion—gets cut.”

While universities have never really been the idealistic ivory towers of myth, cuts in state support for public universities have pushed them further toward the corporate model. The National Science Foundation reported early this year that per-student state funding dropped about 20 percent between 2002 and 2010. The state of Oregon currently provides only 9 percent of the university’s revenue—compared to 25 percent in 1990.

The University of Oregon Foundation's spending on student aid is down 24 percent since 2007.

As a result, students are considered customers. The price (tuition) is raised as high as the market will bear. U of O just announced a 5.6 percent increase for next year. Any commitment to a mission to educate smart local working-class kids is giving way to attracting higher-paying students from out of state or abroad, who pay three times as much.

“For faculty,” Lafer said, “corporatization means the wholesale replacement of tenure-track faculty with part-time, adjunct, and temporary instructors.” Nationally, he said, 70 percent of all teaching hours are now performed by “contingent” teachers.

“There has been a dramatic increase in students and a decline in resources for instruction,” she said, noting that the number of students majoring in her department has doubled, yet only one tenure-track position has been added.

“The administration is using non-tenure track teachers routinely now,” she said. “They used to use temps only to substitute for absences. Some departments hire at 0.49 percent of full-time to keep them under the line for benefits.”

Cramer said some classes have gotten so large that students are sitting in the aisles. “They’re mad, and they should be,” she said. “A world-class university should focus on academics.”

As state funding declines, the influence of big donors, who are usually corporate executives, grows. They push for the universities to adopt business management practices. And big-time athletics also bring a corporate ethos into universities. Coaches earn huge salaries, resources are directed to building fancy athletic venues, and universities are marketed for TV packages and corporate sponsorships.

Union activist Tina Boscha has been teaching English composition since 2003 on short-term contracts with no job security. She makes much less money than unionized teachers at the local community college. Her salary only recently topped $30,000. An instructor at Lane Community College, after the same amount of time served, would make at least $64,000. While she and other non-tenure track teachers likely have the most to gain with a union contract, she believes all faculty share the same interests. “This effort is not just for non-tenure track—it’s across the board,” she said.

UA’s organizing drive was carried out under Oregon’s public sector labor law, which provides for card-check certification if a majority requests representation. The bargaining unit is the largest group to organize under card check since the law was enacted in 2007.

While declaring neutrality, the administration paid a union-avoidance consultant $25,000 for a “factual” website that echoed all the typical anti-union arguments against “outside third parties.” Once the cards were submitted, administrators filed objections to the description of the bargaining unit, which would have gutted the union. But under pressure from Governor John Kitzhaber, who won a narrow victory in the 2010 election with strong labor support, management withdrew the objections.

United Academics is holding meetings in the departments to develop proposals and build support. A membership drive is planned and negotiations for a contract will begin in the fall.