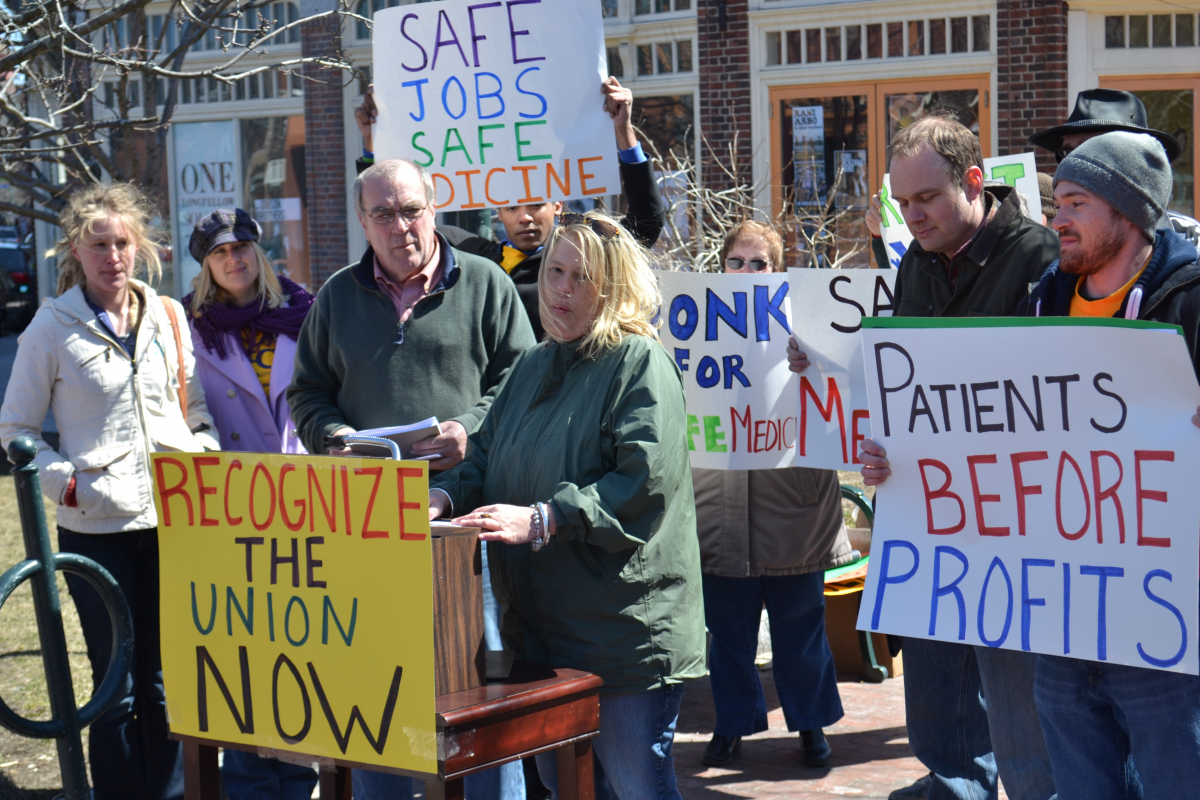 A majority of workers at Wellness Connection of Maine want a union, but their employer is resisting. They spoke out in April on hazardous working conditions and illegal use of pesticides. Photo: UFCW.

If you were looking for an easy place to organize workers, it probably wouldn’t be at small retail outfits. The work is unstable and the boss is in your face.

But the Food and Commercial Workers union has been signing up thousands of members at small nonprofits that grow and sell medical marijuana. Seven states now allow medical cannabis dispensaries.

“It’s a struggle getting to all the places where workers want to join the union,” said Dan Rush, director of the union’s Medical Cannabis and Hemp Division.

That’s a problem most organizers don’t face, but the medical marijuana industry is full of surprises.

Medical marijuana is now legal in 17 states and D.C., and the number is expected to grow. Patients and caregivers say cannabis alleviates symptoms from cancer, AIDS, glaucoma, and various other diseases and disorders that cause pain.

Close to a million patients now receive medical marijuana legally under state laws, according to Steph Sherer of Americans for Safe Access, a patient group that works closely with the union.

But according to the federal government, every one of the estimated 2,000 existing dispensaries is dealing illegal drugs, and all their patients are criminals. The U.S. Food and Drug Administration says marijuana has no legitimate medical use.

As a result, the Drug Enforcement Administration has been raiding and threatening landlords and proprietors with criminal charges, fines, and confiscation. An estimated 600 dispensaries were closed, mostly in California, between October 2011 and October 2012.

According to some reports, the UFCW lost half its cannabis industry membership as a result. And this spring is bringing a new round of raids, say industry watchers.

Paradoxically, the legal pressure has made owners less resistant to the union. Dispensary owners want to increase their legitimacy in the eyes of law enforcement, politicians, and the public, and unionization helps.

The owners are “focused on stabilizing the industry,” said Rush. “That takes a lot of the contentiousness away.”

Many employers got into the business as patient advocates and have braved decades of political battles over medical marijuana. They think of the union as an ally in their fight, and in general allow their workers to have a union if a majority sign up.

All current UFCW cannabis workers were organized that way, not through Labor Board elections, said the union’s Marc Goumbri.

However, in Maine, where there have been no raids, workers who met resistance from their employer have been picketing, building community support, and other familiar steps to unionization.

Health and safety is first on their list of concerns. They experienced an epidemic of respiratory problems from fungus on the plants they tend.

They also worried about the health of patients, when their employer, Wellness Connection of Maine, used pesticides that violated new state regulations.

If workers had more say, said Thomaston dispensary worker Susan Gay, “there wouldn’t have been a need for workers to call in 23 tips to state regulators to stop Wellness Connection from using pesticides on the medicine we provide.”

Just having a union helps prevent bad practices, said UFCW organizers, as workers encourage their small employers to be sustainable, stable, and law-abiding. Pay and benefits are not the main reason medical cannabis workers want to unionize, said organizers.

“I feel safer with the union around,” Ayrn Taylor, an employee at the Venice Beach Care Center told Reuters.

Many arrests later, California voters passed the Compassionate Use Act in 1996, which protects patients and caregivers from state prosecution. Later, provision was made for nonprofit storefront dispensaries and growing operations.

Industry-watchers agree that despite federal law, the industry will expand and employ more workers—as many as 100,000 in California alone, UFCW estimates.

And two states—Colorado and Washington—recently legalized marijuana for adult recreational use and are now considering how to regulate its sale.

The UFCW supports full legalization, and seeks to represent workers in the marijuana stores that will result. In Colorado, the union organized hundreds of precinct-walkers to knock on doors and volunteers made thousands of calls to support the legalization initiative.

While supporting legalization, the union favors regulation of cannabis. When Prohibition ended in 1933, the nation saw an explosion of state-by-state regulation of alcohol, and some of it helped workers in the industry.

In Pennsylvania, for example, all wine and liquor stores are state-owned, with the workers state employees. This has turned out to be a union-friendly model, with the clerks members of UFCW.

Naturally, that kind of regulation is unpopular among private competitors, and Pennsylvania wine and liquor clerks have been fighting to keep the legislature from selling off their stores.

Liquor stores in neighboring states don’t provide benefits or family-supporting jobs, they point out. And profit-making vendors, they argue, would have an incentive to sell to underage customers or otherwise skirt the law.

The same arguments echo as states develop regulations for cannabis. UFCW generally favors state and local regulations that will professionalize growing and dispensing operations, and encourage high-road employers who will follow state law.

The union also supports taxing medical marijuana like alcohol and tobacco. Taxes can create political support from communities that need the revenue.

Changing state law to legalize medical cannabis can seem like the easy part, said Sherer. “Implementation can take years, decades, even,” she said.

As states set up regulations, they come to the union for help. Rush said he’s consulted with states and municipalities on how to identify high-road dispensary proposals, most recently in Connecticut.

It’s been a while since unions were regularly consulted on regulating their industries, but in the “sunrise industry” of medical marijuana, lawmakers are looking for any expertise they can find.

In some cases, the regulations supported by the union seem quite strict. In Los Angeles, where a motley assortment of 500 to 1,000 dispensaries operates, the union, the city council, and established dispensaries campaigned for a referendum to limit the number of dispensaries to 135 (including all the unionized ones), slightly increase the local tax on sales, and institute employee background checks. It passed May 21 with 63 percent of the vote.

The union’s goal is to make the jobs stable and the whole industry less vulnerable to legal attack and objections from the public. The state's Supreme Court recently ruled that municipalities can ban dispensaries outright. Without further regulation, some in the industry feared that L.A. may have gone that route.

Los Angeles “is an island unto itself,” said Sherer. Some dispensaries there are clearly taking advantage of the Compassionate Use Act, advertising that they can diagnose a disease and sell you marijuana for it in 30 minutes or less. Some illegally operate for profit.

But in most places, dispensaries are mom-and-pop operations that started because of a commitment to patient care, said organizers.

To further professionalize the industry—and establish the union’s role more firmly—UFCW is planning an apprenticeship program for cannabis workers, Rush said, similar to those for its meatcutters and produce workers. The crop itself is finicky, like white asparagus or fancy mushrooms, and takes expertise to raise. Dispensary workers would also be trained through the program.

Although the Obama administration had said it would not crack down on medical marijuana use, federal raids have continued. Targets seem to be random. Unlike their practice with immigration raids, the feds haven’t targeted shops that are organizing with UFCW, union organizers said, but having a union hasn’t protected them, either.

Dispensary owners and their landlords—including 11 in Seattle in early May—are threatened with criminal charges and forfeiture of their real estate.

Jenny Brown was a co-editor of Labor Notes.jenny@labornotes.org
Related
Viewpoint: The NLRB is Underfunded and Understaffed—And That’s a Big Threat to the Current Organizing Wave »
Review: On the Line: A Story of Class, Solidarity, and Two Women’s Epic Fight to Build a Union »
Steward's Corner: How to Think Like an Organizer »
Inside the Alabama Amazon Union Drive: An Interview with the Lead Organizer »
Draw the Line in Permanent Marker: Three Organizing Principles »