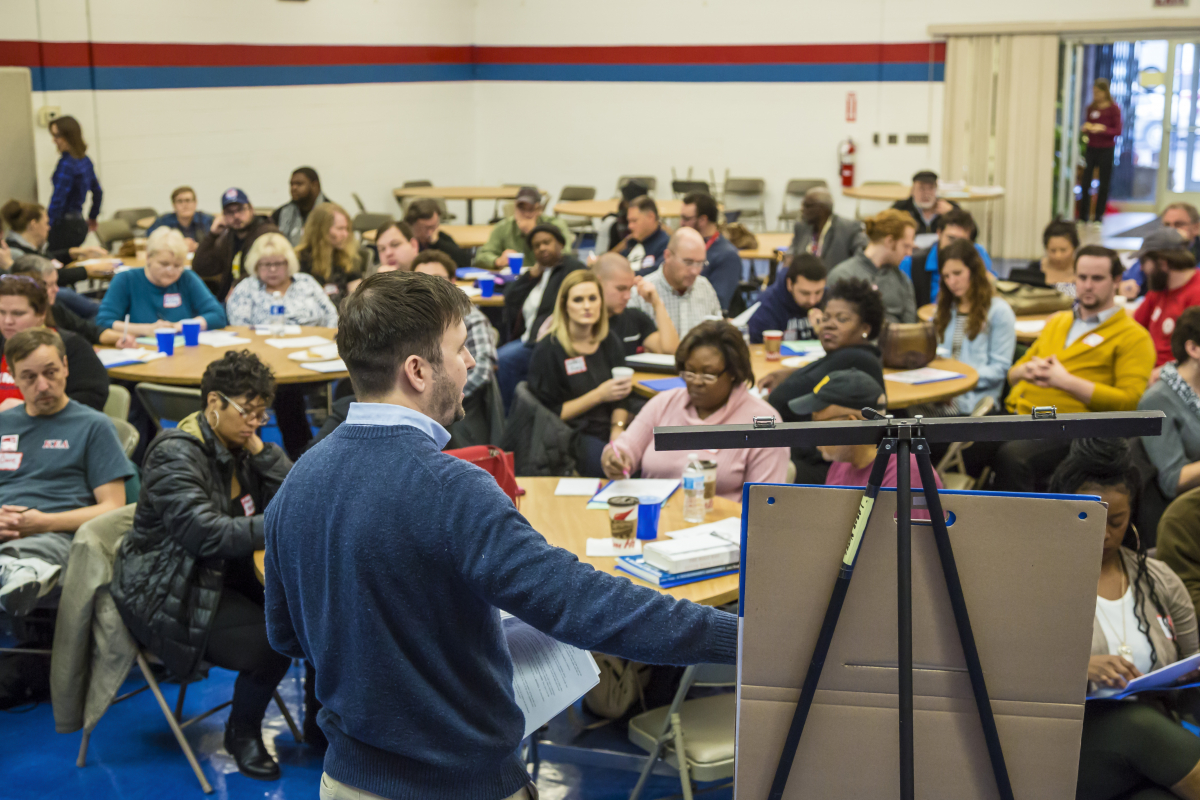 Chris led a workshop on the Secrets of a Successful Organizer with teachers, newspaper workers, nurses, and auto workers at the Detroit Troublemakers School in 2016. Photos: Jim West, jimwestphoto.com

Goodbyes are the worst. Labor Notes writer-organizer Chris Brooks is leaving our staff this month to become the mobilization director for the New York NewsGuild.

Chris joined the staff in 2016, in the run-up to that year’s conference. His first day in the office, as I recall, he helped proof the final manuscript of Secrets of a Successful Organizer. Then he plunged right into devising a system to schedule hundreds of volunteers into jobs and shifts.

With a combination of creativity and ambition, Chris has improved and expanded Labor Notes’ work in many ways. He co-authored the training curriculum that has brought Secrets of a Successful Organizer to life for thousands of rank-and-file workers. It was his idea to create a special issue of the magazine, “Rebuilding Power in Open-Shop America”—and then another one, “How to Strike and Win.”

Long before the pandemic, he got us started sponsoring monthly webinars so Labor Notes readers could see and hear from the protagonists of important union fights. He helped nurses around the country form a rank-and-file network to support one another’s organizing—and not a moment too soon! Last summer, he flew to Taiwan and led workshops at our first-ever Asia regional conference.

On the auto workers beat, Chris’s reporting and organizing have fed one another. No other outlet matched the depth of his coverage of the long fight to organize the Volkswagen plant in his hometown of Chattanooga. And while the mainstream press covered the United Auto Workers corruption scandal as dirty linen, Chris always kept his eye on the solution: democracy. He’s been working closely with auto workers in a reform movement in their union.

Most recently, always looking for new challenges, Chris set about becoming an expert on the coronavirus and what could and should have been done to stop it. His articles, like “The Hammer and the Dance: Why Reopening Now Will Kill,” circulated far beyond the labor movement.

But Labor Notes’ loss is the NewsGuild’s gain. New York is the union’s largest local, representing 3,000 journalists at such outlets as the New York Times, the New Yorker, People, and Time. It’s been a driving force behind a recent flurry of new-organizing wins. Nationally, journalism is in crisis, but the journalists’ union has the wind in its sails: bursting with new energy, new members, a new president, and bold ideas. We wish Chris all the best—and we assure our readers that you’ll still see his byline in our pages!