The Danger We're Facing: A Grocery Worker Speaks Out 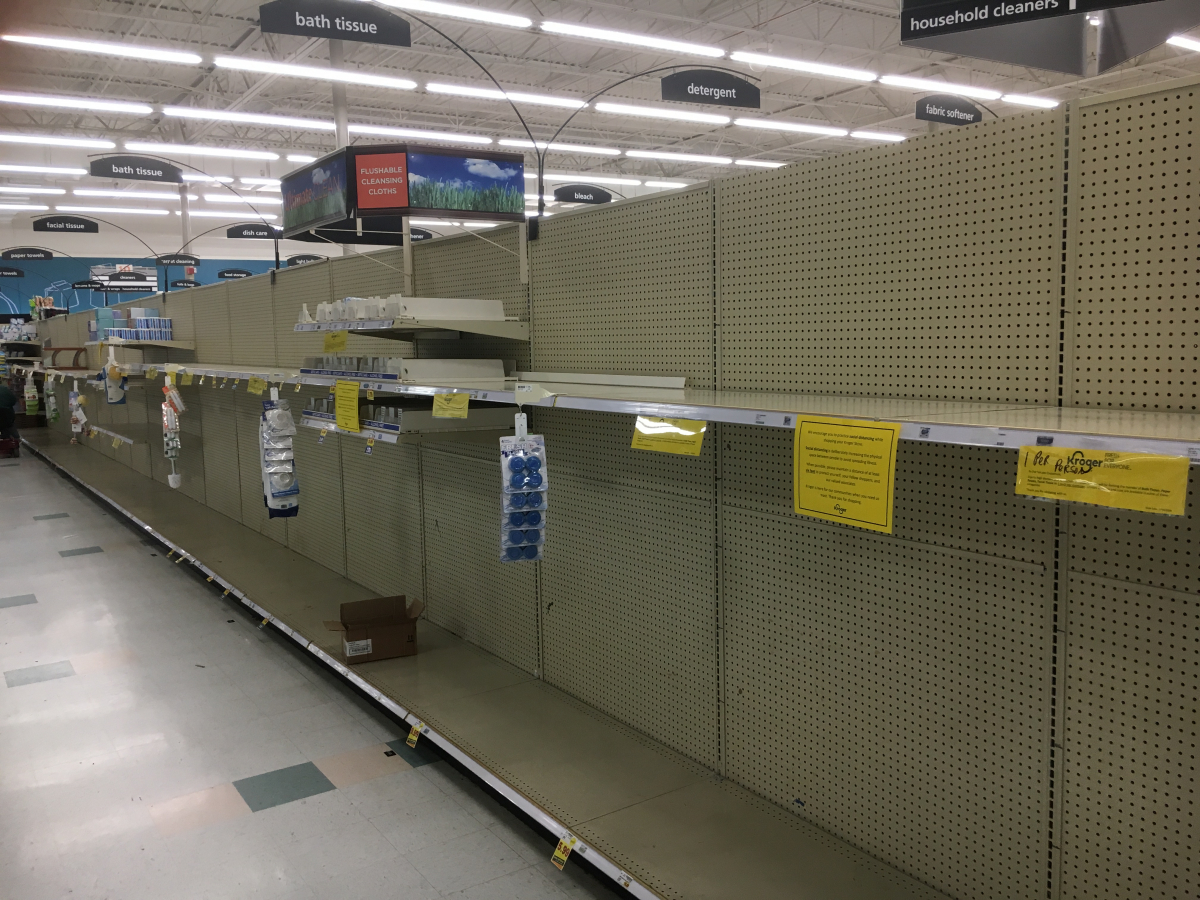 While many businesses are having employees work from home or are closing down to mitigate the spread of the virus, grocery stores have been designated a “critical industry” by federal agencies. This means they can largely continue with business like normal—and normal was bad enough.

Grocery chains have long embraced a lean production model, with stores reliant on ever-smaller numbers of predominantly part-time workers who stock shelves with a constant stream of just-in-time inventory that isn’t warehoused but moves to the floor and then out the door as quickly as it arrives.

The lean retail model has left overburdened workers vulnerable to exposure to the virus, and left store shelves empty as companies struggle to keep up with increased demand for products like hand sanitizer and toilet paper.

To learn more about what life is like right now on one of the many frontlines of the global pandemic, Labor Notes writer Chris Brooks spoke with Travis Boothe, a pharmacy technician and Food and Commercial Workers Local 400 steward at a Kroger store in West Virginia.

Labor Notes: What have the past few weeks been like for you?

Travis Boothe: My store is seeing record sales, our sales are up 200 to 250 percent from what it was for that week in years prior. In the pharmacy, where I work, our staff has been overwhelmed this whole week. We can’t keep up with the demand. We operate on a very lean model. It’s a skeleton crew. Our pharmacy is just entirely bogged down.

We could barely work effectively before the crisis. Now we are seeing how the lean retail model of running stores by pushing the smallest number of mostly part-time workers to do as much work as possible just becomes totally dysfunctional in a crisis. Most people in our store were part-time before the crisis, now there is an infinite supply of overtime because they don’t want to hire full-time employees.

Things have changed really quickly. Two weeks ago, nobody was panicking then because people were in denial. Nobody thought much was going to come of the virus. They were making jokes. And now I see a lot of panicked faces. People are terrified. Some coworkers are wearing masks and gloves, but that is not the norm because management is not providing them. Nobody is following CDC guidelines for social distancing or washing your hands frequently, like after you cough or handle money. We are exposed to floods of people at the cash registers. I think we are going to be hit hard by the virus. On top of that, there are shortages on all kinds of products and I expect that is a problem that will only get worse.

Before now, it was hard to get people involved in the union and talking about collective action. Now everyone is scared and everyone wants hazard pay, protective gear, they want to change safety protocols. We are starting to develop collective demands around health and safety.

LN: What kinds of demands? What would be helpful right now?

TB: People need to be paid an actual hazard pay premium. UFCW members at Safeway are receiving $2 an hour in premium pay right now, Giant is giving a 10 percent pay increase, and Shoppers Food is paying $2 an hour more plus double time for all overtime and Sunday shifts. Kroger is raking in the money right now and refuses to even consider anything like that. Instead, they have offered every full-time employee a one-time bonus of $300 and every part-time employee a $150 bonus. That is what they think our health is worth. It’s beyond insulting.

Management is way behind the ball on safety procedures, so workers need to be more in control of that. We see issues on the ground every day and we should be empowered to actively find ways to limit needless social interactions and exposure.

In the pharmacy, a coworker of mine suggested closing the front of the pharmacy and only handling prescriptions at a walk-up window, which would limit the number of people employees can interact with at a given time and create more distance between the employees and the customers. Management denied this simple plan.

We would also like to refuse to take cash and go to a card-only check-out. We are being told that the virus can last on surfaces for lengths of time. By handling cash, which is in constant circulation, we are significantly increasing the risk of exposure.

There is no mandatory social distancing in line when people are checking out. They are right on top of each other. We also need to limit the number of customers in the store at any time. People are hoarding goods, it’s obvious to see, so we should limit the number of certain products that people can buy to ensure more people have enough. None of that is even being considered by management in my store right now.

The company also needs to provide us with Personal Protective Equipment. Some employees come in contact with hundreds and hundreds of people in our stores. Because we can’t wash our hands or disinfect surfaces or have proper equipment, every time someone checks out, they aren’t just being exposed to one cashier, they’re being exposed to everyone that cashier has been exposed to.

LN: If management isn’t going to listen, then how is any of that going to happen?

TB: It’s going to take workers coming together to demand what is necessary, confronting these companies and forcing them to do what is necessary to take care of workers and the public. This is an opportunity for everyone who works in essential industries to be active in confronting the spread of the virus from the bottom-up. That starts with organizing. We have to organize, organize, organize. We can’t let anybody downplay or belittle our demand to be treated respectfully and with dignity. We know our jobs are essential. We want to go to work, but we want to make sure that we are safe and that the public is safe while we are there.

Workers organizing for health and safety in this moment literally means we are confronting capitalism, because we are saying the health of workers and the public is more important than profits. We ran out of hand sanitizer and soap in our stores, but they kept the stores open and running. Kroger is raking in dough while we suffer and subject ourselves to possible sickness and death.

LN: How has your union responded in this moment?

TB: My union is handling the situation the best they can, but there is no precedent for what retail workers are facing right now. That’s why it’s up the rank and file to lead the way on this.

In these circumstances, the workers can’t be afraid to put their foot down. We hold all the power, we can make demands and refuse to compromise until our demands are met.

I see disaster coming at us. People can’t keep this up. The model of how we are running these grocery stores is not sustainable. People are working back to back ten- to twelve-hour shifts. There is no rest. It’s only a matter of time before people reach their breaking point. And everyone is worried about bringing the virus home to their families. At some point, the risk will just be too high and the pay too low. So we will see a lot of people refusing to go to work.

We have to organize that anger, fear, and frustration into collective action.