Scenes from the L.A. Teachers Strike

It’s day four of the Los Angeles teachers strike, and the big news is that the district and the union will meet today at noon to resume negotiations for the first time since the strike began. Mayor Eric Garcetti, who has been urging the district to come back to the table, will mediate. 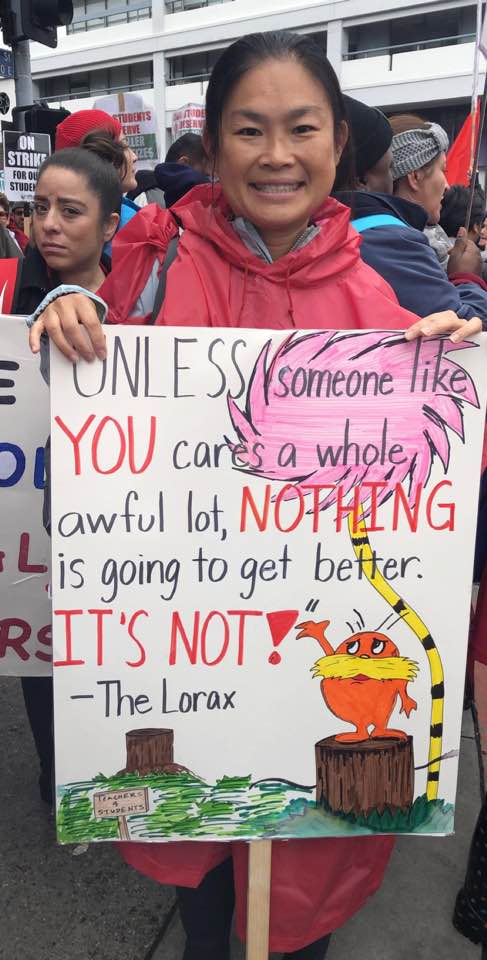 Teachers and their supporters have been busy this week—picketing, rallying, chanting, dancing, and singing for better pay, smaller class sizes, more counselors and nurses, and fewer charter schools.

Despite the rain, morning picketing at the schools was followed again by big rallies yesterday, marking the third consecutive day of mass protest. Monday and Tuesday saw big citywide rallies; on Wednesday, teachers fanned out for six area rallies across the city.

Four Labor Notes staffers are on the ground helping out with the strike. Here’s a little taste of what they've seen and heard over the last three days.

For more, check out:

“If you see any of the aerial pictures, we’re pretty much shutting downtown L.A. for the teachers, for the students, for our communities. It’s pretty much jaw-dropping and we’re doing it in a downpour and there’s still 50,000 people out there for our students,” said Franklin High School teacher Mark Ramos.

WHY WE’RE OUT HERE

“I’m here because I support Black and Brown students in our schools,” said community member Angela James. “The very thought that our children should be educated in classrooms of 40 students or more—any time they can have policing at schools and not have counselors is completely absurd.”

English teacher Kimba Barney, who teaches 9th and 10th graders, said she wasn’t given a projector and had to buy one herself. “We’re coming out of our own pocket to supply these schools,” she said.

Eighteen-year-old Elijah McIver of University High School is thinking about the next generation. “I want to make sure that for my kids in the future, and also my nephews and nieces and little cousins who are coming up in school,” he said, “I want to make sure they have everything they need to be successful in life.”

At the top of his list is smaller class sizes; he also mentioned newer textbooks and access to computers at school: “It’s just the little things, really.” 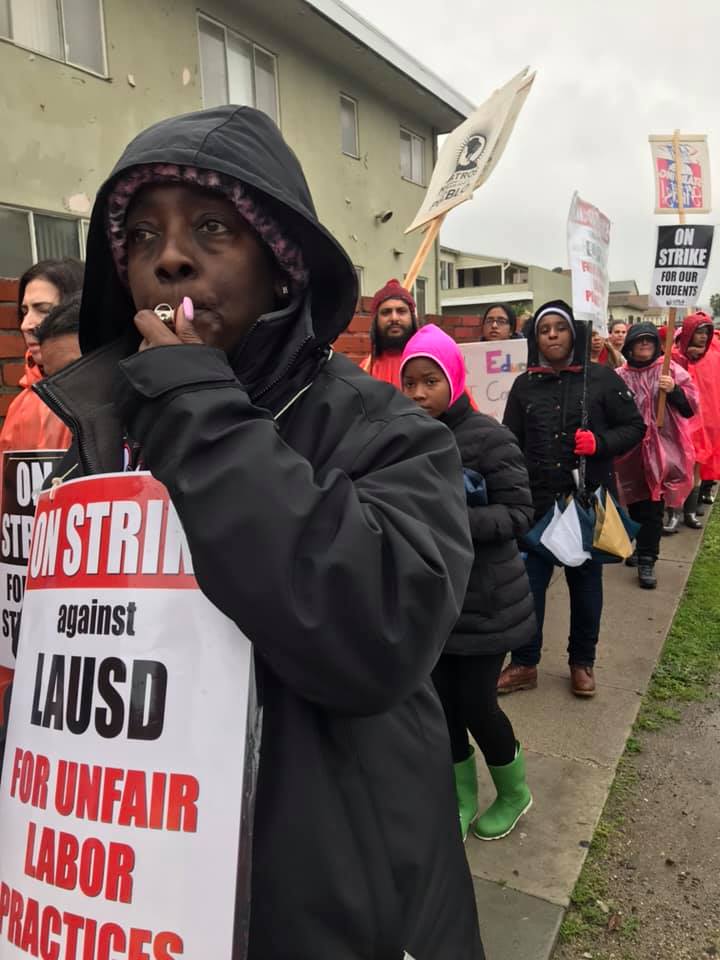 Some students are still attending school during the strike, but most aren’t. On day one, half the students reportedly showed up at University High, and they left early. Far fewer showed up the next day.

The report from Westchester High on Tuesday was that only 40 out of 900 students were in attendance. All were being put in computer labs to do online work. At other schools we heard students were just watching movies, and miserable.

Overall, even the school district reported as of Tuesday that only one-third of students were in school. And strikers were skeptical of those numbers—one mom at Dorsey High said her son had been marked present when he was actually outside picketing!

So far, an overwhelming majority of teachers are showing up to picket duty every day. Very few have crossed the lines. 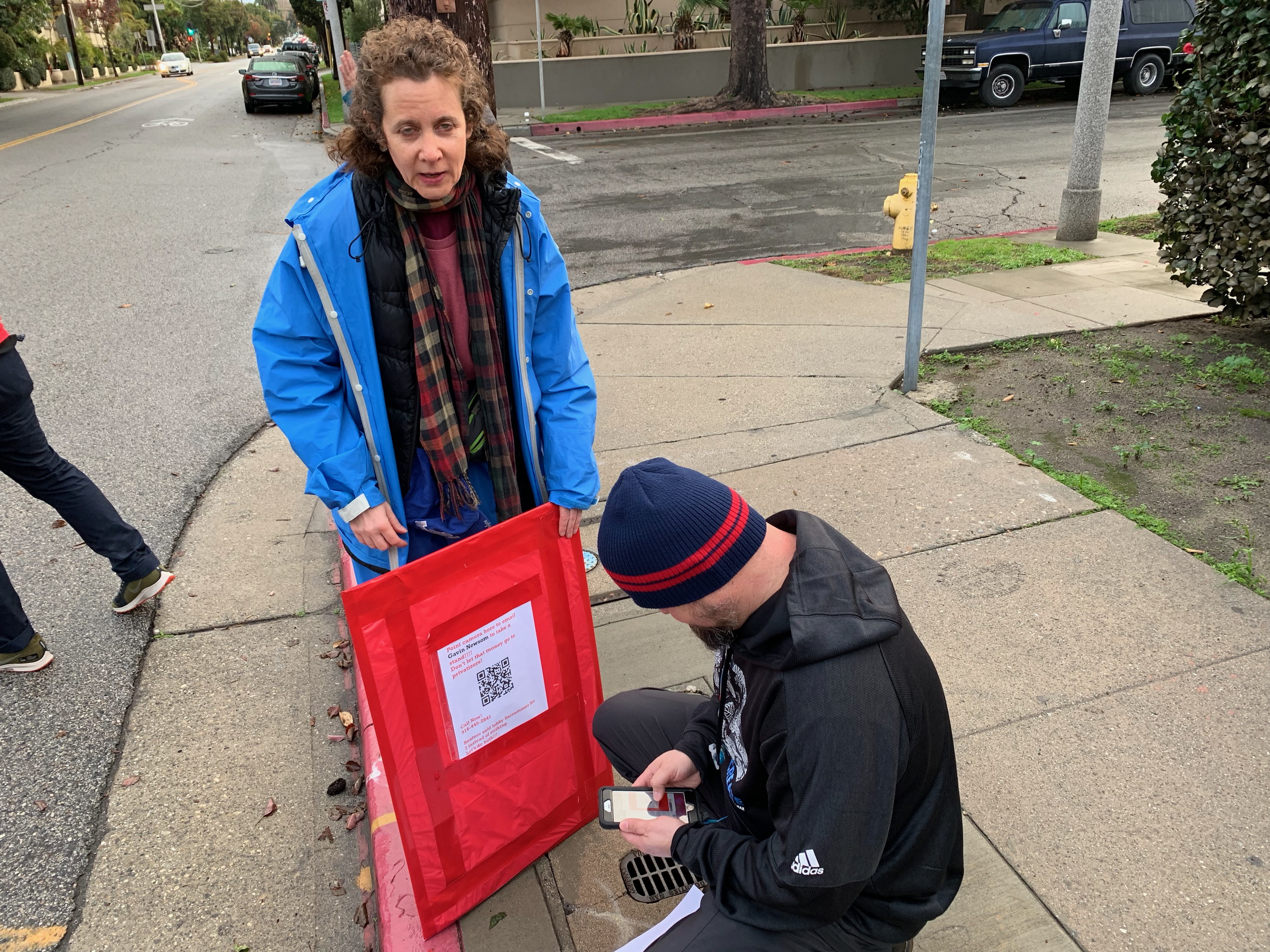 Tascha Folsoi, a librarian at University High who has taught in the district since 1999, created a poster with a QR code that she is using to get parents to send messages to California Governor Gavin Newsom. 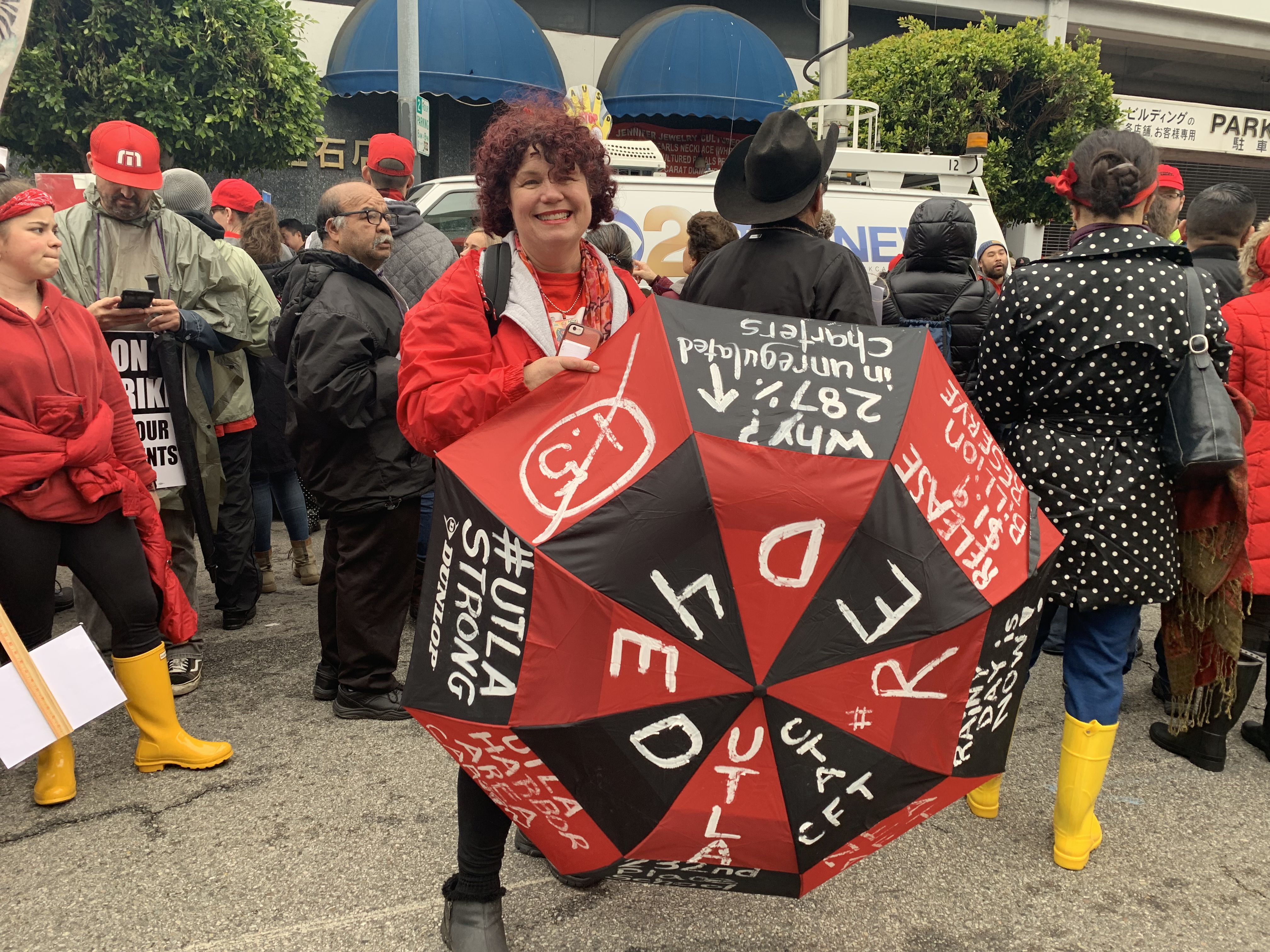 Undaunted by the rain, 25-year first grade teacher Stacey Michaels of 232nd Place Elementary School in Carson decorated an umbrella instead of a picket sign.

Some teachers beat the rain by laminating their picket signs.

Others were handing around laminated song sheets. James Adams of Uni High and Sean Longstreet of Westside Global Awareness Magnet cleverly rewrote well-known songs to focus on the strike. For instance, the Beatles’ “With a Little Help from My Friends”:

What would you do if I walked out of school
Would you stand up and walk out with me?
Lend me your ears and I’ll sing you a song
About saving LAUSD!

“Striking is hard,” reports Chris Brooks. “It’s raining every day. Folks are going without pay. They miss their students. But there is also SO. MUCH. JOY.”

That joy shines through in strikers belting out “Don’t Stop Believing,” “R.E.S.P.E.C.T.,” and “Strike Strike Baby,” and a brass band playing “Baby Shark.”

Here are just a handful of the many, many strike-line dance parties we’ve caught on video:

And don't miss the amazing performance by a 12th grader and a 10th grader at the end of this video from a rally at Dorsey High today, captured by Bianca Cunningham:

As Roosevelt High teacher Gillian Russom put it: “A 30,000-person dance party in front of the California charter schools association is not a bad day.”

Labor Notes staffers Chris Brooks, Bianca Cunningham, Barbara Madeloni, and Samantha Winslow are in Los Angeles helping out with the strike and contributed reporting to this article.