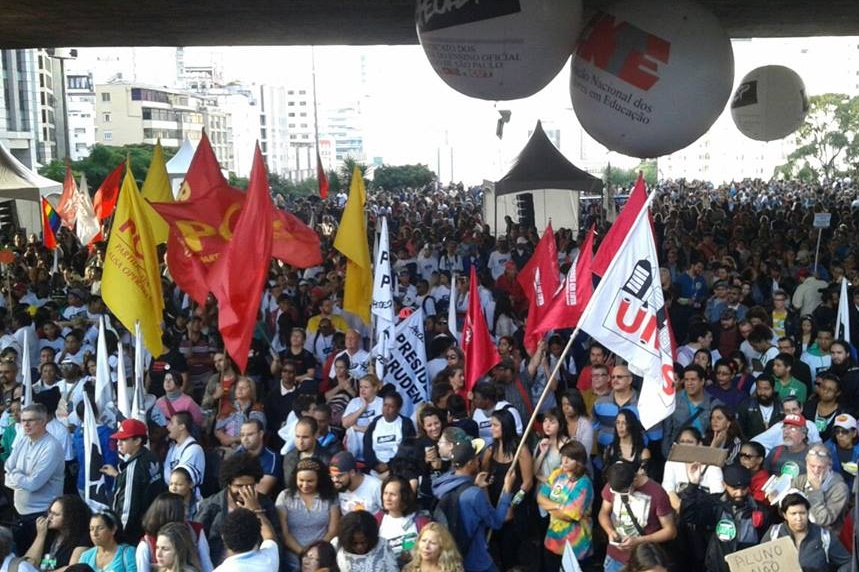 Thousands of teachers in the Brazilian state of São Paulo voted on May 15 to continue their now two-month strike. Photo: CUT, São Paulo.

Thousands of teachers in the Brazilian state of São Paulo voted on May 15 to continue their now two-month strike.

“We are lacking very basic things…like water to drink or paper to write on,” said Glovis, a high school teacher in São Paulo. In negotiations, “the government is not proposing anything concrete.”

At an open-air assembly on the plaza next to the São Paulo Art Museum, vendors mingled, selling food and beer. Giant sound trucks occupied an entire lane on busy Paulista Avenue. The crowd swelled, soon spilling onto the street and blocking traffic both ways on a major thoroughfare.

Every Friday the teachers hold these assemblies to discuss how the strike is going and vote on whether to continue it. Regular votes by assemblies are part of the Brazilian labor tradition, and are often the lifeblood of a strike. Picketing is both legally difficult and not a traditional tactic.

The governor is a major adversary of São Paulo’s social movements. He has gone on the attack against unions and community organizations, and refuses to invest in badly needed improvements to transportation and water infrastructure

Teachers in at least 10 states went on strike in March, at the beginning of the Brazilian school year. They are demanding smaller classes, adequate infrastructure for students, and increased pay for teachers.

The issues vary from state to state—for example, in Parana, teachers are striking to protect their retirement funds.

While the strike has been peaceful in most parts of the country, Parana police attacked demonstrators on April 30, injuring more than 200 teachers with rubber bullets, truncheons, and tear gas.

For two months, teachers in the city of São Paulo have maintained an encampment in front of the Department of Education. The union, APEOESP (Official Teachers Association in the State of São Paulo), has taped up sample paychecks testifying to the teachers’ low pay.

Poverty wages force many teachers to work second jobs as tutors in private schools after their workdays in the public schools. Most public schools in Brazil only run for a half-day.

Besides low salaries, Flavia, a high school teacher, told me that “there are teachers that are contracted out, and their jobs are very precarious. They don’t have any rights, and do not receive any salary increases.”

Steve Payne is a graduate student at the University of Memphis, a member of United Campus Workers (CWA), and a former organizer with the Service Employees in Minneapolis.