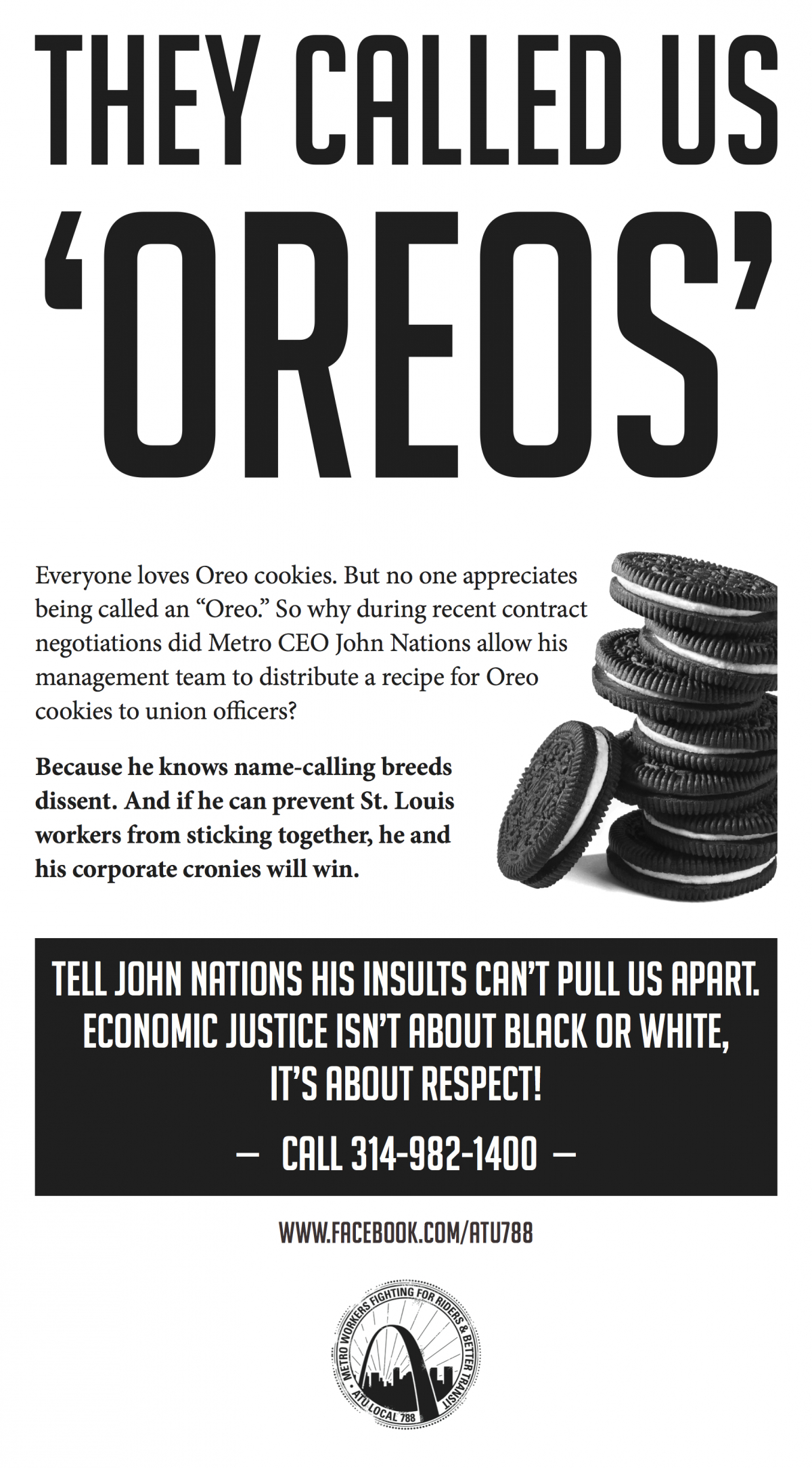 St. Louis bus union ATU Local 788 fought back against race-baiting by the transit authorities by leafleting riders, picketing, and placing ads like this one. Today they're voting on a tentative agreement; tomorrow they're rallying in front of the employer's headquarters. Source: ATU Local 788.

Update: Members approved the contract in a Thursday vote.

Bus workers in Amalgamated Transit Union Local 788 are celebrating a tentative agreement after they called management on outrageous racism.

The workers, who serve St. Louis, including Ferguson, have been trying for over three years to get a new contract with Metro, the bi-state agency that runs the buses. The union said the new contract preserves workers’ defined benefit pension plan, increases wages, and improves health care coverage.

Part of the reason the contract took so long, said ATU President Larry Hanley before the agreement, was that “the company is populated by racial arsonists.

“They have economic goals for the agency, and the linchpin of economic goals these days is to strip the workers of pensions and wages,” Hanley explained in early September. “The method that the agency has chosen to use is to separate workers by race and category.”

Most of the drivers are Black, and most of the mechanics are white. So “officials of the agency have been privately negotiating with the mechanics to get them to leave the ATU, telling them they can get them more,” said Hanley. “In other words, ‘If you aren’t part of that Black bus drivers union, we’re going to take care of you.’”

The real motive, of course, was to separate workers into smaller groups so they wouldn’t have the power to stand up to management’s cuts. But management’s strategy was failing, so they stepped it up.

In July management came into bargaining, “and they say, ‘We have a gift for the bargaining committee,’ and they hand each one of them the recipe for Oreo cookies,” recalled Hanley.

The union responded with demonstrations, radio spots, and newspaper ads. When workers leafleted riders at transit centers, Metro tried to ban their leafleting on employer property. Members turned up the heat by demonstrating at the residence of Metro’s CEO, John Nations.

“Securing the agreement is a victory, but it doesn’t resolve the pain and outrage that the Oreo incident caused. This issue must be addressed,” said Local President Mike Breihan. The union has asked Missouri Governor Jay Nixon and Illinois Governor Pat Quinn to remove Nations as head of the bi-state agency.

“After all our community has been through in the last month, we will not accept behavior like this,” Breihan said. “We will be calling on the Metro Board and elected officials to address this immediately.” The local is holding a "Rally for Respect" outside Metro headquarters on Friday.

The agency is covered under federal transit law, not the NLRA, so there’s nowhere to file an unfair labor practice. “If there were, we would have had a pile of charges, based on their behavior,” said Hanley.