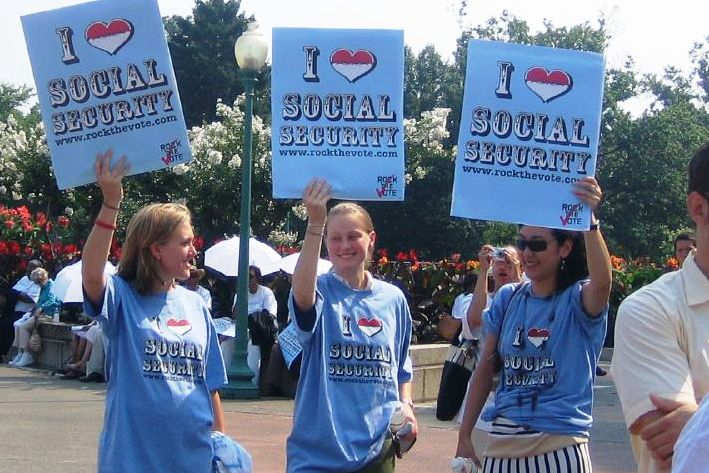 My mother just turned 78, and it was an occasion for both of us to reflect on what a great program Social Security is.

Despite a 20-year career in a technical field, her pension is diddly-squat. It doesn’t adjust for inflation, and several years ago the plan stopped covering the drug gap left by Medicare. However, thanks to Social Security, she’s financially independent. Savings can run out, but Social Security will be there however long she lives.

That’s cause for me to celebrate, too. This is what those trying to drum up a war between the generations don’t want us to understand.

They claim Social Security won’t be there for younger folks when we retire (true only if the privatizers get their way)—but carefully avoid mentioning that Social Security is there for us now, supporting our parents.

I’m an only child. Without Social Security, my mother would be dependent on me. I’d have to find a second job—or hit the pavement for something more lucrative and less meaningful than Labor Notes.

What about the generation after me—dubbed “Generation F*@%d” due to the horrible job market—who are working low-wage jobs and only avoiding homelessness by staying in their parents’ spare room? They’re benefiting too. Without Social Security, Grandma and Grandpa would be in the spare room, and they’d be on the couch.

That doesn’t even count the crucial support Social Security provides for children who lose a parent, and the disabled.

It’s failed again and again, but the idea lives on, zombie-like. New York Times op-ed liberal Frank Bruni fretted in June that Social Security, Medicare, and Medicaid will take up 14.3 percent of GDP by the year 2038 (they account for 10 percent now).

There’s just no money for the young, he worried. The federal budget will increasingly be taken up by expenditures that he imagines help only Big Old.

Of course, these budget items only stand out because the rest of government is being slashed to the marrow to provide tax cuts and subsidies for millionaires and billionaires.

One way to secure Social Security is to make it better. The retirement age is too high, and for lots of retirees, the check is not enough for a decent existence.

We could start by taxing the whole paychecks of the overpaid, instead of, as the law stands now, just the first $117,000. You and I and our employers together pay 12.4 percent of our income in Social Security taxes. Because of the $117,000 cap, someone pulling down $500,000 a year pays only 2.9 percent.

Another way to strengthen Social Security is to raise the minimum wage.

It’s not news that of all the income in the U.S., the portion paid in wages has been going down, while profits accruing to the already-super-rich have been going up. But wages are the only part of the economy that get taxed for Social Security, while profits and stock dividends don’t.

Raise the minimum to $15, and you’ll not only make a lot of crappy jobs more livable—you’ll also increase the portion of economic output going to Social Security, and decrease the portion going to the owners of McDonald’s and Walmart.

More for the workers, more for retirees, less for the owners, for a truly cross-generational win.

“Slingshot” is a column where Labor Notes staffers take aim at issues of the day.

Jenny Brown was a co-editor of Labor Notes.jenny@labornotes.org
Related
Will the Stimulus Stop States From Slashing More Jobs? »
Why Did California's Tax the Rich Measure Lose? »
Ballot Measures: Mixed Results for Workers »
Soak the Rich, Now More Than Ever »
Economics Brief: The Rise in Income Inequality in the United States »