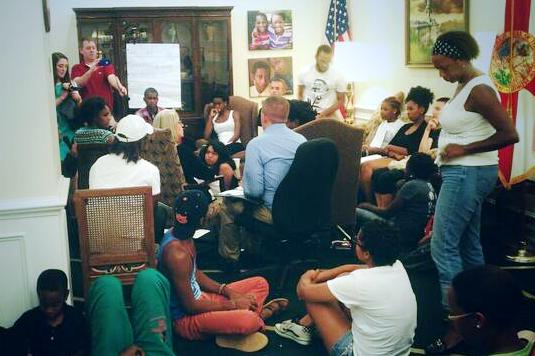 Florida youth activists supported by SEIU and other groups are in day nine of a sit-in at the governor's office, calling for a special legislative session to tackle the "Stand Your Ground" law, racial profiling, and the school-to-prison pipeline. Photo: Dream Defenders via Twitter.

Watch your mailbox: Labor Notes #413, August 2013, hits the presses tonight (and if you're not yet a subscriber, there's an easy fix). Here's a sneak peak at this month's Newswatch column:

Feel like there’s a hole in your pocket? Real wages fell 3 percent 2009-2012—even though productivity grew, says the National Employment Law Project. Wages dropped more for many in low-wage jobs, including cooks and food prep workers, home health and personal care aides, and housekeepers. Sounds like time to raise the minimum wage. Make it $10.10 and 6 million will exit poverty, reports Restaurant Opportunities Centers United. (And that won’t break the bank: a $12 minimum would cost the average Walmart shopper just 46 cents a trip, CUNY and UC Berkeley researchers have calculated.)

So what’s the hold-up? Corporations, of course. Take Alaska Airlines and the Washington Restaurant Association, suing to keep a $15 minimum for Seattle-Tacoma airport workers off the local ballot. Or take billionaire Charles Koch, who says we should help “the disadvantaged” by “clearing out” regulations like the minimum wage. He’s starting a media campaign. Take him—please!

Direct action gets the AC. Workers at a McDonald’s in New York and a Dunkin’ Donuts in Chicago went on impromptu strikes over soaring temperatures July 19. By day’s end store owners had brought in a portable air conditioner in New York and industrial fans in Chicago.

Ronald McDonald also took flak this month for offering employees helpful budgeting advice (get a second job and stop paying for food, heat, or clothing). And the company had to quit insisting on issuing its paychecks in the form of debit cards that charged a bank fee every time you withdrew cash, checked your balance, or paid a bill online.

After the explosion of a train carrying tar sands oil killed at least 42 people in Quebec, the CEO blamed the train’s engineer, claiming he didn't set the brakes right when he parked it overnight. But railroad workers say the ghastly incident reflects concerns they've been raising over company policies—including single-person crews, skimping on maintenance, and whether it’s safe to transport tar sands oil at all.

AFSCME has joined the NAACP in calling on the Justice Department to bring federal civil rights charges against George Zimmerman, who stalked and killed teenager Trayvon Martin. At press time, a group of young activists called the Dream Defenders (supported by SEIU and other groups) were nine days into a sit-in at the Florida governor’s office, demanding a special legislative session to tackle the “Stand Your Ground” law, racial profiling, and the school-to-prison pipeline.

UNITE HERE announced a deal to end the four-year boycott against the Hyatt hotel empire (assuming workers vote up the contract). The chain agreed to long-awaited raises as well as what the union calls “a fair process” for recognizing unions at several yet-to-be-organized hotels. That likely means management drops its opposition to unionization and cooperates with speedy elections. Such agreements have become the preferred method of new organizing for several unions—but next term the Supreme Court will weigh whether they are lawful.

Can the boss fire a female employee because he finds her irresistible? Iowa’s Supreme Court recently held that a dental assistant—fired because her “distracting” appearance was “a big threat” to her boss’s marriage—did not have a claim for sex discrimination. “While the loss of a job is often devastating to an employee, and at times unfair,” the court said, “these considerations do not play a role under our employment-at-will doctrine.” If she’d had a union, her firing would violate the “just cause” provision of the contract. It’s more evidence we need just-cause legislation protecting all workers.

Striking beer workers in St. John’s, Canada, called a national boycott of Labatt’s imports, including Stella Artois, Becks, and Lowenbrau. (Labatt is part of the Anheuser-Busch InBev company.) The 50 have been striking since April—after the boss asked them to train their replacements. Labatt has put up a new fence to keep strikers out (and scabs in?) and hired goons to tail them around the city with a video camera. Sign their petition at bit.ly/LabattBoycott and find a list of union-made beers at bit.ly/UnionBeers.

Detroit became the largest U.S. city to declare bankruptcy July 18, and the city’s “emergency manager” made it clear that cutting city workers’ pensions and “improving services” (i.e., privatization) were the goals. Other ailing cities will doubtless look to Detroit as a template. Can it really be this easy to get rid of decades of promises made?

And now you know. Why not subscribe and get your guaranteed dose of Labor Notes every month, straight from the hands of a union letter carrier?

Alexandra Bradbury is editor and co-director of Labor Notes.al@labornotes.org
Related
Inside the Alabama Amazon Union Drive: An Interview with the Lead Organizer »
How We Turned Bargaining Around at Law360 »
China: Leader of Delivery Riders Alliance Detained, Solidarity Movement Repressed »
The BAmazon Loss and the Road Ahead »
Massachusetts Nurses Face Down For-Profit Health Care Giant Tenet in Daring Strike »