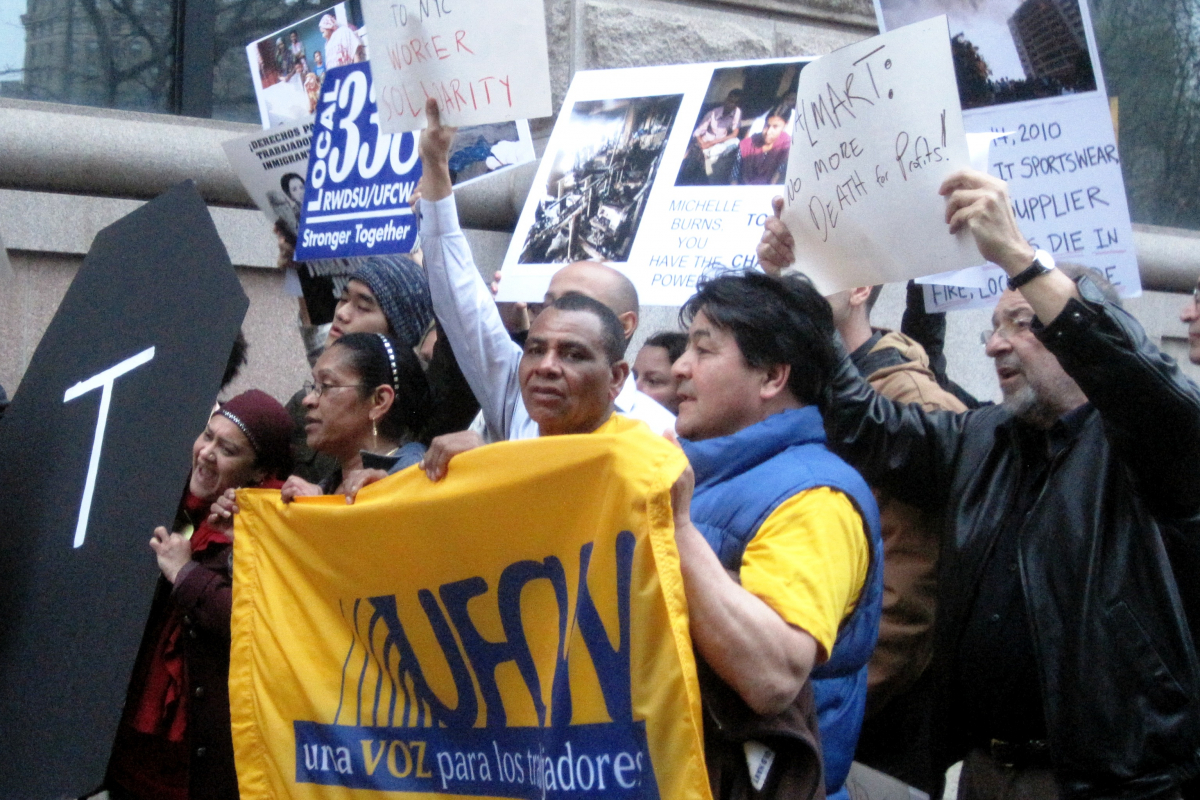 Workers all along Walmart's supply chain, from factory to store, marched to Walmart board member Michele Burns' residence in downtown Manhattan April 18 with a letter asking for compensation for the Tazreen fire victims and demanding that Walmart sign a fire-safety agreement with Bangladeshi unions. Photo: Jenny Brown.

Walmart has cut store staffing so severely that in some cases workers have no time to stock shelves, and the few remaining checkers face customers who’ve been waiting in line for 30 minutes.

They gathered to remember 112 garment workers who died in the Tazreen Fashion factory fire near Dhaka, Bangladesh, last November. About 100 marched to the house of Walmart board member Michele Burns with a letter asking for compensation for the victims and demanding that Walmart sign a fire-safety agreement with Bangladeshi unions.

Police and building security prevented delivery of the letter, so workers, including Sumi Abedin, a young survivor of the fire, stood outside in the dusk, reading the names of the dead and holding a series of long, black, coffin-shaped signs that spelled W-A-L-M-A-R-T.

A saxophone rang with sorrow, which became defiance when it was joined by brass and drums from the Rude Mechanical Orchestra, a popular New York protest band.

Among the crowd were workers from all along Walmart’s supply chain: factory workers, warehouse workers, truck drivers, retail workers. During a pre-march panel they compared experiences and sought ways to cooperate against the retail behemoth.

Of course, it’s not just Walmart—but Walmart leads the pack, said Bernardo Encarnación, who works at a New York factory that prepares food for sale at the retailer. “Walmart squeezes the company, and the company squeezes me,” he said.

Production at his workplace has quadrupled in the past 14 years, but staffing has not kept pace, said Encarnación, who operates a machine that cuts chicken. “We are constantly harassed to produce more.”

He said mandatory overtime causes injuries as tired workers struggle to complete long shifts. Encarnación is a member of the United Food and Commercial Workers, which is also helping organize Walmart retail workers.

“We’re the ones working and putting money into the Walton family,” said 13-year store worker Aubretia Edick from Granby, Massachusetts. “But we’re sleeping in cars and at friends’ houses.” Edick is a member of OUR Walmart, the retail workers group that led short strikes last fall over working conditions and wages. This week, members of the group plan to confront store managers over short hours that leave them destitute.

The heirs to the Walton fortune collectively control more wealth than the bottom 42 percent of U.S. households put together.

Reynalda Cruz, who works for a pill manufacturing plant in New Jersey that supplies Walmart, said that not only is her work heavy labor, but dust from the pills fills the air, giving her and her co-workers skin lesions, nosebleeds, and swollen eyes. The dust aggravated the asthma of one co-worker, who asked to be moved to a less-dusty job. Not long after management refused, she had a heart attack, said Cruz.

Fear in the plant is such that, when the woman fell, her co-workers were scared to call an ambulance, afraid that management would fire them, said Cruz. “Walmart doesn’t take responsibility for the things that are happening,” she said. “But they make millions off of us.”

Port trucker Gonzalo Chirino said he was fired when he attended a Teamsters organizing meeting. Chirino drives goods from a New Jersey port to Walmart warehouses. The Teamsters’ Port Division is trying to organize 100,000 port truckers around the country, and helped get Chirino his job back. His employer also deducted money for workers compensation insurance, but didn’t allow workers to use it. They were able to stop that practice.

In her plant, “management told us what to say when the inspectors came,” she said. When workers complained about blocked exits, managers said, “‘There will be no problem. If there is an accident, we’ll take care of it.’”

In a calm but forceful tone, Abedin described what happened when fire broke out at the eight-story factory. First, a worker ran down the stairs yelling that there was smoke, but managers told them it was nothing and they must keep working. A few minutes later, they smelled smoke themselves and panicked, running down the stairs only to find a locked gate. Trying another stairway, they found fire.

The electricity went out, so they were in total darkness. Many were trampled on the stairs in the panic, Abedin said. Finally some workers broke through a ventilation grate, allowing a few to jump out of the building from the second story.

Abedin didn’t think she’d survive the fall. But she thought, “At least my parents can find my body,” which she feared would otherwise be unrecognizable from the fire. She broke an arm and a leg and lost consciousness.

Her family had to borrow money from neighbors to get medical care for her. “The factory owner and the government are responsible, but Walmart is also responsible,” she said.

Walmart was one of several customers of Tazreen Fashion. The company initially denied it bought clothes from Tazreen, but when its exclusive brands were found among the factory’s ruins, Walmart said it was cutting ties.

Worker activists say Walmart is the largest buyer in Bangladesh, and Bangladesh, with over 4,000 factories, is now the world’s second-largest source of clothing, after China.

Because of its size, Walmart dictates prices. “This factory is a product of that strategy that Walmart invites, supports, and perpetuates,” Workers Rights Consortium director Scott Nova

Abedin received $1,200, most of which went to medical treatment. Doctors told her she could not work for a year, due to smoke inhalation and broken bones. Minimum wage is $37 a month in the garment industry.

The Bangladeshi garment workers union, which marched in Dhaka in solidarity with Walmart store workers’ strikes last year, is pushing for unbiased fire inspections. They accuse inspectors--from garment buyers and the government--of overlooking violations and cooperating with management.

The union has already secured an agreement from Phillips-Van Heusen, which owns Tommy Hilfiger and Calvin Klein. Factories the company buys from must have neutral inspections and public reports, and the brand will pay for upgrades to increase fire safety. The union is aiming to get Walmart’s signature on a similar agreement.

Workers’ strategy at the forum aimed mostly at uniting more workers, inside and outside Walmart, to shame the company and dent its brand. But last year’s strikes at warehouses in Illinois and California, as well as day-long strikes at retail stores, have demonstrated that worker power can be exerted where Walmart makes its money, not just in the public arena.

Bangladeshi Walmart workers continue their tour this week with stops in Seattle, Olympia, and Renton, Washington and San Francisco on April 25..