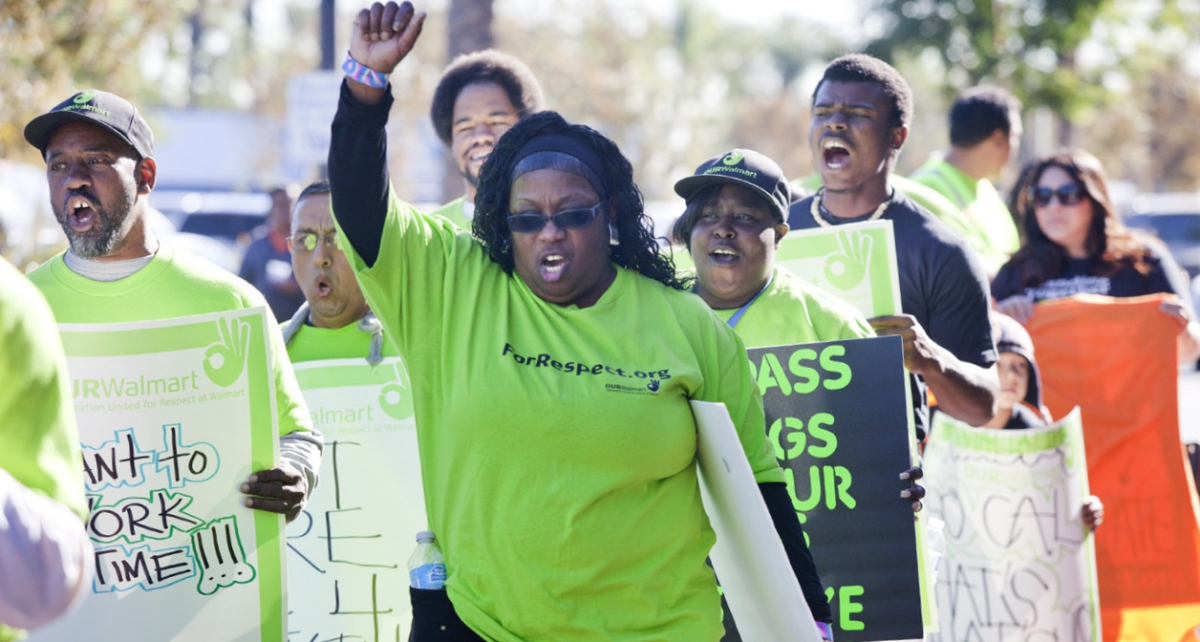 Walmart workers struck in November 2013. The Labor Board has ruled that this strike and three others before it constituted intermittent strikes, which are not legally protected, and therefore the company can get away with firing strikers. Photo: UFCW

A recent decision by the Trump National Labor Relations Board (NLRB) addresses intermittent or “hit-and-run” strikes. Employers are jubilant and unions are distressed. Both reactions are largely off the mark.

The case grew out of a multi-year campaign by the Food and Commercial Workers (UFCW) to organize Walmart, the largest U.S. employer (1.5 million workers in 4,000 locations). The effort began in 2010 under the name “OUR Walmart.”

A few months after the third set of walkouts, the company told participants that it considered their absences to be part of a plan to damage the company and that federal labor law does not protect intermittent strikes.

Three months later, workers again walked out at several stores. This time, the company discharged 14 employees and disciplined 40 others for “unexcused absences.” Many had only engaged in a single walkout.

OUR Walmart quickly filed NLRB charges contending that the company had disciplined the workers for peaceful strikes, covered by Section 7 of the National Labor Relations Act, which protects “concerted activity for mutual aid” by both union and nonunion employees.

The case was tried before an NLRB judge. In 2016 the judge ruled against Walmart, ordering it to reinstate the fired workers, pay back wages, and clear employee records. The company appealed this decision to the full NLRB in Washington, D.C.

In July 2019 the Board ruled 2-1 in favor of Walmart. It found that the walkouts were intermittent strikes because they were part of a “plan to strike, return to work, and strike again, repeatedly.”

The issue of whether a series of walkouts constitutes an intermittent strike has bedeviled the NLRB for more than 70 years. Some Board decisions favor unions, others find for employers. The decisions usually weigh several factors, including the number and length of the walkouts, the intervening time periods, and the nature and consistency of the demands made by the union.

But the Trump-dominated Board skipped over the usual weighing process. Why? Because the union, for unexplained reasons, stipulated at the start of the hearing:

In the Board’s eyes, this stipulation destroyed the union’s case. The Board called it “direct evidence” of a “strategy to use a series of strikes in support of the same goal.”

Contrary to some accounts, the Walmart decision does not ban unions from carrying out multiple walkouts. The last paragraph of the decision plainly states: “We are certainly not suggesting that employees who go on strike cannot go on strike again based on even the same demands as the first.”

A union may still call a “practice” or “warning” strike, return to work, see if the employer comes around and, days or weeks later, strike for an indefinite period.

A union may also call separate walkouts having distinct origins and demands. For example, a union conducting a contract campaign could strike against a unilateral change in working conditions, an arbitrary discharge, a refusal to provide information, and a safety hazard. (Unions subject to no-strike clauses must wait until the contract expires.)

As long as no statements, admissions, records, or other evidence tie the strikes together as part of an organized campaign, and the union carefully safeguards the separate identities of the walkouts, workers should have legal protection against employer retaliation.

Robert Schwartz is a retired union attorney and author of No Contract, No Peace: A Legal Guide to Contract Campaigns, Strikes and Lockouts, available at labornotes.org/store.

Related
Comics Against the 1%: Silent Night »
On Intermittent Strikes, Labor Board's Top Attorney Cites Labor Notes »
Review: What Chinese Workers Are Learning from Their Strikes »
'Superstore' Is the Realest Retail Sitcom Yet »
In China, Walmart Retail Workers Walk Out over Unfair Scheduling »