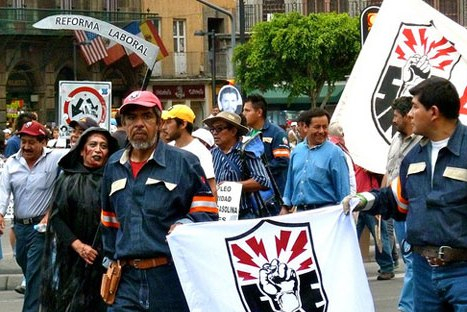 The Mexican Congress is set to pass labor law “reform” this week that will be devastating for millions of workers’ legal rights and incomes. Here members of the independent electrical utility workers’ union (SME) demonstrate against the law. Photo: SME.

The Mexican Congress looks set to pass a piece of fast-track labor law “reform” this week that could be devastating for millions of workers’ legal rights and incomes.

The changes both pro-business parties are agreed on would undermine the 44-hour work week by permitting subcontracting and temporary or part-time work for the first time.

Additional changes that would make it virtually impossible to organize or maintain genuine unions or to strike were part of the legislation introduced September 1, but it appears that some of those changes may be withdrawn under pressure.

The head of the Institutional Revolutionary Party (PRI) delegation in the lower house just announced that his party will pass a bill this week, but specified that it would not affect the right to strike or union autonomy.

Mexico’s unions almost universally opposed the changes, though different unions did so for very different reasons. The package being pushed by both outgoing President Felipe Calderón of the National Action Party (PAN) and incoming President Enrique Peña Nieto of the PRI terrified both the official Congress of Labor and the independent National Union of Workers (UNT).

Throughout more than five years of the Calderón administration, Mexican unions succeeded in blocking conservative labor law reform. The question is how much of the package they can stop now, in the final stage of the last year of his term.

With the PRI and the PAN together sharing a majority in Congress, more assaults from Peña Nieto are inevitable.

Benedicto Martínez Orozco, co-president of the Authentic Labor Front (FAT) and a UNT leader, said that the bill was “intended to flexibilize the world of work, to make the workers’ wages even more precarious, and to close the door to independent and democratic unions.”

The UNT, which brings together several of the country’s more independent unions, called for demonstrations. On Friday, a march through the capital that included university workers, telephone workers, electrical utility workers, and dissident locals within the teachers was reported at more than 10,000, filling the streets and snarling traffic.

Yesterday, 4,000 workers from the independent union at the Nissan factory in Cuernavaca marched through the streets in their red company uniforms and white caps. In Guadalajara, Mexico’s second-largest city, UNT and public employee unions announced a “megamobilization” for tomorrow. Large demonstrations can also be expected in Mexico City as Congress deliberates and votes.

Opposing the bill within Congress are several left parties. Andrés Manuel López Obrador, who received nearly a third of the vote for president in July on the Party of the Democratic Revolution ticket, said, “Now they don’t want to pay a minimum wage of 60 pesos [about $5] for eight hours; they want to pay 30 pesos for four hours, which isn’t even carfare.”

The Trinational Solidarity Alliance, which brings together many of the largest federations and unions in Canada, Mexico, and the United States, said that the new law would harm worker rights and collective bargaining while leaving the real problems of government-aligned unions untouched.

Over the past few days, U.S. unions, federations, and organizations including the AFL-CIO have condemned the labor law overhaul, saying it slashes worker protections and violates international law. Ten U.S. Congress members asked Secretary of State Hillary Clinton to address the situation.

By far the largest group of unions in Mexico is that historically dependent on the government, the “official” unions. A smaller and struggling group is made up of independent unions that chart their own course.

The official unions have longtime ties to the PRI, which ran the government for 70 years, and are often “ghost unions,” unknown to the workers they represent.

To protect employers from genuine unions, the official unions often collaborate with management to create “protection contracts” that contain only the legal minimums. Independent unions attempt to organize genuine unions and to bargain but face constant challenges from the labor authorities and the employers and repression from the army, police, and gangsters hired by the official unions.

According to the US Labor Education in the Americas Project, about 90 percent of union contracts in Mexico are negotiated with company-funded unions. “Independent unions can wait up to 10 years to be legally recognized by the government while employer-backed protection unions are normally recognized almost immediately,” the NGO says.

The official unions liked the parts of the labor-law bill that would protect them from challenges by independents, but they opposed the legislation because it would also require financial transparency about union dues, income, and assets. This would reveal that some unions exist only on paper while others, awash in graft, receive enormous government subsidies of dubious legality.

The Mexican Petroleum Workers Union, for example, would have to reveal the millions of dollars in government contracts and other government funds that it receives, and perhaps also its contributions to political candidates, the subject of several probes in the last decade.

Joaquín Gamboa Pascoe, head of the official Congress of Labor, suggested that the incoming president, Peña Nieto, should remember that he was elected with the support of 4 million organized union workers and that “they would like to continue being his friend.”

The proposed changes had their origins in plans first hatched by the Mexican Employers Association back in the 1980s. Their goal was to strengthen employers against the unions, particularly the independent unions.

In a process comparable to U.S. union representation elections, Mexican unions may file for an election to take over responsibility for the existing contract (a process called titularidad). Most independent unions have their origin in those challenges to the official unions and their phony contracts. According to labor lawyer Arturo Alcalde, the proposed changes would make such challenges virtually impossible, since the new union would have to notify the company and practically ask it for permission to change unions.

But the most onerous aspect of the law is a requirement that workers who want to change unions must sign a statement stating so and present it to management. Employers typically fire and blacklist those who try to organize independent unions.

It is currently illegal in Mexico to hire workers temporarily or part-time, or to contract out their jobs, though it happens frequently.

Mexico has between 14 and 28 million people working in the informal economy as street vendors and in small shops, restaurants, and garment sweatshops. Thus out of a total working population of 51 million, between 28 and 55 percent of all workers already have no labor law protection at all. Even in the formal economy many employers evade the law in non-union workplaces and even in some unionized ones.

Opponents have said the 30-day fast track the labor law is hurtling down may violate the Mexican constitution or existing laws. An opposition lawmaker was more blunt. “This is a bill strictly for the bosses,” he said.

Related
The Hows, Whys, and Whats of ULP Strikes »
We Can't Just Keep Saying 'Pass the PRO Act.' We Have to Organize. »
A New Union, At Last? Mexican Auto Parts Workers Get to Vote, Three Years After Strike Wave »
In a Landslide Victory, Mexican GM Workers Vote In an Independent Union »
Mexican Auto Workers to Choose New Union in Landmark Vote »