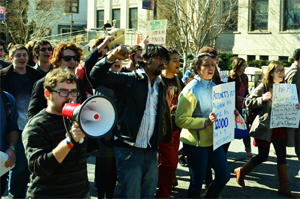 Adjunct professors at American University in Washington, D.C., won a union last month, but not before two years of organizing made it possible. Photo: Katie Figenbaum.

Adjunct professors at American University in Washington, D.C., won a union last month, but not before two years of organizing made it possible.

The campaign started as adjuncts met in each other’s homes and slowly grew to encompass rallies, marches, and flashmobs from supportive students.

Adjuncts are a notoriously transient workforce, shuttling between many campuses to pull together enough classes to make a living. The vote came in 379-284, however, a victory for professors who have been struggling with low pay, no benefits, and no job security. Many adjuncts are paid as little as $2,000 per course.

University administrators had sent anti-union memos to faculty and students, but in a surprising move, agreed to recognize the union and not challenge the election results.

AU administrators had fought shuttle bus drivers in 2007 who won a union with the Teamsters, and in 1996, operating engineers failed in their bid to organize after the university put on a serious intimidation campaign.

Leaders in the new union suspect that administrators did not expect such a big margin. When faced with a healthy majority and strong student support, administrators were forced to acknowledge the deep dissatisfaction. It was a cold dose of reality for administrators who crow about the “campus community.”

The adjuncts’ decision to join Service Employees Local 500 makes them the third school around the district to join the local. George Washington University adjuncts signed up in 2005 and adjuncts at Montgomery College in 2008.

While many colleges, especially public institutions, find themselves in a financial bind, American does not. AU is a private school with about 6,500 undergraduates and 5,000 graduate students. It is most widely known for its School of International Studies and School of Public Policy and its student body is usually ranked highly by the Princeton Review as “politically active.”

The university budget for fiscal year 2012 projects a roughly 15 percent growth in expenditures. Salaries for part-time faculty make up less than 2 percent of the budget. Pay for the five highest-paid administration figures, however, has soared in the last five years, to near $3 million combined. Full-time tenured professors make up to $150,000 a year.

As negotiations draw closer, said Anne McLeer, research director for Local 500 and herself a former adjunct, adjuncts are looking for “improved rates of pay, access to benefits, to fair evaluations, to job security, and protections against unfair and capricious discipline or dismissal.”

Adjuncts across the country face similar difficulties. A 2010 study on the conditions faced by part-time faculty at two-year and four-year institutions, published by the Teachers union (AFT), reported that only 28 percent of adjuncts receive health benefits through their colleges and a third are paid less than $2,500 per course. Almost half say they make less than $15,000 annually from teaching.

A plurality say they would like to teach at one institution full-time but cannot find a position. More than half rely on teaching alone for their income.

The AFT study says unionized faculty are in a far better situation than their non-union counterparts, enjoying less concern about compensation, a greater likelihood of having health insurance, and better access to employer-funded retirement plans.

American’s adjuncts face more than bread-and-butter problems. They are roughly half the teaching population, with upwards of 500 adjuncts in classrooms each semester, but many feel isolated from the university community. Erik Cooke, in the Philosophy and Religion Department, said adjuncts “often feel very marginal to the conversation.” Part-timers have had, until recently, no place in the faculty senate or any other university governance structures.

Having no job security, prospects for promotion, or living wage has “detrimental effects on academic freedom itself, the ability to do research, the creation of the next generation of scholars, and the production of knowledge in our society,” McLeer says.

Adjunct professors are starting to coordinate to challenge their precarious status through organizations such as the New Faculty Majority and the Coalition of Contingent Academic Labor. The Modern Language Association, an international association of teachers and professors of the humanities, has long been known as the arbiter of proper footnotes and the bane of English students. The MLA has now begun to champion the cause of adjuncts, recommending minimum pay of $6,800 per course.

The conditions adjuncts face result from the university’s unique role as both the employer and producer of adjunct professors. Years ago, the majority of adjuncts were professionals who taught on the side, a short-term arrangement where teaching was not their primary income. But with full-time, tenure-track positions at colleges and universities increasingly rare, many newly minted PhDs are going straight from graduate school to teaching as an adjunct.

Cooke sees adjuncts used by universities to “undermine the situation of tenure-track colleagues” and “pad the bottom-line of university administrators” by providing an ample pool of low-cost, highly qualified knowledge workers.

McLeer said that by voting to unionize, “American University adjuncts are now joining the many adjunct and contingent faculties across the country who are refusing to allow themselves to be treated as a second tier.”

Ethan Miller is an undergraduate at American University and an organizer with the Student Worker Alliance, an affiliate of United Students Against Sweatshops.

Related
Southern Service Workers Launch a New Union »
Nine For-Profit Nursing Homes Pull A Simultaneous Strike—And Another Is on the Way »
Viewpoint: The NLRB is Underfunded and Understaffed—And That’s a Big Threat to the Current Organizing Wave »
Review: On the Line: A Story of Class, Solidarity, and Two Women’s Epic Fight to Build a Union »
How Student Workers at Grinnell College Are Winning a Wall-to-Wall Union »