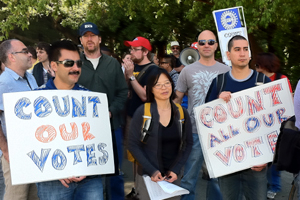 When incumbent leaders of the graduate student union at the University of California stopped the vote count, fearing they'd lose, members of a reform caucus responded yesterday with sit-downs at union headquarters. Photo: Chris Schildt.

Update! This afternoon the UAW Local 2865 election committee agreed to resume the vote count on Thursday, with a neutral mediator in attendance and safeguards for a fair count. Members of the reform caucus say they will continue their sit-in through the count.

Afraid you might lose the vote? Stop the count and run. That’s what incumbent leaders did in United Auto Workers Local 2865, representing 12,000 graduate student workers at the University of California.

Members of the reform caucus Academic Workers for a Democratic Union (AWDU) are staging sit-downs at their union headquarters in Berkeley and Los Angeles, demanding that their union resume the vote count immediately.

A heated election, the first real contested one in the union’s 11-year history, pitted incumbent leaders, organized as United for Social and Economic Justice (USEJ) against AWDU. Only 1,500 members had voted in the previous officers election, but more than 3,200 members cast ballots last week.

Now ballots from Berkeley and Los Angeles, representing nearly half of all votes cast, remain uncounted. Members on those campuses risk being disenfranchised.

The count began Friday, after three days of intense voting on nine UC campuses. Both sides filed many challenges alleging election irregularities, but the local’s elections committee agreed on Saturday morning to proceed with the count and address the challenges afterward.

Counting proceeded smoothly throughout Saturday, with the tallies showing a tight race. The two largest campuses, Berkeley and UCLA, had yet to be counted. UCLA was a hotly contested battleground, and Berkeley is an AWDU stronghold. The numbers were not in the incumbents’ favor.

At 5 p.m. Elections Committee Chair Travis Knowles called for a one-hour break, during which he consulted with incumbent Jorge Cabrera, southern region vice president. The one-hour break turned into a three-hour break.

When Knowles reappeared, he remarked on the seriousness of the challenges and then moved to “partially certify” the election results. Resolution of the challenges for Berkeley and UCLA would be referred, he said, to the local’s Joint Council, which does not meet until July.

Knowles quickly called for a vote of the elections committee—although he did not call for “nays”—and declared the motions approved. He then fled the premises along with all USEJ supporters in attendance. AWDU supporters and other election observers secured the ballots and began monitoring them around the clock in the LA union hall.

Yesterday, 100 Berkeley members rallied on short notice to demand a resumption of the vote count. They marched to the Berkeley union headquarters and sat down to protest their potential disenfranchisement. They’re taking shifts and vowing to remain until the vote count is completed.

Members at UCLA have set up a live webcam of the abandoned ballots to monitor them, and have started a Facebook page for the Abandoned Ballot Boxes.

The suspended count and the sit-downs have gotten the attention of the UAW International. Mike Miller, International rep, met with both presidential candidates yesterday and expressed a willingness to resume the vote count, but no firm timeline has been set to re-start the count.

A group of more than 80 labor scholars has called for all the votes to be counted. Paul Worth, a member of the Berkeley City Labor Commission, California State Senator Loni Hancock, and Assemblywoman Nancy Skinner have expressed concern about the vote count as well.

Head to awdu.org to learn more, see a live stream of the sit-down, and sign a call for the immediate resumption of the vote count.

Barry Eidlin studies sociology at UC-Berkeley and is a member of UAW Local 2865 and AWDU.