Georgia: The New 'Show Me Your Papers' State 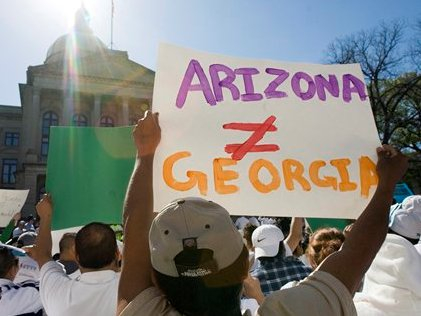 Thousands rallied in Georgia last week, protesting anti-immigrant legislation. While Arizona-like bills are advancing in other Southern states, Georgia was the first to have a big show of opposition. Photo: Facing South.

Thousands rallied at the Georgia state Capitol last week, protesting anti-immigrant legislation. While Arizona-like bills are advancing in other Southern states, Georgia was the first to have a big show of opposition.

The bill, which has passed both Republican-controlled chambers and is awaiting reconciliation, would institute a “show me your papers” approach to law enforcement, mandate use of the faulty E-verify system for authorization to work, and make it a felony to work if the job was obtained with false documents.

Like Arizona’s bill, Georgia’s stands little chance of surviving court challenges, advocates say, since the federal government alone has the power to set immigration policy. But the fear and uncertainty the legislation produces is enough to destabilize communities. Already, four counties in Georgia have signed on to 287(g), a federal program that allows local police to enforce federal immigration law, which has led nationwide to 108,000 immigrants in two years being detained and put in line for deportation, mostly over minor matters, such as traffic violations.

LN: Why did the outpouring of dissent happen first in Georgia?

AN: Because this is a community effort we’ve built for a long time. We had 5,000 out for May 1 last year. This affects not only Latinos—the true story is that it affects all kinds of groups. The word went out, and we had immigrants from China, Korea, refugees from Africa. We work in coalition, and students, LGBT groups, elected officials came out, too.

LN: Organizers estimated 9,000 people came out to the rally. Are more people getting involved now?

AN: People are feeling the impact of 287(g). We set up a hotline in 2007 for people to call if they’re involved in a detention. We hear the voices of many women left behind, left alone, because the person who took care of the family is gone. A lot of sorrow, a lot of pain.

LN: During debate on the bill, Representative Al Williams read from a Georgia woman’s old slave pass, which stipulated where and when the woman could walk around by herself. You’ve seen a lot of support from black lawmakers.

AN: There is a historical parallel there. These actions—the discrimination and racism—are still embedded in the South. Denying education, separating families, challenging the Constitution in order to segregate one group into a second class, that should tell you something is not correct.

LN: Some reports suggest people are packing up and leaving, not wanting to find out what the bill does to Georgia.

AN: There are people leaving, people closing their businesses because of this. But most immigrants have nowhere to go to. We have houses, apartments, kids in school. So we stand up and fight or wait for the traffic stop, and wait for (immigration authorities).

LN: There wasn’t much union presence at last week’s rally. Are Georgians making connections between what’s happening in the Midwest and in the South?

AN: People are inspired by what’s happening in Ohio and Wisconsin. But we’re living two different moments—it’s not just jobs, it’s racial profiling, detention, family separation. It’s different fruits of the same struggle. Anti-labor, anti-immigrant, anti-everything these days. Something is wrong when the moderates are called radicals and the extremists are seen as normal. Ours is a struggle to come back to sanity, to come back to the struggle for civil rights.

Mischa Gaus was the editor of Labor Notes from 2008 to 2012.mischagaus@gmail.com
Related
Viewpoint: A ‘Union’ That Pushes to Deport People Is the Labor Movement's Opponent »
Work Is the Reason Latinos Are Getting Slammed So Hard by the Pandemic »
South and Southeast Asian Workers Grapple with Management, Government, Coronavirus »
Labor Notes Goes to Asia »
Steward's Corner: How to Respond If a Member’s Work Authorization Is Challenged »