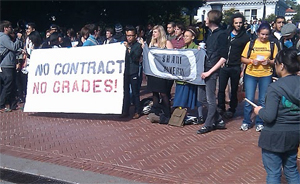 Activist grad students rallied at Berkeley and throughout the University of California system ahead of a hotly contested contract vote last week. For many rank-and-file activists, the “no” campaign was also a referendum on tepid union leadership. Photo: thosewhouseit.wordpress.com.

Nearly 4,000 graduate students in the 10-campus University of California system voted to approve a three-year contract with the university last week. This landmark turnout was due primarily to a campaign organized by dozens of rank-and-file members across the state urging their co-workers to reject the contract and send United Auto Workers Local 2865 back to the table for more.

This is the first time in the 12,000-member local’s history that any vote has been so hotly contested.
The contract, which was ultimately approved by a two-thirds margin, would guarantee teaching assistants and academic student employees a 2 percent raise annually for three years, with increases in childcare reimbursement.

It was reached after several months of stalling by UC. Eventually, some activists argued, the union gave in and accepted UC’s offer—which fell far short of expectations for a higher wage increase, larger childcare reimbursement, class size caps, and earlier notification of job assignments. The latter two demands were abandoned altogether by the union.

Opponents are quick to point out that the wage increases, while better than what other UC workers have received, are less than inflation and are being quickly outpaced by increases in campus living costs. By the union’s own figures, UC grad students make about 7 percent, or $1,000, less than their peers at comparable universities, averaging about $17,000 a year.

The union’s initial demand of a 7 percent increase, followed by 5 percent the next two years, was quickly abandoned even as it filed ULP claims against UC for surface bargaining and refusing to provide cost data. A union email to members October 27 asked whether the university’s “bad-faith bargaining constitutes justification to call an unfair labor practice strike.” But two weeks later, union leaders announced an agreement had been reached, with few improvements.

Rank-and-file activists believed a grassroots movement was necessary to win in bargaining, and supported organizing for a strike even before negotiations began. They felt the leadership had no interest in mobilizing the membership, much less in mounting a credible strike threat, leaving the union with little power in bargaining.

Dissidents argued there was no risk in voting “no”; we could only get more. Union officials, on the other hand, were concerned that UC might retract its offer or declare impasse.

For many rank and filers and some stewards and elected leaders, the “no” campaign wasn’t just about the contract: it served as a referendum on union leadership and its organizing strategies.

The university determined that it would cost $11.5 million to bring UC graduate pay in line with the national average, but the union leadership did little to publicize that UC had given $11.5 million to upper-level administrators in bonuses just the week before bargaining began.

Activists complained that leaders failed to adequately communicate with the membership during negotiations, and didn’t take advantage of the earlier mobilization that activists had done on campus to battle deep budget cuts and support negotiations.

Union leaders bought into the budget crisis story that administrators offered, tempering their stance even as it became obvious that there would be money in the UC budget for pay increases.

Compared to other unions on the UC campuses, UAW produced very little analysis of the budget crisis, and even seemed to tacitly support the current misallocation of funds, which prioritizes top-dollar administrators and luxury building projects over the needs of students and campus workers.

Activists also raised questions over pay raises for UAW staff and senior leaders—and their attitude toward members. As negotiations wrapped up, executive board members voted to raise their pay to more than twice that of members. Some rank and filers see this fitting into a broader attitude of arrogance and superiority.

A last division between leaders and members came over strategy and goals. While most statewide leaders are aligned with the UAW International’s ruling Administration Caucus, a few dissenting leaders voiced support for oppositionist Gary Walkowicz’s run for the presidency last summer.

A victory for the “no” campaign would have set a dangerous precedent for the UAW. Graduate students at the University of Washington have expressed similar concerns over the management of their local, and restless graduate students hammered by the recession everywhere are looking for a more active role in their union.

With so much on the line, some members feared the election result might be manipulated. The union’s election commissioner made several changes to election procedure the night before the vote and throughout the election. An election committee decision to provide daily vote tallies to each campus’s elections commissioner was rescinded on the first day of voting, though these figures may have been accessible to members of the Administration Caucus.

Most concerning, however, is the turnout figures. Berkeley, Irvine, and Santa Cruz—the most organized campuses in the system, each turning out hundreds of students and grad students last year during budget protests, and the only schools actively organizing around the contract negotiations up until the vote—turned out 50-60 percent of members to vote.

But San Diego and Santa Barbara campuses, known more for their inaction and lack of union participation, turned out 60-70 percent, with 90 percent voting “yes.”

Unless clear evidence of fraud emerges, however, the “no” campaign has conceded defeat.

Still, the campaign achieved something. More members voted and became involved than ever before. Membership meetings at Berkeley, for example, have gone from seven or eight attendees to 50. Activists have developed networks and built a foundation for future organizing and agitation within the union.

Perhaps most importantly, the union stopped taking its members for granted, and members showed they will fight—even if their union won’t.

John Bruning is a member of UAW Local 2865 and a sociology graduate student at University of California, Irvine.

1) The contract was NOT approved by a 2/3 margin, it was approved 62% to 38%, so the margin was only 24%. The email from the executive board of the local to membership informing of the results was willfully misleading, stating "contract ratified by 62% margin." Members could only see the real results by clicking through to a link. One more example that, even if outright fraud was not committed, manipulation of facts and information certainly was. Here are the results figures: http://www.uaw2865.org/elections/upcoming.php

2) It's not the union's figures that show that grad student instructors make on average $1000 less than at comparable institutions--those are the UC's own numbers! Found by Vice President for Research and Graduate Studes Steven Beckwith in a report to the Regents. See the Inside Higher Ed report: http://www.insidehighered.com/news/2010/07/27/uc

Again, as you stated, the union hadn't done research to find this out, the UC itself found this. And yet our negotiating team still couldn't mobilize this argument to get us a raise above inflation.