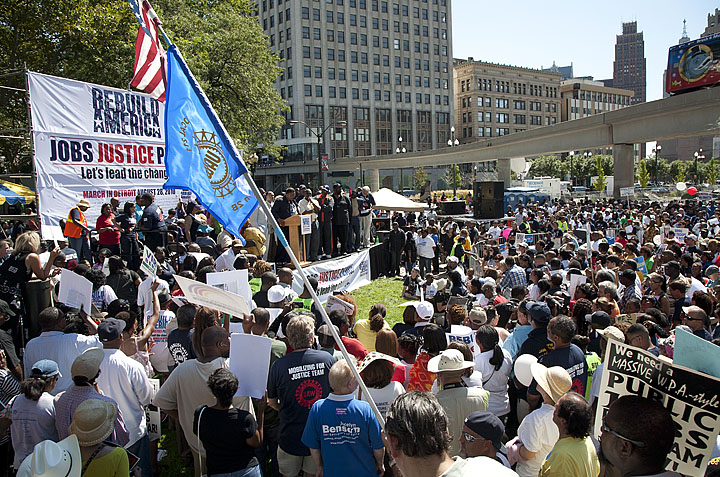 5,000 people attended a march and rally organized by the UAW and Rainbow PUSH in Detroit Aug 28 to call for job creation. Photos: Jim West/jimwestphoto.com

Forty-seven years after Martin Luther King, Jr. uttered the words “I have a dream” to an overflow crowd on the Washington Mall, August 28 still has resonance for civil rights activists, the union movement, and, now, the Tea Party.

On Saturday the United Auto Workers (UAW), the Service Employees (SEIU), a handful of other unions, Rainbow PUSH, and delegates from the nearby Michigan Democratic Convention led a march of 5,000 down Detroit’s Woodward Avenue to call for “Jobs, Justice and Peace.”

UAW organizers picked August 28 to commemorate the 1963 civil rights March on Washington. Then-UAW president Walter Reuther joined King on the march and stood beside him during the famous speech.

This year's march called for reindustrialization and job creation, stronger workers’ rights law enforcement, and peace—an end to the wars in Afghanistan and Iraq to funnel money toward “rebuilding America.”

The crowd was a sea of blue punctuated with purple—UAW and SEIU shirts, respectively. Ministers of city churches played a prominent role on the stage. It’s been a while since unions in Detroit have marched with civil rights leaders, as Reuther did all those years ago, and in the hot sun, it was refreshing.

UAW President Bob King told the crowd, “Here’s a mistake we made: we didn’t keep marching” after working to get President Obama and a Congressional majority of Democrats in office.

King asked three things of listeners: to come out in droves to the traditional (and sadly dwindling) Detroit Labor Day parade, to mobilize for the October 2 “One Nation” rally in Washington, D.C., sponsored by unions and the NAACP, and to get to the polls and vote Democratic November 2.

Speeches centered on the need for jobs in the economically blighted city and state. Rainbow PUSH founder and civil rights leader Jesse Jackson called Michigan and Detroit “ground zero of the urban crisis.”

King is evidently making good on his promises to have the UAW support just causes, but the union’s member mobilization muscles have atrophied after going largely unused for years. A large number of the UAW marchers were staffers, appointed reps, or local officers, or were delegates to the Democratic Convention at the hall a few steps away.

Michigan Democratic gubernatorial nominee Virg Bernero spoke on the fight of “Main Street” against “Wall Street.” Bernero’s advocacy of Main Street has put him on unfriendly terms with the state’s corporate class, who find him radical—though as mayor of Lansing he has granted generous tax abatements to General Motors. GM tops the list of 25 companies who have cost the country a total of 700,000 jobs in recent years.

The UAW/Rainbow PUSH march gained some local press but was dwarfed by the “Restoring Honor” rally held the same day on the site of Dr. King’s 1963 rally in Washington, D.C. Glenn Beck, the conservative pundit, said he was unaware of the anniversary when he scheduled the event. His followers filled up the Washington Mall, surrounding the multi-million-dollar speakers placed along the Reflecting Pool, notably absent in footage of 1963. Attendance tallies varied from less than 100,000 to half a million.

Speaker Sarah Palin cribbed from both Abraham Lincoln and Dr. King. Like King, Palin hailed Lincoln as a great emancipator. Palin praised Washington, Lincoln, and King for having “a rock solid foundation under the one true God of justice.”

After the rally Beck roused controversy by telling FOX News that “most Christians don’t recognize [Obama’s] version of Christianity”; earlier, he’d exhorted listeners to avoid churches with a message of “social justice”—like those led by the ministers who stood alongside union presidents and Jackson in Detroit.

I couldn’t help but notice the differences between the march in Detroit and the rally convened in D.C. Marching in a multiracial crowd in downtown Detroit—one of the first places where Black workers entered the middle class but where they’re now getting pummeled—I was reminded of my own home community in rural Michigan.

As all the little shops are shutting down in my county—my own father kicked out of the oil industry after 20 years and still living paycheck to paycheck—the economic anxiety of white working class families is bubbling up. Beck and Palin’s message to bring our country back to God resonates in small towns like mine where our churches (and the high school football games) are the de facto watering hole.

Beck’s crowd was dubbed “overwhelmingly white” by the media. How much is Beck subtly playing into white people’s fears by telling them President Obama is not the right kind of Christian (if not a Muslim), at a time when Arizona’s new anti-immigrant law and the Islamic center in Manhattan are demanding people take a stand on one side of a fence or another? The fact that Beck has a ready audience of people from towns like mine, chills.

Back in Detroit, gospel choirs and preachers alike also invoked God’s help, but the heartfelt prayers for jobs and economic stabilization for those hardest hit by the recession felt a lot more substantive than “restoring honor.” Black workers, already struggling, hit rock bottom during this latest recession, but Detroit’s rally asked for solutions for all.

But Detroit’s march was also far from fulfilling King’s legacy. It’s clear we’ve got a lot of work to do—and wounds to heal—before we can get to that mountaintop.

Tiffany Ten Eyck is a former staff writer and organizer with Labor Notes.
Related
Countdown to a Strike Tonight at John Deere »
Interview: A Mexican Auto Worker on the Fight for a Real Union at GM's Silao Plant »
John Deere Workers Overwhelmingly Reject Contract, Could Strike Wednesday Night »
In a Surprise, John Deere Workers Get to See Contract Before Voting On It »
Auto Workers to Vote on Direct Elections for Officers »