Here comes round two: Amazon's battalion of unscrupulous union-busters has descended on the Staten Island sorting facility where workers will begin voting April 25 on whether to unionize. "It's a war in there," said Amazon Labor Union Treasurer Madeline Wesley. Photo: Amazon Labor Union

The company has billed itself as the everything store. Now Amazon is the throw-everything-at-them union-buster—trying every trick in the playbook to throttle worker organizing at its Staten Island warehouses in New York City.

The union vote at a second warehouse, a neighboring sorting center known as LDJ5, is set to start April 25, so the company has turned its focus there.

“All those union-busters that were there to union-bust 8,000 workers at JFK8 have walked across the street and are in our little building of 1,600 people,” a visibly shaken Madeline Wesley, who works at LDJ5, told reporters at a press conference last week. “They’re really fighting us, and they’re playing really dirty.”

Wesley is the treasurer of the Amazon Labor Union. Amazon has reportedly blamed her for the suicide of another worker.

“Anti-union workers have been throwing homophobic slurs at us,” she added. “It’s a war in there.”

Amazon paid out $4.3 million last year to union-busters whose job is psy ops: lying and distorting facts to prevent workers from forming unions.

“A campaign against a union is an assault on individuals and a war on the truth. The only way to bust a union is to lie, distort, manipulate, threaten, and always attack,” wrote Martin Jay Levitt, a former anti-union consultant, in Confessions of a Union Buster.

Tabitha Wilson was part of SEIU’s fast food workers campaign when she worked at McDonald’s. Now she works at LDJ5, and she has been with the ALU since she learned about Chris Smalls’ firing during the pandemic.

Amazon has filled the warehouse with out-of-state consultants. “They already know our names” after only briefly meeting workers, she said. But “we don’t know who they are.” 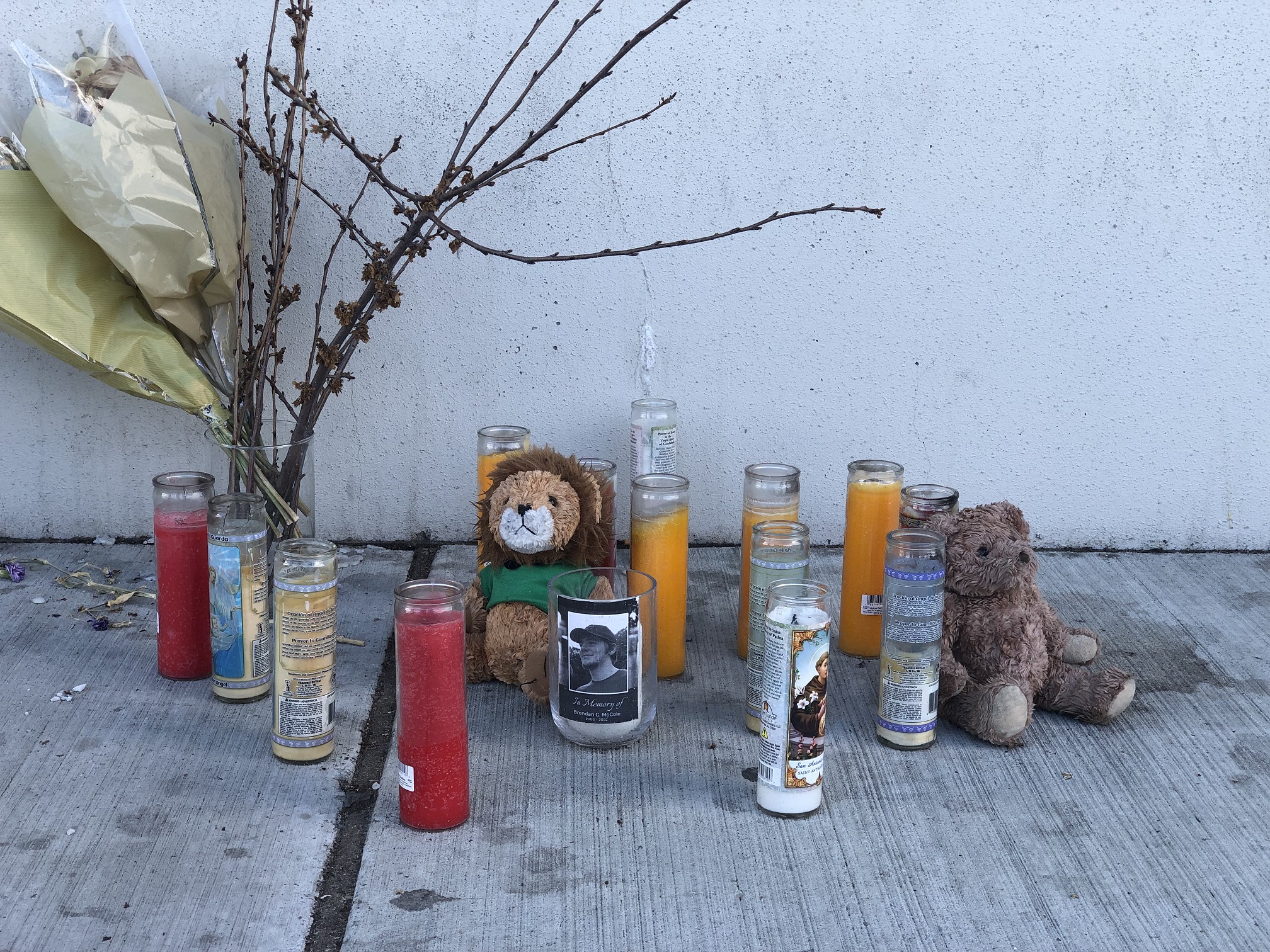 Workers have set up a memorial to a co-worker who died by suicide. Management has tried to twist the tragedy into a union-busting talking point. Photo: Luis Feliz Leon

The union supporters at Amazon include many, like Wilson, who have been part of a union before—such as former crossing guards with AFSCME District Council 37, building cleaners with SEIU Local 32BJ, and hospital clerical workers with 1199SEIU.

“Other places got unions. Why don’t y’all want unions?” said Ashley Banks (a pseudonym to protect her from company retaliation), who was a 32BJ member when she worked in commercial cleaning for Alliance Building Services.

“I can’t believe the building across from us, JFK8, got a union,” said 18-year-old Ursula Tomaszuk. “I thought it wasn’t doable until now.”

“It doesn’t make sense to me that they bring people from other states and warehouses to tell us to vote no,” said Memo Merlin, 22, who is leaning towards voting yes.

The company has brought in ultra-conservative union-buster Rebecca Smith, as Lauren Kaori Gurley reported in Vice. Smith wrote an anti-union propaganda book, Union Hypocrisy. She’s a turncoat who trades on her Teamsters background—though what she did for the union was safety training, and reportedly her co-workers there petitioned to get her fired for incompetence.

One of the consultant firms “advertises that it offers ‘a team of men and women who represent bi-lingual, ethnic and cultural diversity’ that will ‘meet with the individual employees, establishing both rapport and credibility,’ and notes that its services will help address situations in which the company’s management and supervisors do ‘not reflect the racial mix of the workforce,’” reported Terri Gerstein of the Harvard Law School Labor and Worklife Program.

Despite Amazon’s efforts, many workers are resisting the grip of fear. Kathleen Cole got involved with the union after she was compelled to attend a captive-audience meeting.

She recalled a fellow worker asking in one of those meetings, “If I vote for the union, could that be held against me? Could I be fired?”

The union-buster wouldn’t answer the question. “He just kept going around in circles,” Cole said. “So I got angry because I’m like, ‘He’s intimidating this poor guy.’”

Then she stood up, saying, “No, you cannot be fired for signing a union card. It’s against the law.”

“I’m not a fighting type. But that’s just wrong,” she said. “To be honest with you, if they were fair and neutral in these meetings, I probably never would have even gotten involved.”

I spoke to more than 50 workers at various shift changes over the past weekend and found that many were still undecided, seeking more information.

Eric Alberto, 19, said he’ll make up his mind after he reads ALU’s constitution and bylaws, which are available online, to learn more about what the union stands for and its plans.

Anthony Hernandez, 24, is concerned about whether the union can deliver. “I don’t know which fact is true and which is not,” he said.

Alejandro Xochimitl Toxqui, 22, has been working at LDJ5 since it opened in 2020. He had a bad experience with unions in his native Mexico where he worked at a Volkswagen auto plant. But he said he would vote for the union if it could win extra pay for skilled jobs like learning ambassador, where you train other workers, and trailer docking and releasing (TDR), a job in the trailer yard that workers must be certified to perform.

Toxqui and Merlin argue that Amazon should bump workers’ pay once they take the exams and get certified to perform these roles.

Workers want voluntary extra time (VET) and a return to 20-minute breaks, which Amazon trimmed down to 15 minutes.

Unlike at the fulfillment center JFK8, where the workers have sore and tired bodies from grueling shifts, the top grievance at the sorting center LDJ5 is not getting enough hours to make ends meet.

Outside the facility Saturday afternoon at shift change, JFK8 worker-organizer Justine Medina confirmed what I had heard about the need for more hours.

Another common concern revolves around ALU being too new and inexperienced to effectively negotiate a contract. “And then we explain a lot of the unions that are in our corner,” Medina said. “Now you have Teamsters President Sean O’Brien shaking Chris Smalls’ hand, saying they’ll give all the resources in the world.

“So basically, every union is in our corner now. There’s no lack for experience.”

It’s a good thing that ALU’s self-organized efforts are now backed by the institutional heft of the labor movement. The support will be needed to withstand Amazon’s fierce opposition and arsenal of attacks.

This is a company that has fought off many union drives over the years; it expects surrender from workers and brutal repression from managers. When the Communications Workers and the Food and Commercial Workers were trying to organize at Amazon two decades ago, the company put its supervisors on high alert.

“If workers became anything less than docile, managers were told, it was a sign there could be union activity,” according to The New York Times. “Tipoffs included ‘hushed conversations’ and ‘small group huddles breaking up in silence on the approach of the supervisor,’ as well as increased complaints, growing aggressiveness and dawdling in the bathroom.”

The union-busters’ efforts will be bolstered by Amazon’s censorship and surveillance regime. The company has planned an internal messaging app that would block workers from using words or phrases like “union,” “pay raises,” “living wage,” or “representation,” according to documents leaked to The Intercept.

A HIGH RATE OF INJURIES

Safety and working conditions have been prime motivators behind Amazon workers’ walkouts since the pandemic began, and behind their union drives.

Tristan “Lion” Dutchin, 27, shared a lyric from one of his songs inspired by the degradation at Amazon: “The system tries to hold us down and hold us back to a lower level. The Amazon corporation is nothing special. It treats workers like slaves. And that is the work of bad energy. And never again in your life settle for something mediocre—settle for something that’s high above your demands, above your standards.”

Amazon has filed 25 objections with the National Labor Relations Board seeking to overturn the ALU’s watershed victory, arguing that the independent union intimidated workers into voting to unionize and challenging how the NLRB conducted the election.

In one of its objections, Amazon said organizers “intentionally created hostile confrontations in front of eligible voters” when they disrupted compulsory captive-audience meetings where its highly paid consultants spouted lies and denigrated unions.

The General Counsel for the NLRB, Jennifer Abruzzo, is asking the Board to make these mandatory meetings illegal.

“Every worker who votes yes for the union—JFK8 and LDJ5—is a hero,” said Wesley. “Can you imagine standing up to one of the richest companies in the world?”