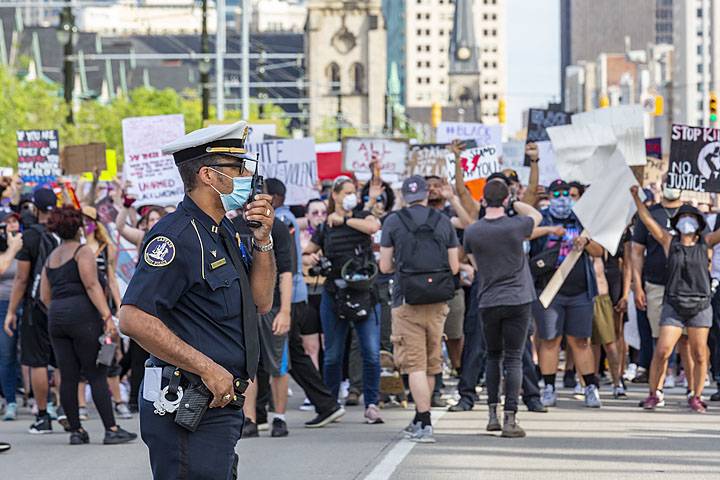 Update, June 18: Last night in a roll call vote, the Martin Luther King County Labor Council expelled the Seattle Police Officers Guild. Delegates' votes are weighted by the number of members for whom their unions pay per capita fees to the labor council; the vote was 45,435 yes, 36,760 no. Hundreds of supporters of the expulsion rallied last night awaiting the results of the virtual meeting. SPOG had met with the labor council and issued a weak letter acknowledging racism as a social problem affecting many institutions. Next step for antiracist unionists everywhere: show up to support Black Lives Matter protests tomorrow, Juneteenth, with your union gear! —Editors

Do police unions belong in the labor movement? It’s a question on the lips of many unionists amid a nationwide uprising for racial justice and against police violence—and Seattle is the test case.

Delegates to the Martin Luther King County Labor Council, which includes Seattle and its suburbs, will decide June 17 whether to kick out the Seattle Police Officers Guild.

Two resolutions brought the issue forward. One, backed by the teachers union in the working-class Highline area south of Seattle, calls for kicking the cops out, full stop. The labor council’s executive board has heard it but not yet voted on it.

An alternative resolution, submitted by SEIU Healthcare 1199NW and Food and Commercial Workers (UFCW) Local 21, passed June 4. In it, the executive board set an ultimatum for the police guild to meet certain demands by June 17 or else be kicked out.

UFCW Local 21, regarded as a progressive force in Seattle’s labor movement, finally joined the labor council in April—becoming its largest affiliate, with 46,000 members. It has also called for Seattle Mayor Jenny Durkan to resign over police violence against the protesters.

If the demands are not met by June 17, the resolution says, the board will recommend a disaffiliation vote to its full delegate body, which meets that night.

It’s quite a turnaround from two years ago, when this same labor council was holding press conferences and testifying at the city council to support a controversial police contract.

The meeting between the police guild and the labor council board hasn’t happened yet. A date was set, then canceled by the cops, then rescheduled.

Claude Burfect, who represents the Coalition of Black Trade Unionists on the labor council’s executive board, said he had mixed emotions but was leaning towards a yes vote to expel the guild.

He’d like to see organized labor at the bargaining table pushing for reforms, like making police officers keep their body cameras turned on at all times. He has warned his own son to keep his hands open and in view if he’s ever stopped by police.

Police violence has been a problem for years, he said, “but it has escalated ever since we’ve had Bunker Boy [Trump] and he is trying to have a police state. It’s almost like he’s giving the police the right to do what they want to do, and it has escalated across America.”

“This is a ‘which side are you on’ moment in our history,” said April Sims, secretary-treasurer of the Washington State Labor Council, a separate entity which for the past five years has been pushing its affiliates to start internal conversations on race and labor. “Giving the police unions an opportunity to decide what side they want to be on is an important first step.”

On the national scene, the Writers Guild of America, East on June 8 became the first union to call for the AFL-CIO to break up with the International Union of Police Associations. SPOG, the largest police union in the Northwest, is not a member of the IUPA.

AFL-CIO President Richard Trumka has responded tepidly to the rising calls. “The short answer is not to disengage and just condemn,” he said on a press call about racial justice, the Center for Public Integrity reported. “The answer is to totally re-engage and educate.”

But in Seattle, that experiment has already been done; the results are in.

SPOG joined the labor council in 2014. “The argument of some people was, if we bring them in we can cultivate them in an atmosphere of solidarity and labor values, and maybe we can influence their behavior,” said Mike Andrew, who represents Pride at Work on the labor council’s executive board.

Two years later the guild got its first African American president, Kevin Stuckey. (The previous president had resigned over a Facebook post in which he implied the Black Lives Matter movement was responsible for the shootings of Dallas police officers.) Stuckey worked to cultivate a friendly relationship with other members of the labor council.

In 2018, the police guild negotiated a controversial contract with the city. Community activists and even some in the labor movement opposed the contract for its limits on, and secrecy around, the discipline of police officers.

But the labor council backed the police. Union leaders showed up in hearings to testify in favor of the contract, sometimes as the only pro-police speakers in rooms packed with people concerned about police violence and racism—not a great look for labor.

Seattle’s police department has been under a federal consent decree since 2012 for excessive force and bias against people of color. Some critics argued that the 2018 contract violated that consent decree; last year a federal judge agreed.

Meanwhile, police guild members apparently weren’t on board with Stuckey’s approach. This February in a landslide they elected a new president, Mike Solan, who ran on a hardline message.

Solan’s campaign video shows protesters marching with a Black Lives Matter banner, followed by footage of cops in riot gear attacking protesters. Tagline: “It’s time to get serious.” A narrator touts how Solan, as SPOG vice president, responded to a deadly shooting last year: by holding a press conference at the scene to support the two officers who had just killed someone. He is shown complaining to Fox that “police officers now are being held to an unreasonable standard”; he promises to thwart “the anti-police activist agenda that is driving Seattle’s politics.”

Will this guy even give lip service to Black Lives Matter? More important, will he follow through with actual change? It’s hard to imagine.

“The guild has been their own worst enemy in a lot of ways,” Burfect said. “They feel they can do whatever they want.”

HOW TEACHERS GOT ON BOARD

The educators who brought forward the first resolution see it as just the start of the work to build an antiracist labor movement. I spoke with a group of five, part of an emerging caucus in their union—working title, Highline Caucus of Rank-and-File Educators.

The Highline school district covers a collection of cities and unincorporated areas south of Seattle, including the immigrant-dense city of SeaTac, where airport workers’ organizing kicked off the national movement for a $15 minimum wage.

Police officers are a daily presence in their schools, though the euphemistically named “school resource officers” are from the county sheriff’s department, not the Seattle police. Many teacher unions across the country are now pushing their districts to break off these contracts.

Rupika Madhavan, a building rep who will be on her union’s executive board next year, said the high school where she teaches has an SRO plus two security guards—but only gets a fraction of a full-time social worker, split among four schools. “We are very short on social workers,” she said. “So there is a lot of validity to the idea that defunding the police and supporting these other resources would have a real positive impact on our school communities.”

Inside the Highline Education Association, the resolution was organized fast. The morning of June 1—a Monday, coming off the first weekend of nationwide protests after George Floyd’s murder—teachers hatched the idea by text message to bring a resolution to the virtual meeting of their council of building reps that very night.

Next came a flurry of conversations with building reps, counting votes. Going into the meeting they didn’t have a majority yet, but the conversation swayed people. The final vote was close to unanimous.

“A lot of times, Black people, indigenous people, and many people of color are dehumanized by the white gaze,” she said. “It’s a frustrating fact that I have to humanize myself. But I noticed that, when people started telling stories, the rumble in the chat was quieted and there weren’t as many folks speaking against.”

WHO BELONGS IN OUR MOVEMENT?

This group of teacher activists also launched a cross-union petition of Black, indigenous, and people of color (BIPOC) union members countywide. So far 826 people from a variety of industries and unions have signed.

Michael Williams, another building rep, said allying with the police “makes no sense if you’re trying to grow a labor movement in South King County.” His students are mostly immigrants; many of their families work in construction. In these communities, “unions don’t have a great name,” he said, “and it’s because of things like this, where they’re willing to side with predominantly white unions or racist unions over trying to expand the labor movement.”

“The council’s association with them, in my opinion, has done nothing but bring discredit on the labor movement, without any improvement in the behavior of Seattle police,” said Mike Andrew, the labor council’s executive board member from Pride at Work.

“The entire world is looking at videos on their Twitter feed or on the news and they see the behavior of the Seattle police and think it is excessive or unjustified, and SPOG comes out with a statement, ‘No, this is righteous policing,’ and I think a lot of people are just fed up with it.”