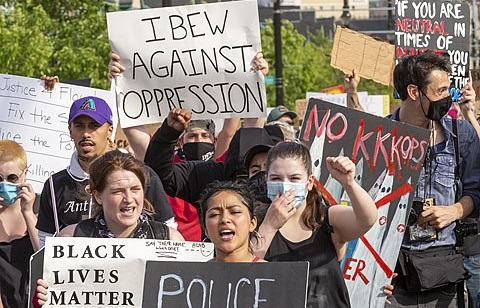 Historically unions have been wary of opposing the police. But the current sea change in public opinion should embolden us. Photo: Jim West/jimwestphoto.com

The marches are sweeping every state. Hundreds of thousands of people have braved the pandemic to protest the murder of an unarmed Black man, George Floyd, by Minneapolis police.

Like the teacher strike waves of 2018 and 2019, today’s protests against police violence have the support of a majority of Americans. A Monmouth poll showed 78 percent think protesters’ anger about the killing of George Floyd is wholly or partially justified.

What reform would actually make change? Body cams and de-escalation training have not worked. Protesters have been demanding consequences for violent racist officers—not just firing but criminal charges. In an unprecedented step, yesterday the charge against officer Derek Chauvin was upgraded to second-degree murder and the other three involved officers were also charged.

But in Minneapolis and around the country, there’s another rising demand that could have even more profound effects: Defund the police. Scale back their outsized budgets and redirect the money to much-needed services.

HOW MUCH DO COPS COST?

The cost of policing is exacted first and foremost in the damage to Black lives—and second in an enormous drain on public resources. Every dollar spent on police is a dollar not spent on schools and city services.

Big cities like Minneapolis, Los Angeles, Atlanta, Detroit, Baltimore, and Houston spent more than 25 percent of their general fund budgets on their police departments, according to a 2017 report by the Center for Popular Democracy.

Chicago and Oakland spent even more, 40 percent. And while New York City’s share was far lower at 9 percent (because the city had a much larger total budget, including a system of public hospitals), the dollar amount it spent was staggering, almost $5 billion—or $581 per person. The city's police budget has since risen to $6 billion.

All told the United States spends $100 billion on policing each year, and then another $80 billion jailing people. It’s the one line on city budgets that’s rarely on the chopping block, in good economic times or bad, whether crime goes up or down.

Now cities and states are drowning in red ink, forecasting tax shortfalls of millions of dollars because of the COVID-19 crisis. Politicians are already demanding severe cuts. Public sector unions are saying there’s nothing left to cut from schools or transit—and a few are pointing to the one department that’s always well-funded.

In Philadelphia, for instance, the mayor’s proposed budget includes hundreds of layoffs, including an $18 million cut to street sweepers. Union sanitation workers in AFSCME Local 427 and the Campaign for a Just Philly Budget are organizing a June 9 rally to protest the cuts—and the fact that while everyone else gets squeezed, the mayor is trying to increase police funding by $14 million.

In Los Angeles, under pressure, the mayor just reversed himself and announced cuts to the police department.

WHAT’S NOT FUNDED: SOAP IN HOSPITALS, PAPER IN SCHOOLS, BRAKES ON BUSES

Budgets reveal a society’s priorities. Two photographs circulated on social media this week, driving the point home. One showed cops decked out in expensive military gear. The other showed health care workers wearing garbage bags because of the shortage of basic protective gear during the pandemic.

You can find similar stories across workplaces. The Philly sanitation workers mentioned above fighting budget cuts have also been petitioning the city to provide them basic protective gear, hazard pay, and access to coronavirus testing since their work has been deemed essential.

During last year’s teachers strike in Oakland, an elementary schooler on the picket line piped up with the chant, “What do we want?” “Paper!” “When do we want it? Now!” It had to be said out loud, that students deserve paper at their public schools.

Workers in a New York City public hospital had to organize a pressure campaign to get soap in the bathrooms. Transit workers in D.C. had to threaten a strike to get functioning brakes on their buses.

Soap, paper, and brakes are the tip of the iceberg. We have a threadbare safety net and barebones social services. Cops fill the gap, poorly.

Police are often deployed against social problems they have no idea how to deal with—confronting people who are homeless or substance abusers, or who can’t access mental health care. They often respond with the tools of their trade: violence and arrests. When all you have is a hammer, everything looks like a nail.

Even with crimes like drugs and burglary, throwing police at the problem doesn’t solve the desperation that is often the root cause. Arresting and re-arresting people only makes their situation worse, creating a vicious cycle that disproportionately punishes people who live in poor communities, particularly people of color.

Policing is both harmful and expensive. It drains public money that could otherwise go to measures that would address the actual, underlying problems—things like drug treatment programs and creating good jobs. With rising poverty and record unemployment, we need such programs more than ever.

In Minneapolis the outrage over George Floyd’s murder is provoking many public workers to question their employers’ ties to the police.

Bus drivers refused to transport officers or arrested protesters. The University of Minnesota is cutting most of its ties with the Minneapolis Police Department; it won’t use them anymore for big events such as sports and concerts. The teachers union pushed the Minneapolis Public Schools to cancel its $3 million contract to put police in schools; the school board vote was unanimous.

Around the country, racial justice groups such as Black Lives Matter and Black Youth Project 100 and community coalitions have been making such demands for years. See, for example, People’s Budget L.A., the #NYCBudgetJustice campaign, the Portland-Metro People’s Coalition, and Reclaim the Block in Minneapolis—by no means an exhaustive list.

A handful of unions have joined these efforts. Among the best labor examples is the Chicago Teachers Union, which teamed up with 85 other organizations to oppose a new $95 million police academy. The community groups and unions argued that the money would be better spent on public housing, the transit system, and support staff in the schools. During last year’s strike, the teachers also proposed that if a school removed the cop assigned to it, the school could use the funds for a social worker instead. The union didn’t win that one, but it has continued to demand schools without police.

In many cities, though, community groups have led the way while labor hung back. Historically unions have been wary of opposing the police. But the current sea change in public opinion should embolden us. The need couldn’t be more urgent.