Follow the Money: Employers Are Behind the Rush to Reopen 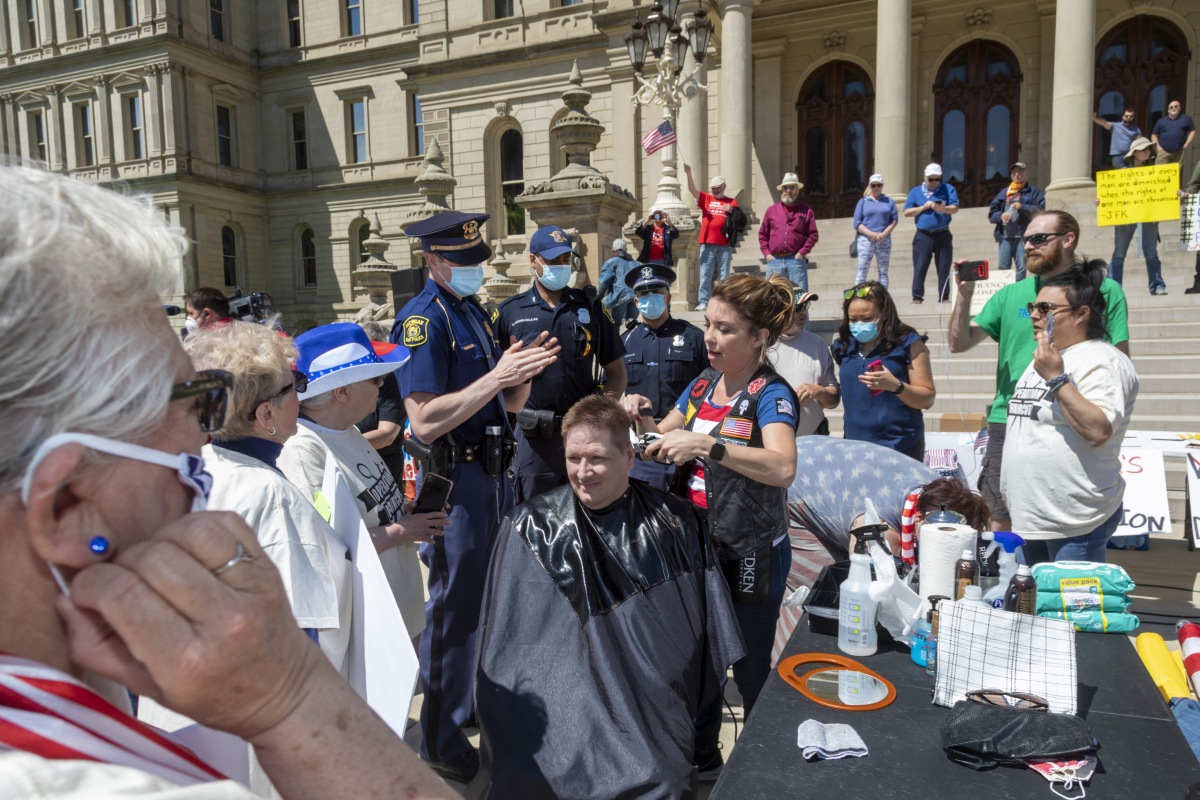 Anti-lockdown protestors in Lansing, Michigan getting haircuts in defiance of the state's restrictions on social distancing. Photo: Jim West

The federal government squandered the time the states spent in lockdown. We still face a national shortage of COVID-19 test kits and PPE and there is no nationwide testing or contact tracing program. The United States has 4 percent of the world’s population, but about a third of the world’s coronavirus cases.

But some folks were not wasting their time. True to form, the rich are doing everything they can to benefit financially from the crisis—and their work is paying off. The richest 400 Americans were already worth a collective $2.96 trillion last year, more than the bottom 60 percent of Americans combined.

Now many of the super-rich are poised to make even more during the pandemic—like the behemoth Amazon, which is propelling CEO Jeff Bezos even closer to becoming the world’s first trillionaire.

The goal of these powerful actors is twofold: to reopen the economy on their own terms and to capitalize on the economic crisis to push for a long-held wish list of cuts to taxes and government services. They will push for lower taxes and to gut services despite the glaring evidence, revealed by the pandemic, that we need more government, not less.

To do so they must get millions of workers to risk their health by returning to work. If workers aren't working, no profits are being generated. And which is more important to the captains of industry?

They are working hard to win the tug of war over reopening, hoping to overpower the dire warnings of the public health experts and the desires of the public, which polls consistently show are more worried about a surging virus than about a flagging Wall Street.

A Washington Post poll and a Pew survey both show that laid-off workers are more likely to support continued lockdowns than those still employed.

Their campaign has several parts:

The so-called recovery from the 2008 Great Recession saw Wall Street profits hit all-time highs while workers’ wages remained stagnant and union density hit an all-time low. “Recovery for me, poverty for thee” is again the corporate goal for the post-corona economy.

Conservative operatives are trying to reignite a Tea Party-like “movement” to pressure states to reopen their economies. A billionaire-backed network of corporate front groups with deep ties to conservative state lawmakers and the White House helped mobilize a motley crew to protest stay-at-home orders at state legislatures and amplified their actions in the media.

“It’s like strike-breaking,” said Nancy MacLean, author of Democracy in Chains: The Deep History of the Radical Right’s Stealth Plan for America. “You can find people who will do it, but without the active role of the employer it would never happen.

“The same is true for the anti-lockdown protests. It’s only because there are all these corporate-funded front groups that are supported and amplified by Fox News and the right-wing echo chamber that they can create the fiction of a mass movement and exploit the crisis to force through unpopular policies they know would never happen otherwise.”

At the heart of the push to reopen are organizations like Tea Party Patriots and FreedomWorks and prominent right-wing activists like Stephen Moore, a conservative economist who has worked for the Heritage Foundation and Wall Street Journal and once told filmmaker Michael Moore (no relation) that “capitalism is a lot more important than democracy.”

Moore is an economic adviser to Trump and has been pushing the White House to follow the advice of business leaders and conservative economists rather than public health experts.

Moore is also a leader in the Save Our Country Coalition (SOCC), which is coordinating the effort for reopening, tax cuts, and legislation to erase employer liability. He is just one of the many White House connections to SOCC. Another is the American Legislative Exchange Council (ALEC), financed by large corporations and conservative billionaires. ALEC's membership includes both corporate lobbyists and almost a quarter of all state legislators.

ALEC’s primary mission is to draft model legislation that benefits corporations and can be introduced in cookie-cutter fashion in legislatures across the country.

According to documents obtained by the Center for Media and Democracy, ALEC hosted a call on April 22 on the need to reopen the economy with Vice President Mike Pence and 300 state legislators and corporate lobbyists—with promises of future calls with Labor Secretary Eugene Scalia and Education Secretary Betsy DeVos.

Many Republican state legislators have encouraged the anti-lockdown protests in their home states. 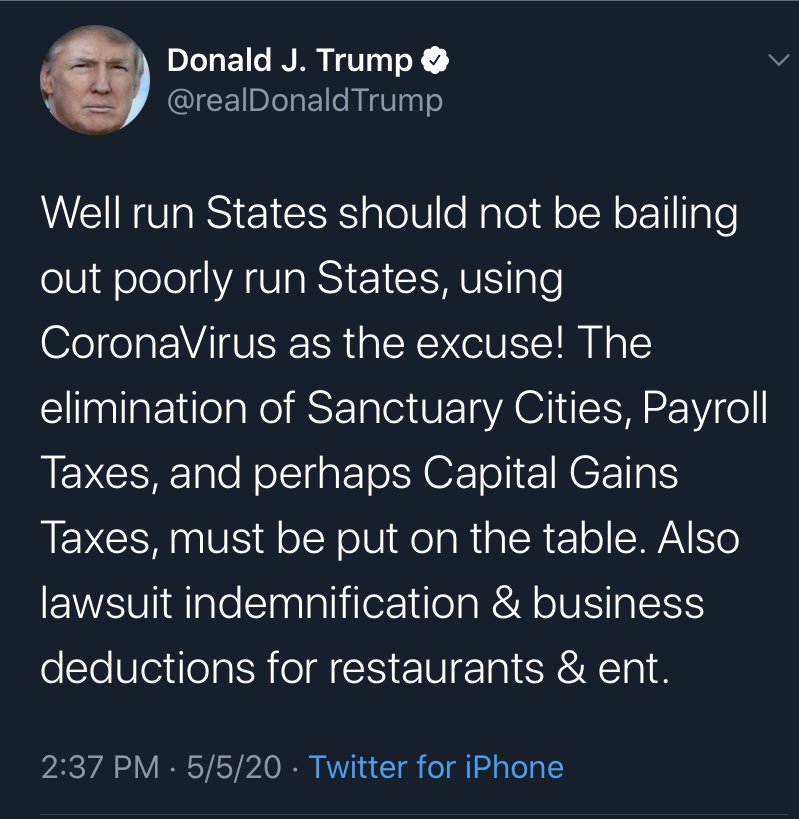 With the pandemic, SPN affiliates are following a playbook they perfected earlier when denying climate change and the link between smoking and cancer: they promote skepticism about the coronavirus death rate and the models used by public health experts to predict the number yet to die.

These claims have been echoed by Trump, who has promoted the conspiracy theory that death rates are being inflated to stop his re-election.


The pandemic response has fallen on the shoulders of state governments. Those hit hardest by the virus now face enormous budget shortfalls and the corporate-backed network is leveraging the moment to push austerity everywhere.

Michigan, for example, is estimated to be $1 billion to $3 billion in the red. The Mackinac Center, a corporate-financed SPN affiliate, has published an austerity wish list of items unrelated to the pandemic. It includes laying off a quarter of the state’s “non-essential” public employees, shuttering local libraries, hiking state employees' health care premiums, and raising in-state tuition at public universities.

According to Politico, California faces a $54 billion budget deficit and is expected to make dramatic cuts if it doesn’t receive federal assistance, including $18 billion in cuts to schools and community colleges. Of course, schools need more funding to make social distancing a reality on campuses if they want to reopen.

Now that many states have started reopening, the unemployment benefits granted during the lockdown are one of the first casualties.

Over 36 million newly unemployed workers applied for state unemployment benefits and the $600 bump from the federal government through the CARES Act’s Pandemic Unemployment Assistance (PUA) program.

Concerned that too many people are still too scared to go back to work—or that they are too comfortable on unemployment—the Department of Labor expressly forbids workers to receive funds from PUA if their employer reopens.

According to the DOL’s website, “voluntarily deciding to quit your job out of a general concern about exposure to COVID-19 does not make you eligible” for federal assistance. (The bill does contain language allowing you to apply for or continue to claim benefits if you have a child out of school or a sick relative to care for.)

A number of states have issued fraud warnings—and they tell employers to report workers who don't return.

Nebraska’s Department of Labor published a digital poster for employers to share with employees that threatens prosecution for fraud. Alabama issued a press release featuring a photo of handcuffs with the word “FRAUD” emblazoned across it. 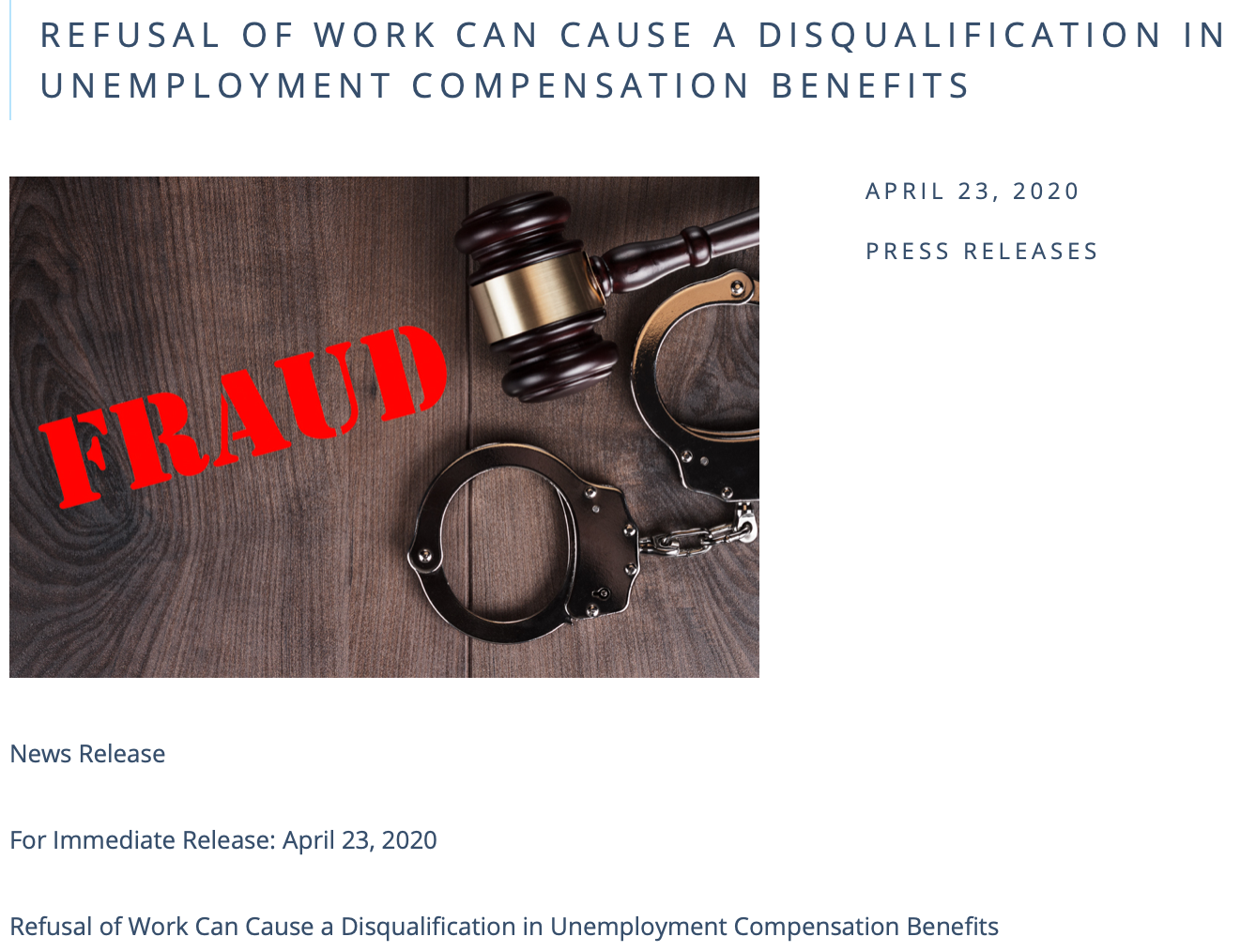 The fraud statutes in many states are incredibly punitive. In Michigan, for example, anyone convicted of unemployment fraud must pay back up to four times the amount they received plus 12 percent interest.

The California Policy Center, another SPN affiliate, is advocating to transition the public employee pension system from a defined-benefit plan, which guarantees retirees a monthly payment, to a defined-contribution plan, where the employer is only on the hook for a certain amount into each employee’s retirement account each month. If the total runs out after the worker retires, too bad.

These policy proposals are reverberating throughout the SPN network, resulting in a growing chorus of conservative think tanks and politicians calling for states to abandon their commitments to their workers. “Just say no to a pension bailout” wrote the Beacon Center of Tennessee. Senate Majority Leader Mitch McConnell has gone so far as to call for states to declare bankruptcy so they can walk away from their pension obligations.

Economic relief for state and local governments is at the center of talks for the next relief bill in Congress, but McConnell has declared shielding private employers from liability for reopening a mandatory condition of any further federal stimulus.

The call for employer indemnification and tax cuts for the rich as a condition of further relief has been echoed by Trump.

Reopening the economy absent a national testing program is deeply unpopular. A majority of Americans believe our tax system is unfair and taxes should be substantially raised on corporations and the wealthy.

It's not incidental that Stephen Moore values capitalism more than democracy.

Employers and politicians force their policies onto the public by forcing us to choose between two bad options while maintaining the illusion that there is no alternative: Either work unsafely or be kicked off unemployment. States must either limit employers' liability or there will be no further stimulus.

To keep the corporate protection racket going, employers and politicians rely on the Godfather principle: making us an offer we can’t refuse.

“BACK TO WORK” ACTIONS

The “Open the Economy” rallies in Michigan, Minnesota, Virginia, and elsewhere take a page from the “Back to Work” actions promoted by employers to break strikes in the 1930s.

These actions were part of the "Mohawk Valley Formula" developed by Remington Rand to break a strike for union recognition in 1936-37.

Priscilla Murolo teaches history at Sarah Lawrence College and in the Union Leadership and Activism program at the University of Massachusetts.

Chris Brooks is a staff writer and organizer with Labor Notes.chris@labornotes.org
Related
Striking Massachusetts Nurses Outwait Corporate Giant Tenet »
Bay Area Transit Workers Organize for Hazard Pay, Build Toward Contract Campaigns »
Whose Safety? Our Safety! »
Steward's Corner: How to Bargain for a Healthy and Safe Return to the Workplace »
Workers Have Leverage. It's Time to Use It. »