South Korea: After 12 Years of Protests, Women Workers Get ‘Dream Jobs’ Back 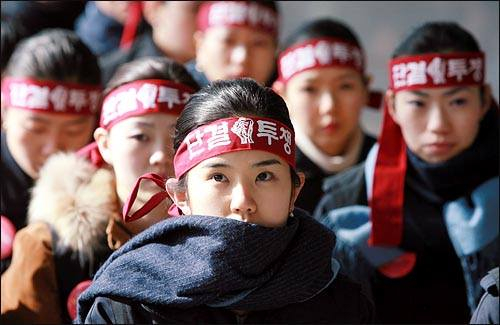 After 12 years of campaigning against unjust layoffs, 180 female attendants at South Korea’s premier train service are getting their jobs back, having defeated a ham-handed privatization effort and corrupt political collusion. Photo: Labor and the World

After 12 years of campaigns and protests against unjust layoffs, 180 female attendants at South Korea’s premier train service are getting their jobs back. These tenacious women workers defeated a ham-handed privatization effort and corrupt political collusion.

The KTX is South Korea’s answer to bullet trains. The country’s Railroad Administration launched it in 2004 and selected 351 female attendants, all in their twenties, from a pool of 4,600 applicants who dreamed of becoming “flight attendants on the ground.”

For these young college graduates, the job seemed to combine the job security of a civil servant with the pay and dignity of a flight attendant—one of the better jobs then available to young women in South Korea.

A lengthy standoff began in 2006 when the Korea Railroad Corporation (KORAIL) laid off 290 KTX attendants as part of its now-botched privatization plan. Now the standoff has finally ended. The corporation said on July 21 that it would hire back the attendants over the next year.

Contrary to their expectations, the attendants were hired by a food catering arm of the railroad administration on a temporary nine-month basis until year-end in 2004. The government agency promised that they would be hired full-time when the administration became a state-owned corporation, a preliminary step toward privatization.

But in January 2005, after the administration became state-owned KORAIL, it did not hire the attendants directly. Instead, the catering arm, which now became a KORAIL subsidiary responsible for KTX passenger service, offered the attendants a one-year temporary contract.

By the end of the year, almost all the attendants (393 by then) joined the Korean Railway Workers Union (KRWU), which is part of the Korean Confederation of Trade Unions, the more progressive of the country’s two rival union federations.

In March 2006 they walked off the job, demanding full-time status at KORAIL. That May, the subsidiary laid off 280 striking attendants who rejected the contract that would annually renew their temporary employment.

This was how their 4,526-day campaign started. Here is a quick rundown of their major protests:

In May 2006, the police arrested about 80 attendants who occupied the Seoul office of the KORAIL.

In January 2007, KTX union leaders began a sit-in at the Seoul central station, which lasted on and off until this July.

In August 2008, three unionists staged a sit-in on the top of a lighting tower at the station, which lasted more than 20 days.

Over time, 100 workers dropped out. The remaining 180 continued their protests in a variety of forms—such as leafletting, sit-ins, and teach-ins—while they went about their lives, started families, and got new jobs.

Meanwhile, KORAIL’s attempt at privatization backfired, as engineers and maintenance workers mounted resistance. In December 2014, railroad workers staged a 22-day strike, the longest such stoppage in the country’s history, against KTX’s plan to spin off the most lucrative portion of KTX. Management dismissed 98 workers and formed STX, the spinoff.

However, KORAIL had come to understand that labor resistance would make any further privatization attempt prohibitively costly. Also, its privatization plan turned out to be clumsy at best. The STX now suffers low margins, prompting the government to float a proposal to merge the spinoff back into the KTX.

After the lighting tower sit-in, in November 2008, 34 of the KTX union members filed a lawsuit asking the court to determine whether they were employees of the KORAIL.

A year later, the court ruled in the workers’ favor. It was a milestone victory for all workers in South Korea, where once-good jobs had been becoming more and more precarious and scarcer and scarcer.

Management appealed the decision. The women had to wait another two years until 2011 before the appeals court upheld the earlier decision. KORAIL paid the attendants four years’ worth of back pay but did not reinstate them. It brought the case to South Korea’s supreme court. In 2015, eight years after the first lawsuit, the supreme court reversed the lower-court ruling.

KORAIL’s retaliation was swift and cruel. It quickly won an injunction to collect an average of KRW 86.4 million ($76,000) that it had paid to each laid-off attendant.

In March 2016, a 36-year-old former attendant plunged herself to death, leaving a short note to her three-year-old daughter: “I am sorry, my baby. All I can leave with you is debt.”

Into 2017, the political balance began to tilt toward the KTX attendants’ campaign. In March, amid months of mass protests, the country’s constitutional court impeached President Park Geun-hye, who used her shamanic friend to receive massive bribes from corporations. Three months later, the country elected as president Moon Jae-in, a former student activist and human rights lawyer, who, among other things, promised the reinstatement of KTX attendants.

While praised as a mediator over a denuclearized Korean peninsula between the two volatile leaders, Donald Trump and Kim Jong-un of North Korea, Mr. Moon has remained reluctant in pushing through pro-labor reforms.

The KTX attendants, now in their mid -thirties, waited a year for the new president to make good on his promise. On May 24, they pitched a canopy again at the Seoul station, beginning another sit-in. The workers said they would continue to squat at the station until their reinstatement.

Less than a week into the sit-in, bombshell news dropped on the country: a supreme court justice had twisted the law and made rulings from 2013 to 2016 to please the now-impeached President Park. Among these rulings was one against the KTX attendants in 2015.

Following the news, on May 29, tens of former KTX attendants, waving the picture of their union sister who had taken her own life, attempted to occupy the supreme court.

Prompted by what is shaping up to be the worst judicial crisis in the country’s history, KORAIL initiated dialogue with the union and decided to reinstate the 180 workers.

“We wanted to prove that we were not wrong,” said Kim Seung-ha, a shop steward with the KTX attendants’ branch of the KRWU, commenting on the reinstatement.

Kap Seol is a writer based in New York.

CORRECTION: This article has been updated to reflect that 98 workers, not 200, were dismissed after the December 2014 strike.